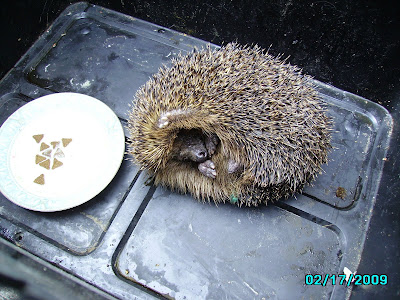 When we returned from Mum's 80th birthday party last weekend, Mollie immediately made a bee line for an old rack in the hall. On the bottom rung were some old sheets, but Molls sniffed and sniffed so I pulled one out – and shrieked. There, rolled up in the back, was a large hedgehog.

We took it outside, put it in a box and inspected it. It was crawling with fleas and tics (lovely) so I fled back inside and sprayed everything with anti-flea spray- with Moll's itching I'm not risking anything – and threw all the sheets in the washing machine.

Then we tended to Mr Hedgehog who, I have to say, had the twinkliest eyes and the neatest little hands I'd ever seen. We fed him milk and biscuits and were going to take him out to the workshop and let him go there but Himself was concerned about the tics. So we rang the RSPCA who arrived an hour or so later, assured us that all hedgehogs are infested with tics and fleas, and took him off to release him in pastures new.

Shame, I was quite getting used to our new friend – it had such a lively, intelligent face - and apparently they're great for eating slugs. But it will be happier out running free, even if it doesn't get free food.

Many thanks to all re Moll's predicaments. She had her blood tests, at vast expense, and we should get the results soon. As for her legs, well it's both knee caps that are dodgy, so it's shorter but more frequent walks, no jumping and lots of swimming. Surgery is something that we might have to consider at a later date but I'm trying not to think about that right now.

The most extraordinary thing is that I pitched an idea to my editor yesterday to write a piece on the Bowen Technique for dogs. She said yes - an ideal one for me. And now I've been researching it, the technique is something that Mollie's leg condition could really benefit from. Is that divine intervention or what?
Posted by Flowerpot at 12:16

I'm glad to hear that some of Moll's ailments are improving (wierd becaue my histamine rash has cleared up too) but I do hope for all your sakes that no op is required.

What dear little hands that hedgehog has - I had no idea! Great photo - and aren't you kind to look after him so nicely?

Poor Molly. Grumps has a bad back and shouldn't jump either, but it's hard stopping him as he is a bouncy little devil.

Love the photo of the hedgehog, so cute, despite the thought of fleas and tics.

Chris - I know those hands are jujst gorgeous! And where animals are concerned, they always get well looked after here!

What a cute photo - shame you couldn't have sent him here to eat up the hundreds of snails that do a slimy dance in my garden, when it rains.

Lucky for Moll that her sniffing didn't end in a quill up her nose! LOL
Glad to hear she's not doing too badly. :)

Debs - there's something very appealing about hedgehogs isnt there?

Rosiero - there are enough here thanks!

Ak - yes I was just waiting for a large squeak!

After reading of Moll's itches and then the Hedgehog with fleas I am sitting here scratching myself to pieces. Glad that Moll's skin is getting better though.
I have Eczma so do sypathise with Molls, incessant itching can drive a girl potty.

Hope all are well down your way Flowerpot!

That's a cute little feller. How on earth did he get inside the house?

Wish I could find something that eats slugs; now that the rains have fully arrived the place is crawling with the revolting things. One crawled up the wall and came through the kitchen window. Ugh.

Trubes - yes I was itching all evening after the interloper'd gone! I am so sorry to hear about your eczema - really horrible condition.

Liane - oh i forgot to say, we think he must have come in through the cat flap! I hate slugs too...

oh poor molly :( - cute about the fleabag hedgehot though, I wonder why they are so full of fleas and tics, we have one that sometimes scrurries around our back garden, but Ive not seen it for a while...

LOL@the hedgehog coming in through the cat flat, thats like our chicken Janet LMFAO.....

He's beautiful - even with the fleas! I was woken in the middle of the night last year with the most horrendous grunting noises coming from the garden. I gingerly investigated and spotted two huge hedgehogs gearing up to do what comes naturally!

Marmie - yes I wondered why they have so many tics and fleas - should ahve asked the RSPCA man.

Table - I wonder how they manage without getting spiked!

I love finding hedgehogs on my doorstep. I hope you had a wonderful time with your mum.

Ellee - doorstep is one thing - moving in is another! Yes we had a grand time, thanks.