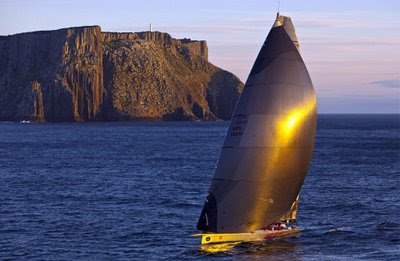 The above picture is more what Himself has in mind when you mention the magic word Boat, but unfortunately funds are a little pressed, so we now have the blow up boat which Himself is, this very morning, intending to inflate.

He doesn't seem very excited, given the amount of time, energy and money that's gone into it but I guess this is because it doesn't have a sail. There's a lot of talk about Getting On The Water and how it Doesn't Matter not sailing (oh, yeah?) so I only hope this machine won't end up in the harbour. At the bottom. For someone who has sailed all his life, and found great freedom in doing so, a paltry engine really isn't the same, but needs must...

He's also not been well. His lungs are bad and as this is caused by scarring on the lungs, there's nothing that can be done. Well, having said that, he's on his second bottle of cough mixture because the one from the doctors (which is free) was no good. Yesterday I heard him yelling, “POP!!”

I hurried next door, wondering what on earth had gone wrong to find him pointing at his laptop. “What do you think of that?” he said, pointing to his laptop screen. On it was a picture of Benylin bottles. “Are they any good?”

“I've taken it for bronchitis,” I said. “But what about the stuff from the GP?”

“No good,” came the curt reply. “Bloody stuff. I need this stuff – it's for a different kind of cough.”

Leaves on the line came to mind but I kept quiet while he hurtled down to Superdrug before it shut. Returning, he slammed the door. “Five pounds forty,” he muttered, throwing the first dose down his neck, followed swiftly by a beer. “Let's see if this does the trick.”

Of course on the outside it says Do Not Drink Alcohol with this. But he's still here. And not coughing quite so much. So who knows?
Posted by Flowerpot at 10:36

Oh, so sorry to hear that Himself is having a tough time... that approach to self-medication sounds familiar too!

Berlimey, I bet the sail in that photo you've posted is worth more than our whole boat was!!

Make Himself some sage tea and stir a spoon of honey in it to take away the fould taste!

It really helped me when I had a bad bout of bronchitis.

Fisherman's Friend is good for coughs, particularly when you are on high seas! LOL. And a lot cheaper too.

LOL I think the beer made him better! The best cough medicine I've ever had is the pharmacist's own concoction - never fails for me. I think all pharmacists have one.

Oh dear, sorry to hear he's not well, but Benylin is good stuff so fingers crossed it works, or at least helps make him more comfortable.

Chris - what is it with men and Heal Thyself? And yes, I shudder to think how much that sail's worth!

Pat - that's a great tip. Thanks I will definitely try it.

They are a worry - good job we love them. Hope something worked and he's fedeling a bit better.

Well a hot bowl of water and a towel over the head really helps clear the lungs a treat. Just stick a few drops of Albas oil in and he'll sleep like a baby, especially if he has a hot toddy afterwards! Hhappy sailing, it is simply the best fun.

Addy - that is a very good idea. I will get him some.

Shelagh - yeah, well you know him!!

Ak - that's interesting. Didnt know they made their own - will ahve to research that...

Poor thing feeling so grim. I do hope the Benylin worked.

MOB - I tried him on inhalations a few weeks ago - thanks for reminding me. Time to go back to them methinks!

When my husband takes it, he swigs the Benylin straight from the bottle!

Oh, you make me laugh. I'm thinking the beer chaser is actually what made the cough syrup work. (GRIN) Beer makes it all better. Loved the picture of the boat. Don't know a thing about sailing except that I like being on a boat with someone who does. I hope the launch of his dingy is successful and may he have wind in his hair so he can pretend to sail!

Thanks Sandra! I don't know much about boats either - I leave that to Himself!