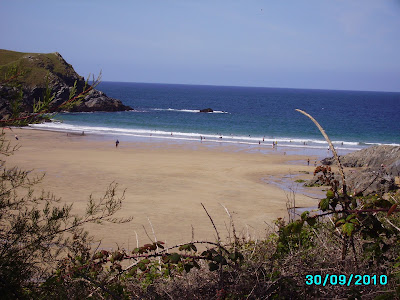 Last Friday Molls and I set off to be film stars.

I’d had a phone call the previous week out of the blue, from a freelance film director who was doing some work for Visit Cornwall. He had read my blog and said “you have described Polly Joke so beautifully” that he wondered if I would take part in his film. Well, as any writer will tell you, those words are magic to the soul. Of course I said yes and we fixed last Friday as the date, dependent on the weather.

As luck would have it, Friday afternoon revealed skies of a perfect Wedgewood blue, streaked with mare’s tail clouds. I met Gareth in the Bowgie car park and we headed down towards the beach, him stopping to film en route. The tide was far out, so we had a clear expanse of golden sand which Molls adores, and he interviewed me by the waterline, then filmed me and Molls walking and running along the beach. We then had a paddle, walked back up to the pub and had a drink in the sunshine. Overall it was a fun afternoon and getting paid petrol money to spend the afternoon on your favourite beach, particularly if it might lead to some publicity, can’t be bad.

There have been a few disappointments recently - as there always are in life. But life is full of ups and downs and one particular disappointment could be, I am guessing, a blessing in disguise. Who knows? At the moment life has a habit of throwing the unexpected at me so I can only go with it. And enjoy what there is to enjoy. Learn from what there is to learn.

Tomorrow we start singing again having had a summer’s break, and I can’t wait. I’m off to a gig of All the Fires on Friday night (which is where I will give The Dress its first outing) then my choir are singing at a gig on Saturday afternoon in Penryn. Music is back in my life!

And dear Joe from upstairs rang this morning to say he’d been down to the pub last night and got me a dozen eggs which he had left outside my back door. “How much do I owe you?” I asked, very touched that he’d done this.

“They were a pound but I don’t want the money,” he insisted gruffly.

Recently I’ve been more aware than ever that I am incredibly lucky to have such a wonderful bunch of friends.

What a lovely uplifting post. Your fame along the ocean shores sound very promising.

I should tell you that I've mentioned you in my blog post today.

Thanks CJ - will go and check you out now!

I know a film star! Beautiful beach and lovely to hear your upbeat voice.
lx

Liz - well actually it's ging to be on thee Visit Cornwall website. So sort of film star!!

That's a gorgeous photo and yay for film stars! And fresh eggs!

Polly Joke has to be one of the most beautiful spots in Cornwall I reckon, Talli.

A lovely upbeat post that was, as usual, a pleasure to read. Glad the weather was kind for your filming and that it was a good experience.

I can't sing this week but will see you next. Enjoy the 'start of term'

OOooooh my friend Flowerpot is a film star! :)

I'm so pleased for you on all counts m'deario. x

Thanks Sally - glad you enjoyed it. Sorry you can't make singing tomorrow but see you next week - or on Sat at the gig?

Ak - thank you so much! Actually it will be on the Visit Cornwall website, not a Film film if you know what I mean!

Good friends are so essential in this world, aren't they? I'm glad you have some truly excellent ones. :-)

Melissa - good friends really do make the world go round!

Ooh, that's exciting stuff! The positives do tend to outweigh the negatives, don't they?

What a fun time being filmed, singing and free eggs. It's lovely to hear about all the exciting things you've been doing. So happy for you and Molls.

Liane - they certainly do. But I do tend to be a glass half full kind of person. Makes life much more enjoyable!

This really sounds like a fun day, and you're right about just going with the flow of life when the unexpected happens--I need to do more of that.

I hope you've continued to have a good week!

Kim - I don't think I've had any option but to go with the flow! It makes life more enjoyable too.

Thanks, Mandy - hope you are OK. Good to hear from you x

What a lovely post, and how exciting to be a film star. (A web site film is the same as any other film - you're a star!)

Lovely story about the friend with the eggs. We sometimes take our friends for granted, don't we? We shouldn't.

Thanks Shirley - and you're right. We shouldn't ever take our friends for granted.