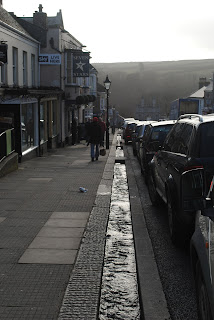 This picutre has nothing to do with this post but was taken in Helston on the way back from a lovely hostelry called the Blue Anchor. "Look," said Mr B. "There's a good shot."

Last week I was fortunate enough to see Matthew Bourne’s production of Sleeping Beauty at the Hippodrome in Bristol. For those of you who aren’t balletomanes (and I know many aren’t), Matthew Bourne’s ballets are most un-ballet like, as reflected in his audience, which ranged from age 8 to 90, of both sexes. He is an incredible choreographer, who tells a story with great wit, tenderness and drama. I was trying to describe it but it works better as free verse. I'm nervous about this as I've never written verse before, but it doesn't work in prose, so here are a few lines:-

When the curtain goes up
Everyone’s hushed, transported
On a spellbinding, magical visual feast
That surprises and delights
Every sense.
The costumes – Gothic at first
Then Edwardian, now hoodies and jeans.

The music – haunting and lyrical
Dramatic and wrenching –
Tchaikovsky at his best.

The dancing – feather light,
Dashing, dramatic and witty
From the King, the Queen,
The Princess, the Woodman
And the Vampire

All brought to a crashing finale
Where love conquers all
In the most tender scene
Imaginable:
Hands caress cheeks
Reach out for each other
Love stretching over 100 years

Happily weeping
At the end
Clapping shakes the building
As we shuffle out
Walking through the dark city streets
With my dancing feet
Music pounding through my head
And love in my veins.

Lovely evocation of the evening. :)

Thanks Sally - though words really don't do it justice!

I've never seen a live Ballet but i would love to, it's so elegant. :)

Ak - well his ballets are much more informal than most - and more accessible I think.