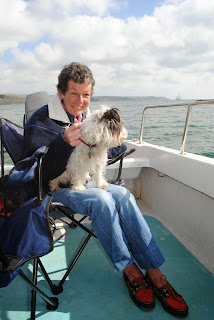 The trouble with words is that you never know whose mouths they've been in.
Dennis Potter, dramatist (1935-1994)

I can go along with this as I’ve been doing some work to do with eye care in Western Australia. To start with I knew nothing about WA and very little about optometry (though I have worn contact lenses since I was 17 so I have scant knowledge/interest in eye care).

Now I know a lot more. My brain cells have been severely - but enjoyably - stretched and I would love to go to Perth. Just my sort of climate and an outdoor life I would love. Don’t know that it would suit Moll though…..

On that note, dear girl has the beginnings of cataracts, though my lovely vet said it’s not interfering with her vision much at the moment and shouldn’t too much as she gets older (she’s 10 now). While the operation for human cataracts improves by the moment, it’s not so good for dogs so that’s not an option. She’s visibly slowed down a little - though I guess by 70 (in human years) she’s entitled to - but still remains as irascible and loving as ever.

Wherever we go, people always comment on her. Mr B says “she’s a very clever dog,” while Pip used to tell everyone, “she’s very bright you know”. I just think of her as my Moll, and one of the mainstays of my life.

I never knew dogs could snuggle into your life and steal your heart like this.

I definitely miss mine, but must confess I am enjoying my freedom to go where I like at the moment without having to worry about the dog. They do steal into our hearts and leave big gaps when they go.

Addy - I can imagine enjoying the freedom. But I don't know that I could be without a dog now!

I love that last line - it's the same with cats! Lovely to see you today - sail soon! xx

Sally - we're both really sorry not to be able to sail next week - but very soon!

Hi Sue,
just had an enjoyable 'catch up' read of your blog, interesting and makes me want to have another holiday in Cornwall.
Moll's is such a sweetie and when the time comes I'm sure the vet will be able to sort her out. My daughter's 8 year old pug has had his done and to great success!
That's a great picture of you and Molls, you looks very young and spritely !
Best wishes,
Di xx

Thanks Di that';s v reassuring. And the picture was taken a few years ago now!

Moll is endearing herself to everyone...especially me.

Rena - glad to hear that!