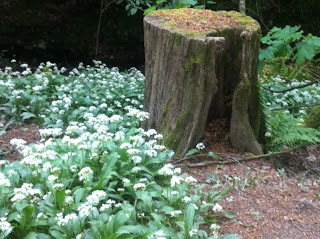 Despite the weather forecast groaning that this was the coldest May bank holiday - it wasn't in Cornwall, she says smugly. Usually when the rest of the country has a heatwave, we don't, but while there was a bit of wind, we had glorious sunshine and a few good spring walks. I was also lucky enough to sing at a 100th birthday party/climate change protest on Sunday on Gylly beach so for all those watching Spotlight on Sunday night - yes, I was there!

We bought a van - oh, it must have been about 12 or 13 years ago now. The idea was to go camping in it and also use it for Pip's tools, as he was doing maintenance and odd jobs for a friend of ours who had a business letting houses to students. Oh, and to collect wood for our woodturner.

Well, we did go camping around three or four times but as it's not a designated camper van, when we wanted to go to bed we had to remove everything from the back, put it all in the front (which meant piling things up all over the place) and in the morning reversing the process which, as Pip wasn't feeling too good by then, was a pain. So that was the end of the camping. But it remained good for everything else and, as I have a very long back, I find it much more comfortable for driving.

When Pip died, my dear Mum said (hopefully), "So you'll want to get a car then?" to which I replied, "Oh no, I like the van." Which indeed I do. Plus, of course, it was and is a link with Pip.

Someone else, on first meeting me, said, "Oh, you could get a nippy mini or something more suited to you as a journalist." I said again, "Oh no," thinking, well you don't have much idea of me at all... Those of you who do know me, realise that image is not something I am interested in. I remember delivering something to Cornwall Today, in the days when I did a lot of work for them. Editor Kirstie Newton looked out at Pip, in the driver's seat, and said, "It's very.... industrial" which I took as a compliment. After all, it was once a South West Water van.

After Pip died I was still very nervous about driving but there was no one to drive me to interviews or whatever, so basically I had to do it. Which was terrifying, but I managed and also in a van I feel safer as I'm higher up, with better visibility. So I have the van to thank for keeping me safe.

Everyone always moans about White Van Man, but as a White Van Woman, I have become aware of White Van Etiquette. We give way to each other at cross roads and roundabouts. We smile at each other (especially when they realise it's a woman driving a white van) and acknowledge each other, so altogether I feel much happier as well as safer driving my white van.

So next time you see a white van, check if it has a blue stripe down one side (only). If it does, and it's an old van it could well be me. In which case I will smile and wave, probably let you go first. I just hope my dear van will continue to look after me for a few more years yet. 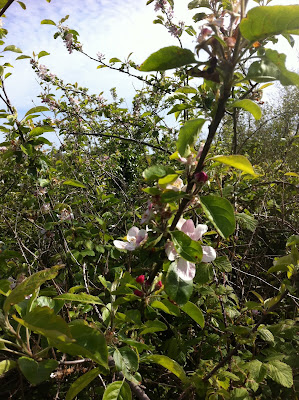 I don't know why people moan about white vans, I've always experienced that if anyone is going to be courteous in traffic its going to be a white van man (or woman). Now, taxi drivers and cyclists - don't get me started!

I don't know why people moan about white vans, I've always experienced that if anyone is going to be courteous in traffic its going to be a white van man (or woman). Now, taxi drivers and cyclists - don't get me started!

What a lovely post. If you are happy in it, then why change it? I have a similar dilemma. My Nissan Micra is now 20 years old and has just passed its MOT again with nothing wrong. But it is 20 years years old. I get flash BMW and Audi drivers roaring up behind me and i can feel their eyes boring into the back of my head, saying "Move over in that decrepit thing". I answer back with the eyes in the back of my head "I could buy several of your make of car with cash, so don't judge me!" I am happy with my little old car. It wraps around me like a second skin, but I know change must come, as I don't want it to fall apart on me when I most need it.

SIL - we have had, haven't we? Glad your white CRV is going well - that's how I feel about my van! Hugs xxxx

Wannabe a writer - I'm glad you\ve had good experiences with white vans. I agree about taxis and cyclists though!