An artist and novel changes 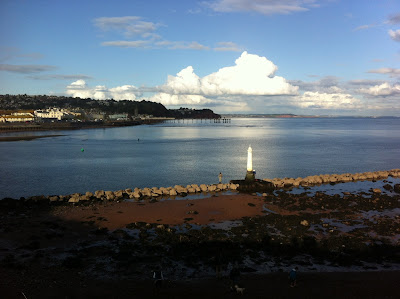 I had a lovely weekend away and although the weather bucketed down on the Friday, it cleared up and we had a fabulous walk along the beach - Moll went bonkers, having been cooped up in the van for hours. And later found a pub called the Jolly Sailor which was dog friendly and provided very good food and wine at decent prices.

On the way back I had arranged to interview the artist Amanda Hoskin for my next book. We met at the pub in Charlestown and she was lovely - as well as being a dog lover which was fortunate as Moll was in on the act. She has also asked me to write the introduction for her next coffee table book which she is working on - so we can help each other. Do have a look at her work - I think it's fantastic. If I could afford to buy her work I would!

Apropos of nothing, I was given a big plant which has suddenly exploded into flower. They look like baby chrysanthemums and are really joyous at this time of year when little else is flowering. 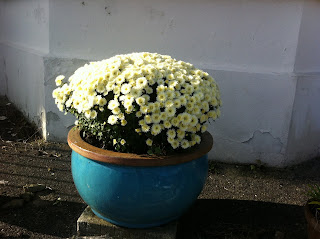 Just before we went off for the weekend, I'd had some severe comments back about my novel. The previous comments I'd had were all very complimentary - loved it, thought it dealt well with difficult topics and deserved to be printed. But someone else (who I trust, having helped several other people I know get published) was much more harsh.

She's certainly taken a lot of trouble and thought and finally came back saying what she thought I should do, which is ditch a lot of the plot and start the entire novel earlier in the timeline. Which means a huge rewrite. I was really confused, having had two such different comments but talked to another author who said she'd had exactly the same thing. I need to do what's right for my book, and I am mulling through that, but I do believe she's right. And while it does mean a lot of rewriting, I know all the stuff anyway having done detailed character biographies when I started out.

In her words, this should "make a decent novel" so I need to take time to mull it over and figure out how to do it. I've just been landed with some work which has to be done by the end of October so that will stop me rushing the novel.
It does go to show how difficult the whole process is - it really depends who reads your work and whether they like it or not. 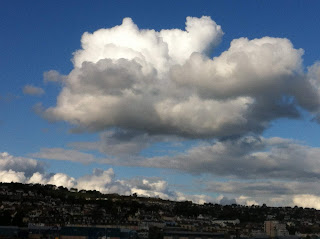 The Love Of Nostalgia said...

Beautiful photos. Remember that is just someone's opinion of your book, someone else may love it the way it is. Good luck which ever you decide. Jane xx