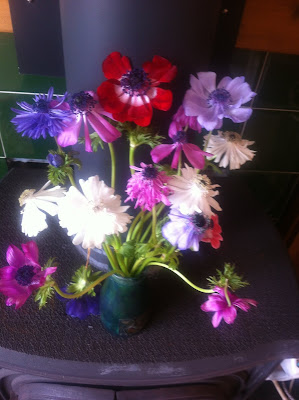 As this is a rather dead time of year in terms of flowers, I found these -a bunch of anemones in the summer. Roll on longer days....

Despite the recent upheavals, I’ve nearly finished rewriting the first three chapters of my novel and can send them off at the end of the week for further comments. I’ve found this really difficult to do, though once I got into the swing of it, it was better. Like anything I suppose. I'm not overly confident about what I've written, but I'm aiming to send it off to my mentor who I hope will be able to point me in the right direction.

I’m aiming to finish the rough draft by Friday morning when, crossing fingers and toes and barring any further disasters, I am hoping to go away for four whole days to a caravan park near Bude. I know, a couple of weeks in Greece or Spain would have been preferable, but that didn’t happen this year, so Bude it is.

And frankly, I am just desperate for a break. The weather forecast isn’t brilliant, at least for the first two days, and keeping two dogs clean and dry in a caravan could be a challenge, but it will be good to get away and explore a bit. I’ve looked up the nearest vet in case Moll is poorly and am packing Scrabble, books and cards plus we will take wine and grub and DVDs and aim to just go and relax.

When I first started working for myself, I got very stressed and run down and a friend said, "Just because you're working for yourself doesn't mean you don't need holidays. You should aim to get away every three months."

Wise advice which I didn't heed this year - though admittedly that wasn't entirely my fault, being let down twice. But next year I am going to plan holidays better. I’ve got my writing trip in Spain in February which I am looking forward to - though that will be a lot of hard work. And hope for another French trip, and also some trips with my Moll. If the weather improves later on in the year I will take the van and go camping with some friends down the road who also have a little campervan. So that’s a rough plan. I live in distrust of making Big Plans as life has a habit of turning them inside out and back to front. So loose plans are best, I find.

My dear upstairs neighbour is - again fingers crossed - going in to have his hip operated on tomorrow. It’s already been postponed once which caused a lot of stress and grief, so I really hope it all goes ahead tomorrow. We’ve been trying to organise him being taken there and picked up - I was going to do the latter but I will be in Bude. So far we’ve got the drop off organised and are working on the pick up and aim to make his recovery as smooth as possible, bless him.

And lastly - courtesy of a very kind friend, Moll is now in receipt of not just one but two ramps which should mean she doesn’t have to jump into the van, or up the steps. She’s taken to the van one like a duck to water (somewhat apt in this weather), though the steps one is a bit slippery so may need some adjustments.

But life’s all about adjustments, isn’t it? 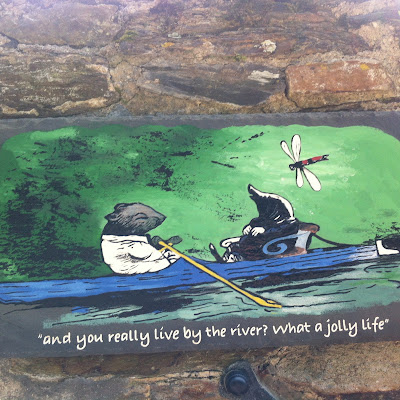