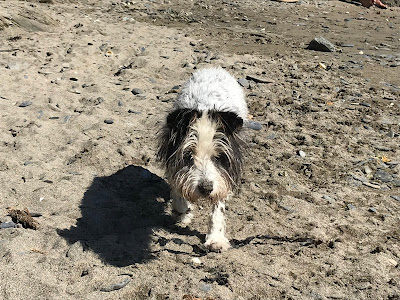 Thank you so much for all your comments - they mean a lot.

As you can imagine, Thursday was a bit of a fraught day. The vet rang at 9.30 to see if I'd like to bring her in earlier as they had a cancellation, so I had to take her there, ring from the car park, while someone from the surgery, in PPE, picked her up and took her off. And that was the last I saw of her for six hours.

Luckily the heart surgeon rang before and after the scan to ask what had been going on etc. and he said he thought she'd probably just had a bug. Certainly after several days of very little exercise, her energy levels have bounced back which is lovely to see. Moll has a heart murmur which could lead to congestive heart failure - this is essentially when fluid accumulates around the lungs. (This is how Pip died, so I am praying this doesn't happen to her, bless her.) So I monitor her breathing once a week while she's asleep and as it hadn't changed, this seemed a good sign.

Having done the scan he said no, the heart isn't enlarged, she's no worse than she was nine months ago, and she doesn't need to have another scan for a while. Unless her breathing changes or I see anything else I'm worried about, in which case bring her in straight away. I suspect that she led them a merry dance in there as she gets very stressed at the vet anyway, let alone when they're trying to sedate her and do scans etc. The scans are also incredibly expensive so I will be glad for her not to have any more for a while.

So she's back and, to my amazement, the next day she was firing on all cylinders. Had her first proper walk for a week and loved it. Since then her energy levels have been amazing - especially as it's been hot - so we've walked later, in the cool, and the last few days we've both been swimming which has been fantastic.

I am so relieved and delighted and amazed to have my little companion back with me and walking alongside me. Bouncing and swimming alongside me, in fact. I can't tell you the difference it has made.

There were other things going on last week that were very stressful and unfortunate, resulting in more sleepless nights and a lot of tears. But having Moll back to her occasionally grizzly self makes me a very happy woman.

She is snoring on the bed behind me as I write: the one loving constant in my life and I am so glad that we have some more time together. Time that I hope to make as joyous as possible for both of us. 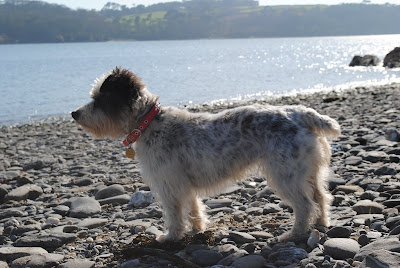 That is such good news, well done Moll.

So pleased to hear this.

Oh Sue that is brilliant news, so thrilled and happy for you both♥ Linda xx

Thanks everyone, much appreciated!