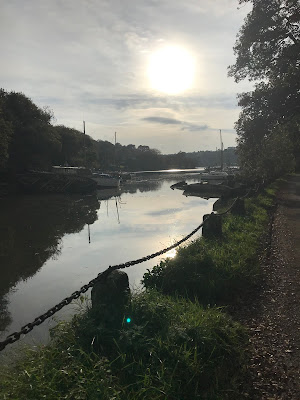 Well, we all need a purpose, don’t we? I certainly do, especially while the world is so uncertain. It might just be Get Out of Bed, on those days when everything seems too much. Or Read a Book. Or Eat something. (Or Not Eat Something.) Anyway, you get the gist.

On Sunday the Tooth Fairy and I set out to look for a van for me. Those of you who follow me regularly will know about Vangate which occurred nearly a year ago. Basically, while we were away for the weekend, the van broke down and I ended up spending £400 only to find that the problem still existed. This went on for 8 weeks and the problem is bypassed rather than fixed. Anyway, the long and short of it is that I’ve spent a lot more on the van this year so I’m thinking it’s time to look for a new one.

So we set off, driving through wind and rain while the Tooth Fairy read the map on my phone. He’s not used to an iphone cutting out every few minutes and having to put my security code in and there was a lot of cursing. Also, being a man, he hates not being able to find where we’re going. (I just cheerfully say, oh let\’s go somewhere else, but he won’t have that.)

We eventually found several garages but they were shut, as it was Sunday afternoon - still we got a good idea of what was around and then decided to have a walk on the way home. We came to Blackwater, one of the quietest hamlets I’ve come across, just off the A30, and it was like stepping back in time.

It was incredibly peaceful. Birds, no cars, no people. An old fashioned village shop. A long grassy area like a village green with benches, and a polite notice asking people to keep a 2 metre distance when walking in the village.

We walked up a lane and the sun burst forth from behind towering castle-like clouds, lighting the fields a startling emerald. Shetland ponies whickered curiously as we walked past, exchanging greetings with Lainy. Further up we came to a house covered in slogans, mainly against the local planning department, it seemed. We walked past tranquil gardens, more grazing horses, and silent gardens where bonfire smoke drifted upwards in a lazy spiral.

We kept turning right and finally arrived back at the converted chapel that is now a house with gorgeous church sized windows, and in someone’s drive was an old truck with a skeleton in the back, with a jaunty hat. On the bumper read a sticker, IT MAY BE A PILE OF SHIT BUT IT’S IN FRONT OF YOU which made my day.

So that was our Walk with a Purpose. We didn’t find a van but we had a look. We didn’t have a very long walk, but the sun came out which is always a bonus in my book. And we found something that made us laugh. You could say that we hadn’t achieved very much. To me, we had a good few hours in each other’s company, found somewhere new and enjoyed time with Lainy. What’s wrong with that? 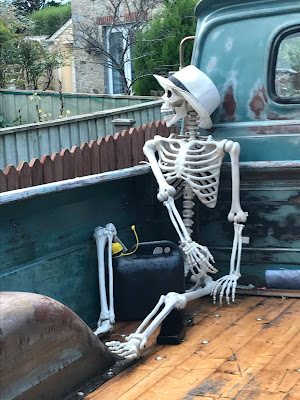 Hello Sue from a fellow Cornwaller and blogger. I have just stumbled across your blog and what a lovely one it is too! It is great to hear about your Blackwater walk. I recently took my car to a garage there and had to wait until it was road worthy again. I wish I'd gone for a walk now (although the weather was awful!). Love that skeleton! Lulu x

Hi Lulu, how lovely to meet you and where are you from? I hope to see again soon! X