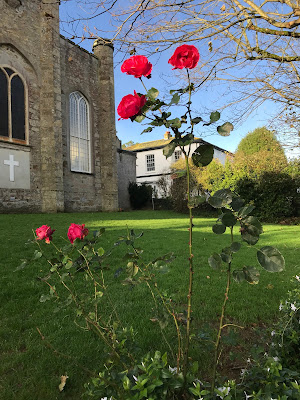 Before you (or I) get excited, I must just say that it's not me having the makeover, but my kitchen.

Until I wrote this, I'd never realised that miniscule kitchens were such a pattern in my life.

I've never had a fitted kitchen - the first flat I bought in London was so tiny it could accommodate one anorexic and that was sideways on. The second flat wasn't much better. Then after I left London, I finally bought a tiny cottage with, again, a minute kitchen. Luckily a friend of a friend was an architect so she designed a very imaginative kitchen making use of every corner (and believe me, we needed it).

Then when Pip and I moved here, there was once again - yes - a tiny kitchen. Luckily he was not only very practical but extremely imaginative so he made the kitchen worktops out of wood which he then varnished, and our other worktop was an old school table that had been raised to the right height with the addition of some wooden balls underneath the legs.

Since Pip died, the table became riddled with woodworm so the Tooth Fairy took it out in the yard and demolished it - it literally disappeared in a cloud of wood dust, there was so much woodworm. Then it went up my chimney. So I lost a worktop area.

And recently I've realised that not only have I no workspace, but that the wooden worktop is really scarred and splintering. It has water damage. It's not easy to keep clean. So I decided it was time for a Makeover. However, never having done this before (I know, at my age it's incredible) and also having very little interest, this did not make life easy.

The Tooth Fairy took me to B&|Q where I nearly passed out at the prices. And so much bewildering choice.... taps, cabinets, worktops, sinks - my head was spinning after 5 minutes and we had to leave. I took one look at the catalogue later that night and again my mind whirled in despair.

"How about looking on Marketplace?" said the Tooth Fairy, which was a much better suggestion. We found an island unit near Helston last week and, while it was too big, it was a lovely afternoon, so we took Lainy on to Godrevy for her first trip so the afternoon wasn't wasted.

Since then the Tooth Fairy and Joe upstairs have both offered to help with the Makeover. We went to Praze-an-Beeble on Sunday to get a sink, then to B&Q to get a worktop and other bits, and now they are attempting to fit the sink into the old plumbing. I'm keeping well out of this.

But hopefully, by the end of the week, courtesy of my wonderful friends, I may have an operational kitchen again. With space. I can't see why people get excited about a Huge Brand New Kitchen, but I shall treasure my new little space..... 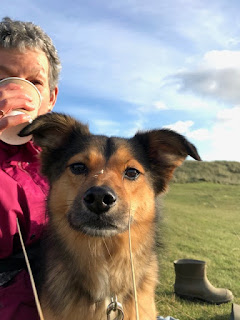 Good luck with your new worktop. There’s nothing more frustrating than having nowhere to place hot pots and pans whilst in the throes of manic cooking. I actually thought I had a small kitchen until I saw Rachel Khoo’s ‘Little Paris Kitchen’ – she is constantly washing up in that programme and rotating items round, plus she has one of those fold up/down beds as seen in 1970s movies. All done with Parisienne style though! Lulu x

Hi Lulu, my kitchen now looks much bigger thanks to clever work by the Tooth Fairy and Joe. It has taken all week and a lot of stress and then the plumber coming but finally yesterday it was finished. Well, nearly....! I must have a look at Little Paris Kitchen it sounds good.. x