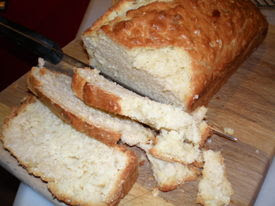 This is not Himself's bread, but comes courtesy of Madison&Mayberry. But it serves to illustrate one of the problems to do with breadmaking.

Himself is now on his sixth loaf of bread in the last few weeks. We’re talking home made bread here, and not with a breadmaker.

The whole process takes between an hour and two hours depending on how long the yeast takes to rise. First the flour – this can be white, wholemeal, granary, organic, non-organic or a variety of those mentioned. This is weighed then mixed with the yeast which can be dried or fresh and mixed in hot water with a variety of ingredients which can include, at various times; salt, sugar, sesame oil, sesame seeds, malt extract or none of these things.

It’s put in a bread tin and left to rise. I get confused with the varying methods – sometimes it rises once, others twice when it is pummelled (sorry, kneaded) and put back in the tin. The actual cooking of the bread takes about 35-40 minutes.

Every time it comes out of the oven it smells delicious. Every time Himself cuts a chunk off the end, covers it liberally in butter and says, ‘Mmmm. Best ever, Pop. This is JUST RIGHT.’

And every time I say, ‘Good darling.’

The next day, at breakfast time, he eats the toast and goes very quiet. Bottom lip protrudes.

‘What’s the matter, darling?’ (though I can guess by now.)

‘It’s the bread. It’s no good.’ Beginning of Sulk.

‘What’s the matter? Tastes all right to me.’

‘No.’ Sigh. ‘It’s rubbish. Too *heavy/crumbly/light/didn’t rise enough/rose too much (select one of these or a selection of all).’ Another sigh as he eats another piece. ‘I’m going to have to make some more.’

The bread is then either thrown out or given to various friends/relations who are less discerning or throw it in their bin.

This has continued over the weeks, interspersed with times when he eats Tesco organic sliced granary bread (it has to be that or nothing). I have made various comments about Waste (that flour is expensive, to say nothing of the cooking time) which as you can imagine, haven't gone down well.

At the moment he’s actually quite pleased with his loaf and is munching his way through it.

Unfortunately I can’t eat it. I find it like Cranks food when it first came out. (For those of you too young to remember this, their bread was Lead Like to say the least.)

As a friend of mine said, “depression is very much like a Cranks cheese scone. It takes a long time to go away.”
Posted by Flowerpot at 09:34

Lovely post FP! I can well sympathise with Mr FP's morning disappointment with bread. I go through the same thing...bread is always best when it comes out of the oven. Still, "Breadbox" is definately the person to offer some great advice if Mr FP needs it.

lol at Cranks! A coffee break there was like penance:-)

You've got to admire Himself's persistence:-)

RT - thanks but you know what men are like with Advice.....

Lane - I remember eating a quiche at Cranks one lunchtime. I couldnt eat anything for about 3 days.

He should be cooking the bread and eating the whole loaf at once, smothered in butter when it's still hot.

Tell me again why he's not using the breadmaker??????

I can't imagine any satisfaction from using a machine to make bread, much more rewarding by hand.

I use a machine to do the first mix and knead, and then do the second knead and rise by hand, before baking it in the oven. Works every time.....!

FP: let me know if you want some recipes sending --- I've taught a few breadmaking classes over the years, and have written the recipes up.

Mind you, my bread is nothing like as quick as an hour or two from start to finish --- more like overnight, these days:-) But it makes *great* toast....
N.

The other place to go for good recipes on breadmaking, and lots of really good advice, is "A Year In Bread". Some wonderful people there run it, and they are really helpful and write well.

ellee - that's just what he thinks.

Breadbox - thanks very much for advice. I don't think there's anything teh matter with the bread - it's him! Everyone else devours his bread with gusto. His taste buds keep changing =- or something.

Just catching up. I think baking bread is a form of therapy. All that kneading gets out a lot of aggression. I know how you feel about your mother. I have a similar quandary with my mother, only she lives 6,000 miles away. Good news about your article and Himself's cancer. I was in Florida in 1977 so don't know if my memories would help.

wakeup - you have a good point in the therapy line. Shows he must have a lot of aggression, living with me...

Buy him one for Christmas! :)

Ak - a breadmaker? I wouldn't dare! Male Pride would be severly dented!!

Making bread is one of my very favorite things and I don't use a breadmaker either.

I like the idea of eating the whole thing, but around here bread doesn't last long anyway!