The End of a Love Affair 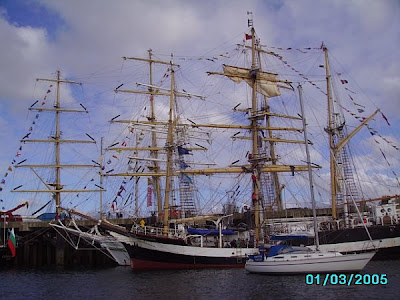 On Saturday Falmouth had the Parade of Sail for the Tall Ships that have been moored up in the harbour since Wednesday.

We took a grockle boat out to see them though unfortunately couldn’t go ashore and peek at them as they were preparing to set sail later. We had an entertaining Guided Talk by the owner of the boat who told us that the hideous green house over at Flushing opposite is Piers Brosnan – can’t say much for his taste in houses. We did look out for him but expect he was viewing the Tall Ships from the deck of a gin palace somewhere. Himself has decided to write to Piers to tell him what he thinks of the colour of his house….

After that we wandered through town which had a fabulous atmosphere – very holidayish and happy – and had an Italian ice cream from the parlour bit of the new(ish) Pizza Express down by the maritime museum. We were down there so that Himself could have a look at more boats, including two racing boats. Later on we wandered back to Gas Works car park which had been cleared so that a huge marquee of Cornish produce was on offer plus loads of different eateries. We were able to watch the Tall Ships leave the harbour and head out into the bay for the Parade of Sail and it was a very moving spectacle.

At the end of it all, Himself said, “you know Pop, going out on the water this morning made me realise how much I miss it.”

My heart fell. I had a certain sense of déjà vu.

“There’s nothing for it. We’re going to have to get a boat of some kind. I think I should be able to pick up a hull for next to nothing and customise it.” He gave a guilty grin and said, “You see, Pop, I do miss them so much.”

“I know,” I said. “Boats are in your blood.” Meaning – he’s fallen in love with boats again. I thought how pleased I’d been when he was keen on jazz again. (A significantly cheaper hobby than boats.) His love affair with jazz has abated now as he’s too much of a perfectionist and isn’t able to play as well as he thinks he should. So he’s discouraged and has fallen in love with boats again.

I looked at him and smiled to myself. Some things never change. I can see from now on he'll be scouring the boatyards for an old wreck which he will get for nothing and do up. I wonder what sort of boat we’ll end up with next year?
Posted by Flowerpot at 10:57

I remember seeing a tall ships race somewhere - I think it was Hamburg. They are most impressive. Sounds a lovely day.

The ships on your photo look stunning. Not that I'd go on one but they do look very grand.

Hope Himself manages to find the boat his wants - do you sail?

jj - they are the most wonderful ships they really are - so romantic looking! I wish I'd been able to go aboard and have a snoop!

crystal - they are stunning indeed. Himself wont get the boat he wants because of funds! But I'm sure he'll get something. Just a question of what... as for me, well I do sail in a sort of-one-foot-on-land fashion.

Lindsay - you're right, though Himself is good at acquiring very cheap boats. No option really!

Oh it all sounds so lovely!

Ak - yes Himself has nearly always had a boat but we havent had one for the past few years. He's aiming to buy a hull for a few quid and do it up. Customise it. We'll see....

I look forward to hearing about the progress:-)

Oh dear what is to become of you two. They went to sea in a beautiful pea green boat. My ex brother in law who used to live in Treen Tug being his nick name. He loved the sailing, sailed around the world with his family. Surrounded by all that sea, you are a lost cause. I bid you farewell as you disappear over the horizon. Maybe a little more encouragement on the cornet will keep him landlocked.
Cheers Mark x

lane - well he's got the van to work on which is one project and he's also working for a friend of ours so that's another! But boats are in his blood, and blood will out....

I think once boats are in your blood, they stay there forever. We were only looking around a boatyard in Norfolk the other week...tempting! :-)

I have never seen a tall ship race, but would really love to one day. I hope Himself manages to find a lovely boat of his dreams.

Annie - you're so right. Boats are certainly in Himself's blood - not mine I hasten to add!

Crystal - you poor thing. So do I!

ellee - they are so beautiful - incredibly romantic. Probably not when you're on board but they are to watch from afar!

grump - many apologies for having missed you out. This week is a little hectic and brain not working as it might! Personally I'd keep him chained to the cornet but alas it is not to be. A pea green boat here it is - and I feel seasick just thinking about it!!

Grockle? I thought that was Devon, and the Cornish was 'emmet'?