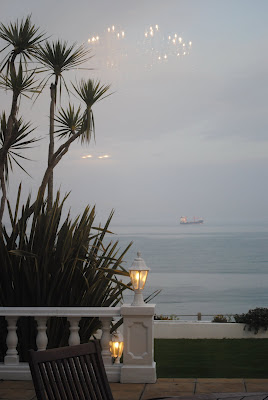 Last week I was fortunate enough to be offered a restaurant review at the Duchy Hotel in Falmouth which turned out to be the most memorable meal of my life. The chef, John Matovic, is an incredibly talented man who we met later, and each dish was a genius mix of textures, colours, flavours and tastes, each presented as a work of art. The wine was amazing too – and above is a picture looking out on the terrace as it got dark. If ever you get the chance to go and eat there – go. You won’t regret it.

Well, that was the fun part of last week. After that, I went up to see mum for the weekend which involved a lot of driving. She is a little better but has a long way to go, but at least I took her out to buy some shoes to give her more support and try and encourage her to get out a bit. But it was a hard weekend emotionally, and I didn’t sleep well.

There are several things on my mind right now, one of which is my eyes. My godmother left me enough money to have laser surgery on my eyes (I am incredibly short sighted) so last week I went to have an assessment. The outcome is that laser surgery isn’t suitable for people over 50 but lens replacement surgery (similar to cataract removal) is. Apparently I would have much better vision, not need glasses and would also not have cataracts in the future. The downside is that it’s twice the price of laser surgery.

I talked this over with my mate who gave me a lift, sent out various emails and researched online, though there’s not much information on the web. So I thought I’d go for it. I rang the surgeon (who is very well regarded in Cornwall) and he gave me two possible dates for surgery, in May and early June (they do each eye 2 weeks apart).

Then I had a phone call from a friend’s mother who has had it done though not by Mr Kumar. She had a lot of complications, then had to have laser surgery (why?) and now still has to wear glasses. One of my brothers rang to say he’d met someone else who’d had it done but still has to wear glasses. By this time I was panicking. No point in spending all that money to still need lenses. Might as well stay as I am.

So I rang Mr Kumar on Monday (he gives all patients his mobile number) and explained my concerns. “Of course,” he said. “Take as much time as you want to think about it.” And he’s going to get some of his patients to ring me and tell me their experiences.

So – any of you know anything about this? I trust Mr Kumar but it’s a hell of a lot of money and I only have one lot of eyes. Any feedback most welcome.

To soothe myself tonight I shall settle down and watch one of my favourite films – As Good As It Gets. Such a clever script and amazing acting. It always makes me laugh.

Recent developments – watch out for another blog on Friday…..

Well, life certainly continues to be a roller coast for you. Sue M's had the surgery you're contemplating and is very pleased with the result. I don't know how short-sighted she was in the first place. I'm up in the high minus numbers and would love to see unaided so I know that laser surgery would be tricky (and in any case Best Friend is an Optom who wouldn't have laser treatment)but the cataract surgery sounds promising. I hope you get the answers to make your decision easier. Cx

The view from that restaurant is amazing!

Don't know anything about the eye op, it's a big step so take your time deciding. x

My Mum, Gran and Husband's Gran have all had this operation, all due to cataracts. My Mum and Gran had no complications and didn't need glasses afterwards. My 60 year old Mum had worn glasses her whole life, quite a shock to lose them!

My Husband's Gran had this done last year at the age of 93, and did need the laser on one of her eyes afterwards. The membrane around the lens can thicken and cloud the new lens. The laser makes a whole in this membrane so that the lens is getting light. She was told this was a risk, mainly due to her age. I think it's also much more common when there are cataracts, which you don't have. She was on the nhs so the laser was just an annoyance rather than a financial cost. I assume you'd have to pay more for any laser you could require? If not I guess it's not such a worry, she said it only took seconds and wasn't uncomfortable.

All 3 of them said the operation was very quick, about 10 minutes, and just felt like a very wet eye. Not at all painful and they were all delighted with the results. This is now a really common operation. I hope that helps!

Chris - good to hear that Sue M's pleased with the result. That's encouraging. Will wait and see who else has feedback....

Ak - amazing view isnt it? Yes I will take my time deciding - it's a hell of alot of money as well as being somewhat attached to my eyes, even if I can't see much out of them right now!

Denise - that's really helpful thanks so much. And cheering! Good to hear from you, too.

I can't comment specifically on the laser surgery, but one of my close friends had a cataract operation under general anaesthetic in January and it did not go at all well. Apparantly, when she came to, she was in a lot of pain and eventually it transpired that the surgeons had somehow badly scratched the cornea and she now has the permanent feeling of grit in her eye, all these months later. The hospital are still keeping an eye on her (pardon the pun) and she may have to have further surgery to attempt to correct the damage. Yet the general consensus is that cataract ops are safe and routine. Research carefully and listen to what other patients say. At the end of the day, will the op improve or make things worse or would it be best just to leave things as they are?

Hi Addy and thanks for your thoughts. Hate to think of having my eye scratched though this surgeon is very well thought of in the eye business so to speak. The op should make things much better so I dont need glasses but no point in having it if it would make things worse or no better. Will do more research.

You see adverts on tv for laser eye surgery and they always make it look so incredibly easy. But I think the reality would always bring complications, and like you say, what's the point in spending all that money if you're still going to need glasses anyway?!

I love the view from the restaurant. My mom-in-law had the op but still wears glasses. I would also discern it very carefully. Enjoyed your post. Look forward to the next one.

CJ - Laser surgery is very common now, what I'm looking into is lens replacement which is a different matter. Shoudnt need to wear glasses with that but need to research more. Thanks anyway CJ!

Don - good to meet you, abeit belatedly by the sound of things! Yes it's a lovely picture from the restaurant isn't it? (I didnt take it so can safely say that!) Thanks for the info about your MIL and please come back adn read more posts!