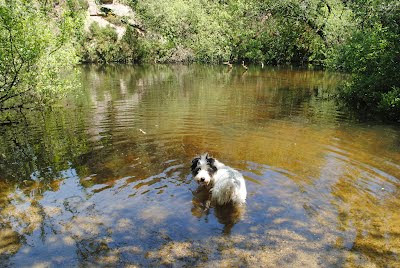 The other weekend I was driving to Truro with a friend who spotted a spider crouched in the corner of the van. “Look!” he cried as it scuttled underneath one of the visors. “It’s massive!” As he’d just been bitten by a similar creature a week ago, and his arm had swollen up, I glanced nervously up – and nearly crashed the van. This spider was indeed huge, with black hairy legs and, I could swear, big white fangs. No, I lie, they weren’t white. But I’m sure they were there.

Progress was not helped by the spider running full tilt across the roof of the van. I screamed. My mate gave a running commentary on the spider’s progress which made me scream even more. Finally I pulled into a layby and leapt out of the van, shaking, while my friend flipped the spider into a carrier bag full of CDs and then out of the window (I hoped). Gingerly we returned to the van, peered this way and that, asked Moll if the spider had gone. She said yes (or something similar), so we got back in, my mate laughing uproariously. “I’ve never seen anyone scream like you did,” he cried. “I’d pay to see that.” Bastard. Never fear, he will get his comeuppance.

Anyway, that was about 6 weeks ago and since then I’ve driven several hundred miles without thinking about it. Then a few weeks ago I was driving into Falmouth when the sun came out so I pulled down the visor on the driver’s side – and out scuttled Mr Spider. Pure adrenaline rushed through my veins and I screamed. It jumped onto my lap, then onto my legs and onto the floor. By this time my heart was pounding so loudly I thought it might jump out and I swerved, luckily not hitting anyone, stopped, in the middle of the high street and jumped out. I heaved the mat from under the pedals and the spider scuttled round in circles. I tried to flick it out with an envelope, and it retreated up under the steering column.

By this time a queue of cars had formed but I was not getting back into that van – and then a kindly fellow checked the van over for me, told me it had probably gone up behind the steering wheel, as I feared. There was nothing for it but to get in that van and carry on.

I walked Moll, laughing (albeit somewhat hysterically), knowing what my friend would say had he been there. And then I called in to see my brother in law who listened to my tale, a gentle smile growing as his blue eyes twinkled. “You could get some insect spray,” he said eventually. “But be careful.” And the smile fell off his face. “You mustn’t get distracted by spiders. You might have an accident.”

And he’s right. If that had happened driving up to Devon I’m sure I would have crashed the van. So I bought some insect spray on the way home, squirted it up the steering column (hoping to god this doesn’t muck up the electrics) and waited to see if there was a dead spider in the morning.

There wasn’t. Worse still, when I told my friend he looked at me. “I wonder what it’s eating?” he said, eyes gleaming. “It’s probably huge by now.” I thought of the supply of biscuits I keep in the glove compartment to ward off low blood sugar levels. I thought of that spider, magnified several times over. And I thought of my next trip to Devon, this weekend.

The van’s booked in for a thorough clean today. I’m not risking another meeting with Mr Spider half way up the motorway…

Wah! That made my blood run cold - I don't like driving at the best of time and the thought of having a giant spider as a co-pilot makes me shiver!

I never used to like driving, Chris, but having had to do it has made a big difference and i almost enjoy it. Not with a spider as passenger though!

That gave me the shivers too and I'm not usually bothered by the creatures. In fact, I found a big one in the garden today and took a photo for my blog because he really was kind of beautiful! But then of course, he wasn't in the car with me! That would have been a very different story!
Glad you are safe and that your van will be thoroughly cleaned out before your next long drive,
love,
xx

Sally - I'm much better about spiders than I used to be but this one was particlarly large and hairy! Van is v shiny now though will probably be covered in squashed flies by the time I get up to Devon....!

Sorry I know I shouldn't laugh but you painted quite a funny picture!


I'm not afraid of spiders but a H.U.G.E. one crawled out of the washing I had just brought in off the line the other day and I jumped out of my skin. When I saw H.U.G.E. I mean I thought it could have been a mouse! Now mice I'm scared to death of. :0

When I was nursing, I was driving home with the window open on a hot summers day when a bumble bee flew in and bounced on the seat then up my dress right next to my crotch where it righted itself before beginning to investigate where it had landed. Slamming on the brakes I got out the car in a most undignified way, legs wide open. Then I had to stand by the side of the road in full view whilst I rummaged up my dress to get it out. A chap had stopped to help thinking I had broken down but bless his heart, he waved the traffic by trying to shield me as much as he could.

I kid you not!

datacreata - you couldn't make that up could you?! I'm laughing over that - it's like a sketchon TV!!!!

Ak - as big as a mouse? Blimey - running for cover!

Some truly horrific tales here, Flowerpot. Your spider encounters are the stuff that nightmares are made of.

Last September’s holiday in Marazion co-incided with an invasion of the horrible creatures. The infestation was mentioned several times on Radio Cornwall, so it wasn’t just me. The great, black, hairy-legged abominations were everywhere (I know…but I really don’t like spiders)

The rooms in our holiday home were like minefields. Spiders everywhere. They squeezed themselves down the edges of carpets, lying in wait to race out and terrify me every time I passed.

Our home is ring-fenced with spider repellents. We have plug-ins that send out ultrasonic beams and another device that works through the house wiring, emitting high pitched sound waves too high for humans and pets to hear.

I’m assured this doesn’t harm the spiders, just persuades them to move elsewhere. I really don’t like spiders, but I don’t hate them enough to want to kill them.

Rena that sounds HORRIBLE. I want to run, just thinking about that! You poor things.

I'm not bothered by spiders but I am proper scared of wasps. I have never been stung by a wasp (or a bee), and I run a mile if there's a wasp around. I'm glad you are getting the van cleaned and Mr Spider will not be accompanying you to Devon.

Annie - I don't like wasps either. The van now looks sparkly so I only hope Mr Spider was removed in the process!