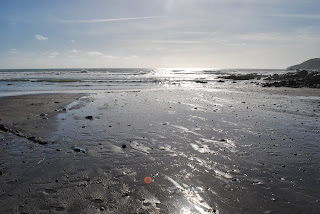 Note to self. Do not attempt to say goodbye to one relationship, start another and prepare for major surgery all at once.

So much has happened in the past week - since I wrote that last post - that I hardly know where to begin. But to cut a long story short, regular readers of this blog may have noticed that Mr B has been away for a long while, and during his absence, life has been extremely tough. Several weeks ago I met the lone sailor. Just over two weeks ago we had lunch. We'd only seen each other a few times when I realised that this had a chance of going somewhere, so I told Mr B.

Breakups are always so very hard, particularly when you really care about each other. But our parting was as amicable as is possible in the circumstances, and we hope to remain the true friends that we are, once the dust has settled.

So while I have been grappling with the raw grief associated with saying goodbye, I have also been dealing with the uncertain wonder that comes with getting to know the new man in my life. And, of course, preparing for hospital.

I’m always being told off for doing things too quickly, but recent events have broken all my previous records. Both of us are walking round, stunned and astonished. By last Saturday I felt so overwhelmed by everything I had a complete meltdown, so apologies to anyone who I may have upset by weeping and wailing by phone or email.

A few days on and I feel much better about life. Yes, my stress levels are pretty high, which is understandable, but they aren’t through the roof, as they were a few days ago, and while there is a huge amount of emotional stuff to process, at least the three major events sort of balance each other in a way, and stop me worrying about hospital too much. There’s so much to think about I can’t possibly do so - the only way is to take small chunks of each at a time.

But in all this, the Lone Sailor has been unfailing kind and patient. After all, he has to process this stuff as well. He is currently repairing my second puncture in two days, and preparing for my last appointment with the specialist tomorrow when we may know more (a terrifying prospect).

He is calm under pressure, though, and departed yesterday with two of my hospital leaflets, entitled “Your Hysterectomy” and “Pelvic Floor Exercises,” - both of which he threatened to read in the pub.

The other day, he asked, “Do you believe in fate?” I said I thought things happened for a reason, if that’s what he meant.

“I think I’ve come into your life to help you through this,” he said. “I’d like to do that, and let’s see where we go from there.”

I am stunned at such generosity. No one could possibly ask for better than that. So while life continues to be a roller coaster - as ever - just think: my convalescence couldn’t be coming at a better time. I can use it, not only to recover, but to process the massive changes in my life.

And for now, the lone sailor is not alone any more.

Wishing you a fair wind for your new adventures, Sue. What a lovely, lovely remark from your new man).

Break up's are never easy and like you say, especially so when facing other things. I hope the lone sailor will stay around and that Mr. B. will recover.

There's a reason and a season for everything in life. Enjoy your new season Sue.

What a wonderful man Sue, keep hold of him, sounds just the sort of guy to suit you.
When I was in hospital, awaiting the dreaded hysterectomy, Ian, my husband of about 4years (second marriage), marched purposefully into my room with a large map of America which he spread across the bed, pointed to Florida and said 'would you like to go there when you've recovered from your 'op'..... I was flabbergasted....what a brilliant idea....completely took my mind of the operation and we started planning our holiday. Shortly, the anesthetist gave me a pre med jab and I drifted off to sleep dreaming of white surf crashing onto the the white sands of Anna Maria Island, just off the coast of Sarastota, Florida...you see FP dreams do come true! I'd always dreamed of going to Florida and so we did 3 months later!
Good luck,
Di,xx

Thanks Trubes - and I love the idea of your husband's holiday plans. Brilliant!

Kim - there is indeed, how true x

DC - I hope so too on both counts x

Chris - thanks so much!

Oh, Sue, that made me weep. What a special man your not so lone sailor is! Many, many years ago, when I told my Mum and Dad that I had fallen in love with Mr S, my Mum only asked, 'Is he kind? Does he make you laugh?'

I send you much love, will see you next week at singing and would like to know if there are any food stuffs that you don't like!

He certainly does sound like a 'keeper'. How lovely to have someone so special there for you at this time. Wishing you well :-)

Your lone sailor sounds like a great guy, Sue, although it must have been tough having that conversation with Mr B. It's great that you will remain good friends. Hope all goes well for you at the hospital appointment. Rena xx

Rena - yes he is fabulous and yes it was awful telling Mr B. Life is never simple is it? x

Sally - your mum was right. And he fits both those categories... though Mr B and Pip did too.

Hi Flowerpot, just dropped by to see how you're doing, hope you're managing to keep cheerful, although I know you have a lot to think about, have you got a hospital date yet, I can't remember, without scrolling through your stuff, and as I've got myself back 'abloggin' time just runs away ...
Take care,
love di..xx

Trubes - op date is friday 7th march not long to go now. My friends and the lone sailor are keeping me as cheerful as possible! x

Just think then on Sunday the 9th march it will all be over and you will have come around properly from the operation, and can start planning for a fun packed summer..Voila,

Di - yes that sounds brilliant. I am already looking forward to sailing with my Lone Sailor and taking Moll and friends out for picnics!