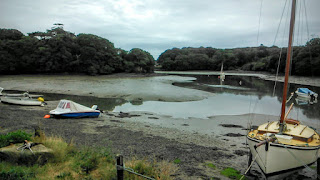 Yesterday we finally got to have a sail in our friend Al’s lovely Dragon called Snap. I say “we” because while Al and C have been racing, it’s not been so easy for me to get out with work commitments and having to find a dog sitter.

But finally we fixed on yesterday for a sail. Weather forecast was rain in the morning, clearing by the afternoon and possible sun. Sarah was booked to come and walk Moll and all was well.

C was staying on the Lizard with friends but drove back and we got the water taxi out to meet Al on the boat. Contrary to expectations, as we headed out towards Black Rock, storm clouds gathered, the sky grew blacker until it was almost like night time, but with an eerie band of light hovering over the horizon.

We could see rain over the Lizard, and at this point Al suggested putting up the spinnaker. Of course, no sooner was it up than the first of the rain arrived. And we’re not talking normal rain, this was Monsoon rain that soaked us in seconds. Al thrust the sail cover at us, and we crawled underneath that, then under the fore cabin while the thunder growled around us, forks of lightning lit up the darkened sky, and the boat rocked in the turbulent sea.

Finally it stopped (we were laughing as it was so utterly ridiculous) and we made it back to Mylor - and a lovely sail back, during which we dried out bits of us.

As C had to get back to the Lizard, we went for something to eat in Falmouth early, and on the way back, as we got near his place, the heavens opened yet again. I’ve never seen rain like it - except on films. It was as if the sky had opened and out poured a year’s worth of liquid misery in minutes.

He jumped into his car while I ran home, and stood in the kitchen looking at the water swirling round the drain in my yard, perilously close to the kitchen door. However, it went down, and I sighed a sigh of relief.

Until I went into the kitchen later and found the carpet soaked. Absolutely dripping. And heavy carpet is very heavy. Thankfully my dear mates Mel and Joe who live upstairs came and helped. We had to move all the furniture, rip up the carpet and put the dehumidifier on.

12 hours on the carpet’s still soaking but at least the sun’s out, and we hope the worst is over. I just hope that Himself is OK - there’s no signal where he’s staying so I haven’t heard from him yet…..

I'd heard you had heavy rain your way yesterday, whereas we sweltered in the 30s here in wall-to-wall blue skies. So sorry about your carpet. I'm guessing the rain came in from under the door. Hope you get it dried soon.

The weather was incredible yesterday, wasn't it Addy? There you were sweltering and I'm still wringing water from the carpet!

Glad you made it home safely, BUT...not to the wet carpet, etc. So sorry. Miserable to deal with I am sure. We have surprise downpours like that here in Oregon and I live on the bank of a river, so always aware. What a mess for you I am sure. Not fun. Hang in there !!!

Annie - I've never had a flood here and we've been here for 15 years - we live on a hill so it usually sweeps down the hill but not this time! Horrible mustiness with still wet carpets still at least it's not raining!