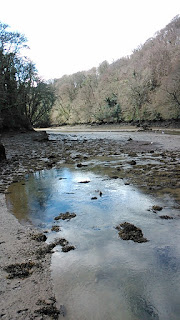 At last I'm able to get back to writing the next book - Daphne du Maurier walks.

So on Sunday Fiona and I headed up to Fowey, in amazing weather, to do a walk round Lanteglos Church which was where Daphne married Tommy Browning. It was also where Jane Slade married Christopher Slade, and both were buried there: Janet became the inspiration for Du Maurier's first book, The Loving Spirit.

There's something special about spring, I think, as it carries a reward for the dour winter months, and hope for the summer ahead, and never more was it so than on Sunday. The scent of joy was in the air, along with shy primroses, deep blue violets clumped next to wild chives. Celandines lit our way along much of the path and overhead the bird song was the sweetest sound ever.

The church at Lanteglos is up a steep path from Pont Quay, but worth the view, and when we got there the churchyard was kissed with blackthorn blossom. From inside the church came the sound of a piano playing - the vicar, somewhat embarrassed at having been caught, said he wasn't supposed to have been playing (why not??) but was waiting for Bishop Chris from St Germans who is walking the Celtic Way - a variety of Celtic paths spanning some 135 miles from St Germans to St Michael's Mount. The Bishop was due any minute, but we didn't see him, and instead wound our way back towards Bodinnick where we sat in the sun and enjoyed the spectacular views down the river towards Fowey. 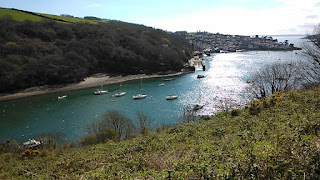 We really didn't want the day to end, it was such a joy to experience. And how lucky am I that I get to write about it, later? Transcribing the tape was lovely, listening to the robins and blackbirds singing their heads off, on what was a really perfect spring day.

Its a shame the books can't also have an audio element to them (maybe in the back), where the reader could listen to said birds, the wind, rain, animals in the field etc. Would really add an extra dimension to the walk. Maybe too expensive in general but could be offered at a small extra if anyone buys direct from you?

That's a really good idea, I will mention it to my publishers - many thanks!

Lovely post Sue, you are so fortunate to live and write
in such a lovely part of the UK. I haven't been to Cornwall
for about 30 years so it's really time to pay a visit.
My sister,s and her husband's ashes are buried in The garden
of Remembrance at St Just Parish Church.
Hope you're keeping well.
love,
Di xx.

St Just is a beautiful place, Di - and I hope that if you do come here, you get in touch so we can meet up! Love Sue X

Lovely Photo's as usual. It looks so tranquil.