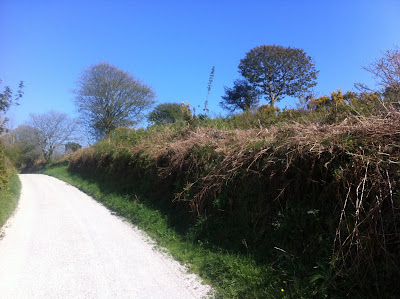 Last weekend, Cornwall, like everywhere else in the UK, was drenched in the most wonderful, out of season sunshine. And it was fantastic. I have been bemoaning the lack of any holidays this year but I really felt as if I was on holiday, and just soaked up the heat which was much needed. We also did some amazing exploring - three or four new walks around the Constantine area, which were all magical. It was lovely to get away from the crowds, go off piste and explore inland Cornwall, so the weekend found us walking over fields on untrodden paths, following the OS map with more or less success. By which I mean we got lost but not often...

But I digress. What I wanted to talk about was making time. We all have busy lives, but by the end of last year I felt jaded. Journalism was proving increasingly difficult, and I felt something was lacking in my life. I've written five walks books and needed a breather, to do something different. But what? And then I was talking to another journalist friend, Glynis Kozma, who said, "I really miss writing fiction." And that was it. OF COURSE!! But not having written any fiction for ten years, I felt rusty. And my confidence was on the floor. So she suggested doing a course.

I did a lot of research and finally found a novel writing course with the London School of Journalism which provides 14 assignments which can be done over up to 18 months, and the tutors are selected according to what type of novel you want to write. Having done an LSJ course 10 years ago (though on journalism) I knew them to be good value and so I told my publishers I wanted a year off writing walks books, and signed up with the LSJ Novel course.

And it has been - and still is - brilliant. The only people that know anything in detail about it are my tutor and Mr B, with whom I have had endless plotting sessions over breakfast in Wethers. (I should qualify, I haven't had any brekkies with my publishers - they're in Wales.) I don't want to talk much about it for it's too precious, too vulnerable. A flickering candle flame that I need to nurture.

Another digression - at the beginning of this year, I had two offers of work - one for an architect in Falmouth, and one for several commissions from an editor I know well. I was so excited, thinking, what a brilliant start to the year. And then they both fell through. To Say I was deeply disappointed is putting it mildly. But I buried myself in beginning this course, thanking god I had the distraction.

And then about a month later I showed someone the flyer I had written advertising my professional services and he said, "I need a researcher," and it has gone from there. Really interesting work that fits in with everything else I do and I'm really enjoying. And he pays promptly which, as most self employed people know, is a massive bonus.

I started off saying that I am writing this book purely for me. Which of course I am. But as it goes on (65,000 words so far), I am getting increasingly keen on not only finishing it and doing the endless editing necessary, but sending it out into the big wide world. I am in love again, with that magical art of weaving stories from a tangled brain onto paper - or in my case, a computer screen. So far...

And in a way, that's all I need. Knowing how much hard work is involved in promoting and selling books, I am daunted by the idea of actually getting this published. It would be terrifying and exhilarating at the same time. But books expose you, leave you incredibly vulnerable for people to criticise your creations - and our characters do become part of us. However, if I were to get an agent, and a publisher - well, you can imagine how I'd feel...

So sometimes we have to make space in our lives for something to happen. It might not happen when we want it to, but sometimes it does. And very often not when we expect it. Which makes it all the more wonderful.

But for the moment I am continuing to love the journey of putting words down, creating people that live and breathe and react and fall in love and are cruel and do wicked things. And of course I am most in love with Boris. The dog.

And last week, as we were going round Rosudgeon car boot sale, I suddenly thought - I have an idea for the next book. And I had such a thrill, it lit up my day. 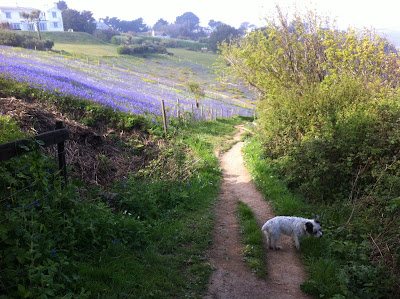 Oh Flowerpot, it's wonderful to hear you have been rejuvenated and are in love with writing again. And inspired to write a new novel. Doesn't a bit of warmth and sunshine bring hope and lift the spirits? Here's to a summer of country walks and ice creams by the seaside. Av x

Congratulations, Sue. That's wonderful news and there's a real lift in your blogging voice too. Wishing you every success with the novels. x

Chris - Thank you so much and looking forward to reading your running book! We all need a break in what we're doing don't we? X