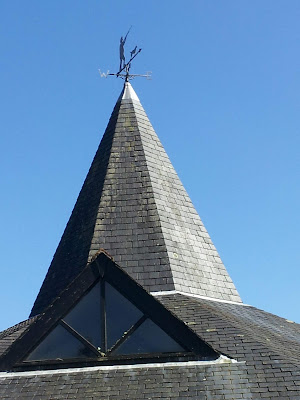 Anyone got any ideas where this tower is?

I've had problems with technology recently. The shower in the top flat is being fixed, and dear Joe has fixed the hole in their kitchen ceiling, but the next day my phone, kindly donated by a friend, died. As in - just wouldn't work. Two days followed of running round Falmouth phone shops and then Andrew, who I'm doing some research for, kindly gave me an old one of his to tide me over. It took several hours of running back to the phone shop in Falmouth where a lovely fellow called Jon got the phone started, and then I took over, sweating over the phone and googling How To.... to get it going, but it is, after a fashion. By which I mean I can make calls and texts but anything else requires upgrading of the phone to some new technology - at which point I wore, very loudly, and gave up.

Then I tried to watch a DVD the other night and it got stuck, with the result that I can't get it out. Mr B has spent several hours trying to get the thing out, but the DVD channel doesn't now work at all so he's just loaded it into the van to take to the TV repair shop in Penryn.

As that's sort of three things, I'm just hoping that nothing else goes wrong too soon.... But now the sun is out, I've spent the morning working on my novel, and I'm just over half way. And car boot season has started, so hopefully we'll get rid of some stuff and make some money at the same time.

And in the spirit of spring, we decided to take advantage of the Scilly Locals Special, and have a day break over there - in May, when it's a tad warmer.... 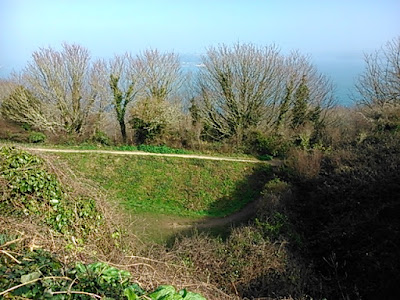 It’s weird isn’t it how things seem to come in threes. How lovely to be able to pop over to Scilly Isles.

And a happy Spring to you too Flowerpot, what a divine photo of the trees just coming into bud. Technology is sometimes a bit baffling isn't it, it's not my thing either so I sympathise with you. The Isles of Scilly in May will be delightful, what a treat!

Hi Sue! Haven't stopped by your blog in awhile. I moved mine from where it was (grosvenorsquare.blogspot.com) over to Wordpress (melissaamateis.wordpress.com) but it's more of a website than a blog now. I tend to hang out on Twitter a lot and just followed you there. (In case my name isn't familiar, it used to be Melissa Marsh but I got divorced and changed it back to my maiden name of Melissa Amateis). Glad to see that you're doing well!

I hate it when things go wrong, particularly technical things. I consider myself to be a modern woman and can cope with most things on my own, but computers and phones usually have me scratching my head. At least you have a nice holiday to look forward to. You'll have to post pictures. I've never been to the Scilly Isles.

DC - lovely to hear from you! And Av - so glad you persevered - it was my fault Ihave to go into Comments Moderation every time which is a nuisance!

Hi Melissa, sorry to hear about your change in status but hope you are happier now and life is treating you well. Will see you on Twitter!

Addy - oh, me too! Scilly Isles are lovely though I think we will probably go in June now...