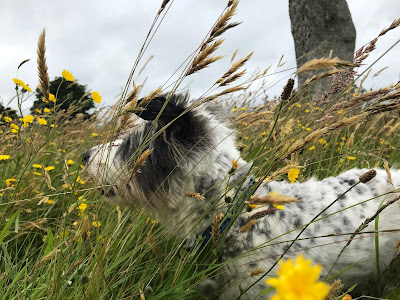 Here is my great enabler, who is 15 this week. Well, it's sometime around now - as she was brought over in her litter from Ireland, and we never saw the parents, she could be any age or indeed any type of dog, but that's not what matters. (To digress a moment, remember when dogs were just - dogs? Mongrels, like Moll. Nowadays perhaps the term 'mongrel' is non-PC. Dogs have to be labradoodles or cockapoos or whatever. Why not just dogs? End of murmur.)

Anyway, it's incredible to think that Moll arrived in our lives 15 years ago, when Pip was suffering from really bad depression, which is why I thought a dog might help him. It did. Shortly after that he was diagnosed with prostate cancer, and then pulmonary fibrosis. The other stuff came later. So any dog lovers will appreciate that there timing was impeccable. Without her we would have sunk.

I can remember when Pip's diagnosis came through and he didn't want to talk to anyone. Not that he was chatty about personal stuff anyway, but our world shrank to the three of us, with me shielding phone calls. Moll was our black and white spotted bundle of joy who kept us going. And still keeps me going today and every day for as long as she is here.

The other great enabler, as I was reminded by Patrick Gale during an online session yesterday, is death. I would also add that of course other massive life changes such as separation, divorce, illness etc can also be great enablers. Sorry, this isn't meant to be a depressing post but death really can be an enabler, as well as being utterly devastating.

Many people feel stuck in their lives, bound to partners or parents or people they feel they can't leave. They tread water, wading through treacle-like limbo, hoping guiltily that the time will come when the people they care about (or may not care about, which makes it even harder) will be taken from this life, freed from their pain and leave the carer free.

If things are really intolerable, some people find the courage to leave notwithstanding and who can blame them?
Being a carer must be one of the hardest things imaginable. I only had several months of it when Pip was very poorly, latterly, and I wondered how the hell people carry on. The simple answer is that you just do because there's no option.

But when death comes, alongside the gut wrenching, sleepless, gnawing grief, there can be a gradual relief. That the one you love is free, and that means you are too. The Berlin Walls surrounding you crack and crumble, brick by brick. You see glimpses of life outside - a "normal" life, whatever that is. You tiptoe and look outside furtively, expecting a brick to land on your head. A few might land on your feet, but you scrabble at them to create a hole big enough to crawl through. And gradually you wriggle through the debris, and stand up, glancing at the sky, the buildings, the people, the sea, the boats and the dogs, the cats and the spiders, the birds singing their hearts out.

And you realise that there is another life out there. You just need the courage to live it.
So here's to my Great Enabler. Happy birthday Mollie Dog. The picture below is one of Terence Coventry's superb sculptures in his Sculpture Park at Coverack. Do go. It's wonderful. 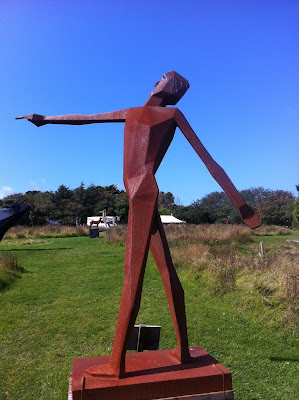 Happy Birthday gorgeous girl♥♥ I love your posts Sue, you write from your heart♥ I hope you are keeping well xx

Thanks Manchester Lass - I'm ok and hope you are too XX