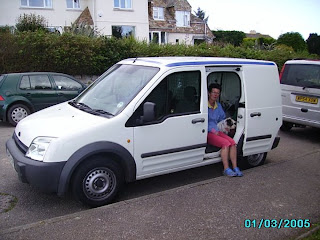 Here you have me and Moll perched inside The White Van. Posing rather uncertainly, in my case, because I hate having my picture taken (which is why it's a small picture). Mollie isn't at all abashed - she loves the camera, knowing smugly that she always comes out looking winning.

Having had a wonderful weekend of glorious sunshine - which is the first and last of the year apparently - it is now officially autumn.

So we have decided, as we are going away in the van next week (well, Himself is going to sleep in it for a few nights while Mollie and I are not) that the time has come to christen it.

Flowerpotmobile was mooted but is just too long.
Doxie Three is the current name but that seems unimaginative.
Himself suggested Krow as the first two letters are KR but I thought that had sinister connotations. The last three letters are AVP in case that gives anyone any bright ideas.

So over to you lot.

Oh, and while I've got you thinking - I'm trying to think of a title for an article about walking with Mollie. The scrapes she gets into, friends met along the way, all that kind of thing. The only one that springs to mind is The bitch Is Back by Elton John which isn't desperately complimentary.
Any ideas?
Posted by Flowerpot at 08:46

When my friend and I were 18, we both had Morris Minors. It was at a time when it was 'trendy' to have old MMs - mine cost £150! I called mine Betsy and she called hers Flossie. And we both had our cars names across our window screens. Those were the days!
Ooooh, I'm thinking so hard for a good name for your van - something sunny and bright me thinks!

What about a flowerpot (with a flower in) drawing and mobile in lettering?

Long ago there lived a beautiful aboriginal maiden named Krubi. She made for herself a cloak of the red skin of the rock wallaby, and she ornamented it with the redder crests of the gang-gang cockatoo. It was said to be the only cloak of its kind in the world.

Krubi was in love with a man called Bahmai. Whenever he went off to hunt, Krubi would clamber to the top of the mountain, settle between two sandstone rocks, and wait for his return. But one night Krubi's heart was saddened. She heard the yells of battle. Then in the afternoon she saw her scattered tribe of fighting men returning. Bahmai – her true love – was not with them.

Krubi stayed for seven days waiting, and her tears formed a little rivulet. And there on the the sandstone ridge, when she knew that Bahmai had been killed, she willed herself to die. She passed into the little tract of weathered sandstone, and then suddenly, up came the most beautiful flower. The stalk was firm and straight, and without a blemish, just like the man Krubi died for. The leaves were serrated and had points just like his spear. And the flower was red, redder and more glowing than any other.

The black man called the flower "waratah" because it is most beautiful.

The leaves remind us of Bahmai's spear. And the flaming red flowers are the symbol of the love of Krubi and Bahmai.

So, Flowerpot…I think you should call your little van Krubi. x

Sorry - cannot resist it - KRAP - not meaning the van itself - it looks good.

Annie - I do like Flossie but dont think its right for ours somehow!

Pat - well that's very tempting. Might not do him much good when he's workking though - lower the street cred!!

What about Kilroy (as in Kilroy was here but is that too American?) Kristopher? Kraken? Krusty?

Flowerpot, it's so lovely to see you. Are those Crocs you are wearing?

oh elaine what a lovely story. I'm gulping now. A great name. I will put that in the box!

Pat - Krap is what Himself would call it I know! Though in fact he;s very proud of it so perhaps not!!

wakeup - I worked with Kilroy once. He's actually very small but with incredibly blue eyes. Wouldn't name a van after him but I like Krusty...

ellee - yes those are my trusty crocs. very useful for Cornish weather! Not good for dogwalking on these dewy mornings though!

And for the article

The adventures of Molly and other tales?

Here are some names for the van.
Potmobile
Potty
Sandra
WTFAW Pronounced Whatfour. Stands for where the fuck are we.
Gone fishing.
For the dog stories.
Bitch
Dogs Iview
Moll's diary
Diary of Bitch
Go take a walk [Bitch]
Molly's Tales

Now you can eliminate all of the above you might come up with one your self.
Woof x

Ak - great van idea! And that's a good one for the article as well..

Grump - I particularly like WTFAW!!!! Love to Tilly - Moll is Not Herself this morning - wouldn't go for a walk which is unheard of. We are keeping a close eye on her and hoping for the best. It's not a tummy bug so fingers crossed.

I'm really rubbish at names, titles etc. Bit of a handicap from a would-be novelist. I did have one idea... but it was the same as Lindsay's. Just as well other people are more creative in this department!

Zinnia - I have to say, KRAP sounds the best so far!

Perhaps something with potty in it - no offence of course!!

How about KRoc then?

Nope, I'm stumped. Sorry. But best wishes for a good time in the van :-)

Thanks Phil. We are aiming to sleep in it next year - if the weather ever gets warmer!

Oh then call it the love shack, fp. 'A little place where we can get together-er. Love shack baby.'

A Moll's travels? Er the perspective from the streets, a dog's eye view, fringe benefits, poop and scoop, a bitch abroad, travelling on little legs. I don't know, sorry.

Phil - those are great! Love em all - many thanks!!