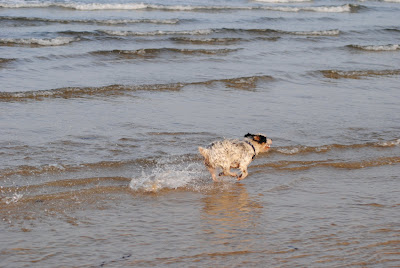 I often think Molls looks rather like a cross between a rabbit and a sheep when she's in full flow - this is her on Maenporth beach a few weeks ago.

For someone who can’t eat chocolate, Easter is very much a non-event though this has never bothered me. So I was amazed to find myself the recipient of several unexpected gifts:

Joe painted the garage for me and is now painting the door as well, dear of him.
Richard turned up with several books with historical background for my latest walk;
Mel gave me a bunch of bluebells from her Dad's farm;
Andrea gave me two of the most beautiful geraniums I’ve ever seen with frilly leaves and stunning, dark pink flowers. Definitely the Prince Charming of geraniums;
Viv gave me several aquilegia – their purple and pink nodding heads smile at me every time I walk up the steps;
And Paul promised me a chicken from his farm.

The weather has been fabulous which always helps - I sold Pip's BlackBerry on Easter Monday which wasn't easy, but having good friends with me helped a lot. We then went for a walk around the Lanhydrock estate which turned into one of those How Many People Does It Take To Read A Map walks. Despite (very bad) written directions and Richard reading the map, on which I had highlighted the route – which looked very simple on paper – we spent an inordinate amount of time getting lost and asking other people.

It didn’t help that my camera battery was flat so I couldn’t take a single picture, when the bluebell woods were stunning, but everywhere was so beautiful that it’s stored on the hard drive in my head. At one point I was telling Richard about someone Viv and I had worked with. Evidently my storytelling skills are sublime, for the next minute his lunch box shot out of his hand and tumbled down the riverbank. Luckily he rescued it before it sailed downriver, but by this time we were all laughing so much none was capable of doing much.

We arrived back several hours later, with Lanhydrock house basking in the sunshine, and outside the Yew tree topiary stood proud like a chess set out of Alice in Wonderland.

It was a day I will never forget. For all the right reasons.
Posted by Flowerpot at 09:10

I could look at that picture of Molls in full flow for ages, it's so full of glee. Love it.

I'm glad you had a good Easter and those presents you've been given sound wonderful. x

The moment you mentioned the bluebells I SAW them in my head too. It's a good thing they were stored efficiently in my hard drive because I'm not going to see any here any time soon!

Debs - dear Molls she is a great tonic!

JJ - I'm sorry you are denied bluebells - they have such a fabulous sweet smell as well as their gorgeous haze.

That's a great picture; believe me, Molls is far more beautiful than a sheep!

Sounds like you've had a gift-receiving weekend. Bluebells are much better than chocolate anyway!

CJ - yes I prefer bluebells to chocolate any day!

What a great picture of Molls!

I'm so glad to hear you had a good Easter and the gifts you received were much better than chocolate eggs. :)

Ak - Molls is the photogenic one!

I love that photo of Molls! Glad you had a good Easter.

Those all sound like perfect Easter presents and to add bluebells to that - wonderful. Glad you had a good walk too with some laughs. xx

Sally - they are wonderful bluebells, not like any I've seen before. And they're lasting really well, unlike normal ones. See you at singing!x

Molls is gorgeous.. reminds me of the cartoon when i was a child Rhubarb & Custard hehe

Tracey - I remember those cartoons - good to meet you.