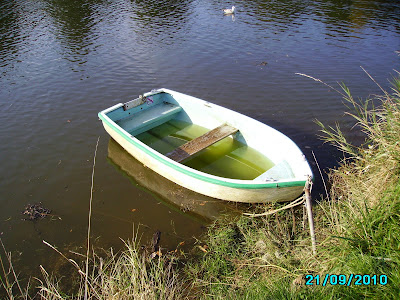 I had the most amazing week – Regent Cottage is lovely with a wonderful secret garden, and going somewhere on our own (me and molls) with no former associations was just what I needed. I felt happy and secure there and fine on my own – in fact relished the time I had to myself.

I missed Pip, of course: we had been to Penzance on many occasions, but it felt fine to be there without him. Partly what made the week so good, I realised, was that I wasn't constantly worrying about him. Whether his cough was bad, was he OK on his own, should I hurry back to be with him. Did he want to go for a drink, had he got a video to watch, enough to read etc. Was he feeling down, was he too tired? What did I need to do? Going away made me realise how much of a strain the whole of the last year was - not just the last few months.

For once all I had to do was look after myself and that made life so much easier. Freer. I bumped into all sorts of people I knew – all to do with writing – including Peter, who's organising the Penzance Literary Festival which he's asked me to take part in again. I met another journalist who belongs to the same journo forum as me. I visited the wonderful Book Cafe in St Just and got talking to more writerly, book loving types who were fascinated to hear that I write walks.

Viv and Titch came and we did three wonderful and very long walks, getting lost along the way. At one point we met this red haired sprightly fellow who was also pounding the coastal footpath – we'd bumped into him the previous day but he seemed to have shed his girlfriend and gained two walking sticks.

“How come he's so sprightly?” said Viv as he whizzed up and down the granite strewn path.

“He doesn't have two dogs, three guide books, a map, a tape recorder and a camera,” I muttered. As Viv has just had a Significant Birthday, I didn't add that he was also 30 years younger.....

So the week was productive, exhausting and fun. Coming home was tricky, suddenly hit by an avalanche of emotions that crashed over me like the waves at Land's End. And since then I am beset by sudden plunges of grief that hurtle me down like a tombstoner. But that's bound to happen. I take a deep breath and swim underwater. Go with it, don't fight it. It passes and I reach dry land again.

When I went to pick up Bussie from the vets they said, “You can't have him back! We love him!”

Needless to say, His Lordship has been horribly spoilt but has become very affectionate and has taken to sleeping on the bed as well as Mollie. So there I am squashed somewhere in the middle: a Flowerpot Sandwich. I was wondering about getting a smaller bed now, but have decided it's just as well we have a King Size bed......
Posted by Flowerpot at 10:33

It's good to hear you allowed yourself to have such a good time and I'm glad you enjoyed it. x

So glad the break did you good. It is eary days yet and the waves of grief will keep washing over you. Best to bob about like a little cork and wait for them to recede. Gradually the waves come in less and less. I am sandwiched most nights between Snoopy and the cat. Sometimes I long to stretch out, but mostly they are wonderful company for me, so i shouldn't grumble. Hugs.

Had a brief taste of St. Just last year. We MUST to there next spring so I can have a good look round. Also would like to walk on Cape Cornwall and maybe even part way out towards Sennen? Happy your week turned out so well. Much love, SIL.

I'm delighted that you got the much-needed break you deserved, even if coming home was a bit bumpy. You took a huge step - well done. Cx

So glad you had a good week.

How lovely that you've had an enjoyable week and found some inner peace. It sounds a lovely place. And it seems reading between the lines that you might have reached a defining stage.

Pip would be proud of you. You are bound to have these ups and downs. Make the most of the days when you feel a little stronger - use them to get you through the tougher days. And you will at least see now that good follows bad, follows good days, and hopefully the gaps in between will get longer.

So glad you had a good time away, Sue - you deserve it!

Glad you had a good time xx

WELCOME BACK!!! I'm so glad that you had a wonderful time and all was well on your return too!!!

MLB - I certainly did thanks. Shattered now but in a healthy way!

I'm really pleased that your week's holiday was such a good break and look forward to singing again with you at the next Suitcase session.

Debbie - thanks so much for your very kind and encouraging comments. Some inner peace is a bonus and much appreciated!

Shirley - a Flowerpot sandwich does not encourage sleep as I get so Hot!!

Thanks Chris - it's been a bit bumpy since then but yes it was a big step so bumps are bound to happen. Must nip over and see your news now...

Shelagh - the next walk I'm sending you is part coastal footpath to Sennen and then Cot Valley which you will love - and it's shorter and not as strenuous! (Why is it that the comments are all stockpiling at the beginning and mine at the end? How curious...)

Sally - how lovely to see you here and thank you so much for your lovely comments. Look forward to seeing you at singing in a couple of weeks - I can't wait!

Addy - I agree I shouldn't grumble either - they are great company!xx

Ak - thanks. I was very lucky to find such a great cottage!

I'm glad your trip went so well and that Bussie is back home again.

Grumps takes up so much room on the bed, you'd never think he was only 14" tall!

Linda - the secret garden is lovely. I had my lunch sitting on a bench underneath an apple tree, with the first bluebells growing nearby. Happy sigh....!

Debs - how is it that animals manage to extend themselves so much on a bed? Molls does the same as Grump!

So glad you had a lovely time, it sounds a wonderful place x

Mandy - it certainly was!

A Flowerpot sandwich! I love the image.

I'm so glad you had such a good break!

Talli - as the weather has got warmer, thankfully His Lordship has decamped to his former night time bed which is the sofa. Makes it a bit cooler for me and Molls...

That's picture is lovely on this post. Glad to hear you enjoyed your time away. I can imagine it must emotionally draining for you having to adjust to a new way of life.

CJ - it's not draining - just very confusing. Life is so different yet the same and there was nothing in between to bridge the Before Pip and After Pip lives.