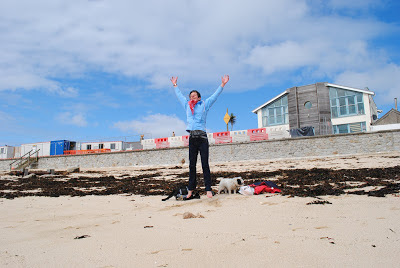 This was taken on the Isles of Scilly on a sunny April day - yes we did have some sun last year!

Last Christmas was one of the best I’ve had for a long while, whereas this year it was really hard. I was looking forward to it, but on Christmas Eve morning a load of gremlins crept into my pillow and took up residence and as a result I had a very soggy time. (I was talking to a friend later and said, “don’t you find crying makes you terribly hungry?” She laughed. “Sue. Everything makes you hungry.” She has a point.)

Anyway, I’d just about struggled through the Festive Season, tearing down my Christmas cards in a fit of weeping rage, swearing that next year I will go away and not have anything to do with it, when Boxing Day came along and I breathed a sigh of relief.

Then on Friday 28th I had a very cheering phone call from a dear friend, and came back home feeling happy for the first time in a while. Turned on the computer and saw an email from the agent who was so keen on my novel. I almost didn’t have the nerve to read it, but of course I had to. And it’s a No.

While I had sort of been expecting this – or preparing myself for this – the reality is hard to deal with. It’s like dealing with an abusive lover who kicks you in the stomach, gives you a black eye, then turns round and says, “Sorry, darling.” So you try harder next time. And still they beat you up. You weep, rocking and clutching the pain and wondering what it is about you (or the novel in this case) that isn’t right. And still you keep going back. (I would add that this has never happened to me, in case you’re worrying, but it has to one of my best friends.)

I’ve had some lovely messages of support: Nik said that every time I get closer and closer and there must be the right agent out there. It’s just a matter of finding them, which I will. Deb said, “I couldn’t do it, Sue. I don’t have your perseverance, your tenacity,” as I wept down the phone displaying neither of these characteristics. And Christy said, “this happened to me, Sue. But I’ve read your writing. It isn’t you. Hang on in there,” which made me burst into tears again.

I’ve read several books recently, but none of them are ones that I’ve really thought, “wow!”. So I think this must be what it’s like to be an agent. You can read a book and think, well, there’s nothing wrong with it. I just haven’t fallen in love with it. So I need to find the right agent who will.

Life tends to kick you in the teeth when you least expect it, or are able to deal with it. But listening to a programme about victims and survivors this morning on Radio 4 made me think, I refuse to be a victim. I’ll weep and wail, have a few drinks and start over again. I won’t give in.

So I leave 2012 on a downer. But it means I can start 2013 afresh. I shall be boating again shortly (hooray), I’ve got some lovely things to look forward to - a sailing trip on a Tall Ship being one – and will send my novel out again to another agent. Someone, somewhere, must fall in love with us.

It must be 20 years or so ago that I kept having my short stories and children's stories constantly turned down. I still write occasionally. It is like a kick in the teeth but let's face it, if we were celebrities, had had loads of cosmetic jobs etc done, we wouldn't have a problem. Like you, very few books really grab me and it is difficult to see what they have that makes an agents take them one. Maybe we just don't move in the right circle of 'people'. You are however, a printed author so that is good. Also, your writing is never wasted on your blog, think of how many people read both your written works. Keep it up!

That`s the spirit! Just keep plodding on, regardless of the bad vibes and the kock backs. Eventually something will click for someone out there and you will look back on the whole horrid experience and wonder what you were so worried about. It`ll happen eventually. The time`s not right yet, but the tide is going to turn soon.
Happy New Year!!

As they always say, the only difference between those who get there and those who don't is persistence. Thousands of would-be writers give up when they are rejected and never send anything out there again, then bemoan the fact that they never got published. Real writers dust themselves off and get back on the horse! Good luck for 2013 - hang in there.

Of course there's an agent out there who will love it! It takes lots of writers a while to find their agent -think 'Lord of the Flies' and 'Watership Down' - those novels were left hanging by many who must have lived to regret their silly decision!

2013 will be better -there'll be sailing and singing and, we hope, sunshine and then - out of the blue will come the agent.....

Lots of love to you, Sally
xx

Flowerpot - I think it is definitely a case of compatibility. You have to be in the right place at the right time with the right person for them to say "Yes, I want to publish your book." It will happen keep trying! Mx

Oh Sue, I'm so sorry you had a rough time around Christmas. I did, too, and it just makes it tough all around. The rejection makes it that much worse, BUT, you ARE a survivor, and you're absolutely right - you must find the agent that will fall in love with your work. You want someone who desperately needs to get your story out there -that is who you must find, and find them you will!

Oh thanks Melissa and I'm so sorry you had a rough time. I had ahorrible superstitous moment over the last week thinking that 2013 would be a really bad year so hope I'm wrong!

Morton - you're quite right. And try again I will.

Thanks Sally. It's almost worse when you're all so kind. Setting me off blubbing into the keyboard again!

Sarina - what a lovely lot you are. I feel very touched by your belief. Going to see a film in a minute then off to the pub....

DC - you're right too. I'm amazed how many people do read this blog - and don't comment! Or comment later in person. Thanks.

If one agent liked it that much, then it must be good. So few novels even get a full reading. You've obviously got something. Sorry it's been an un-festive period for you. Here's to a successful (and by that I mean happy) 2013!

It will happen eventually, maybe 2013 will be your year, I hope so x

Chloe - it's been shortlisted twice now which is really frustrating! Thanks for your thoughts.

Wow, that is frustrating! Encouraging, of course. But very frustrating! I hope therefore that WHEN it happens for you, it will be all the sweeter :)