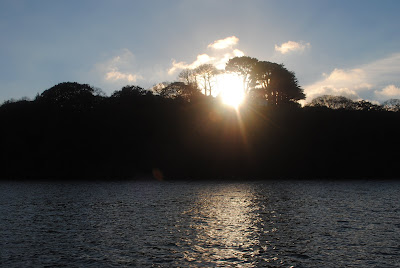 Sun going down, from the water.

When I mentioned I’d been boating a few weeks ago, a few friends looked at me as if I was mad. (No, don’t answer that one.)

Well wrapped up (and for someone who feels the cold, I have to), it’s a very different experience from boating in summer. The sense of peace and space, of tranquillity and nature is more pronounced. Coming back at dusk, I had the strangest feeling: the engine chugged along but only by looking at the riverbank could I see that we were moving at all. It felt as if we were suspended in time and motion.

When the light leaks from the sky, dusk has a supernatural feel to it, as if anything could happen. Hobgoblins could whisk us away, space ships could land on deck – or we could sail off into the deep blackness of a long night.

One day, we passed an old tree that had been struck by lightning: its bare branches stuck up in the gathering gloom like arthritic fingers. It’s become a heronry, and occasionally you see the big birds huddled in the tree like vultures. Otherwise, I’ve only ever seen herons alone, standing in silent contemplation, or watched them flap lead-heavy wings, limping into the sky. I’d always thought of herons as being serious birds, but that afternoon, looking up, we saw four herons wheeling and cavorting in the sky; stark silhouettes against the stealthy dusk. A joyous image that will stay with me forever.

Being on a boat at dusk – or dimpsy as the Cornish call it – teaches you to look at the sky differently. One night we saw orange in the sky that burnt to a boiling, fiery red. In between Everest clouds, the sky shone through, pale blue, then a delicate pink, a pearly purple. As we looked back, the reflection in the water behind us was orange, underlaid with mother of pearl. And just before the sun disappeared, the sky was shot with a scorched rainbow of colours, as if the horizon was on fire.

There’s a tranquillity about boating in winter; of being the only ones on the water as the afternoon light fades. Foolish, say some, but to me it’s very special, like a treasured secret. Few people wish to share this sensation, preferring the comfort and safety of a walk in the park, or crumpets by the fire. I love both of those, but the delight of boating in winter is an added extra that I hug to myself on the days when the sea is a beckoning glass flat and whispers in my ear. “Come out,” she says. “I’m ready.”

I used to wonder at Pip, Pete Goss, Ellen Macarthur, and the countless other people who have fallen in love with boats. Now I know. They sing in your head, nestle in your heart and seep into your blood. Like the tug of an absent lover, they won’t leave you alone.

What a beautiful piece of writing.

Thanks Susie! How are you? x

I can imagine winter boating would be very tranquil. Here's hoping you don't capsize... brr!

Talli - a slight lull in winter boating, so I'm on bailing out duty - we haven't capsized yet!

Ooooh, Flowerpot, you've gone all poetic. You created those images so beautifully that I was right there with you on that boat.
The only place I have seen herons in any number was from the terrace of the Heron Inn at Malpas.
It was spring, and although they were in the trees across the water, the young birds could be seen quite clearly in their nests. Magic!

Thanks Mandy! Good to hear from you again x

Rena - I can do poetic when in the mood! That's a good reminder to go back to Malpas in spring to heron watch. Thanks!

I'm definitely not letting Tom see this post!... Although it does bring back memories of being on the boat in winter on Milford Haven. It sounds a wonderful trip, Sue.

Chris - no, this post should come with a Boating Addicts Health Warning! Hope you are OK - it's v cold here in Cornwall!

Addy - it certainly isnt for everyone. In fact, very few. But perhaps that's just as well or there'd be too many of us out there on winter days!