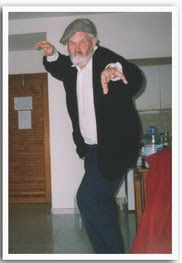 (This is Himself, Not Entirely Sober, which befits the ending of this post.)

There is better news this week, I'm glad to say, after The Week From Hell.

Poor Bussie (large black and white moggie, sole male resident of Flowerpot House) had to have a second operation to stitch him up following a bad cat fight. He's been in the vet hospital for a week now but hope he can come home soon although Molls and I are away in a few days – my dear brother in law will be looking after Bussie though. I am trying not to think about The Bill which has reached £200 and add on that another week of vet hospital fees plus food and flea stuff etc......

But I have two bits of good news: I have got a commission to interview Bill Bryson in June. And I have just been to have a meeting about a possible project with Cornwall & Devon Media.

The third thing is that Molls and I are going on holiday on Saturday. While I know I need the break, I am a little apprehensive about how I will manage. Here, at home, Pip is all around me. Where will he be in Penzance?

But I have deliberately chosen a cottage we've never been to before and it sounds ideal. It has a garden, parking for two cars and is close to the sea front. Near the pub where we went last time we stayed there. It is round the corner from a friend of mine and from our dear cousins.

So I have a support network in Penzance which is good to know, and a very good friend is coming to stay, as is my mum for a few nights.

And I do have this very strong feeling that Pip is with me. It's nothing as clear cut as walking along beside me, but he is around – on the outskirts of my emotionally peripheral vision. I can neither see him nor touch him but he is definitely there. A friend who came to stay the other weekend commented on it, unprovoked, so it's not just me.

Life is full of Firsts right now - the first time I do things without him. Now it's going on holiday. Bill Bryson. First trip to London in years.

So Molls and I will go to Penzance and Pip will come with us. He will even come walking, which he would never do normally. But I think I will take a photo of him with me just in case.

A few (good) things are happening, and as Helen Keller said, “When one door of happiness closes, another opens: but often we look so long at the closed door that we do not see the one that has been opened for us.”

I can hear Pip rejoicing at my good news. “Come on Flowerpot,” he will say opening a bottle. “Push the boat out!”
Posted by Flowerpot at 15:24

This just made me cry, and I don't know if they are tears of happiness or sadness, or perhaps the two mixed together. I'm happy and sad for all at the same time...and that just leaves me thinking that life is just so confusing. x

And I would agree with Pip.

Congratulations on all your good news and here's to a fabulous holiday with Molls.

I'm glad Bussie is on the mend, although it sounds as if he's really been through the mill, poor thing. x

Thanks Debs. He really has been through the mill but was very Vocal when I went to see him just now!

Laney - I think you're right. It's both - and yes, life is very confusing. x

Squeal!!! How very exciting! I love Bill Bryson's work and wish he knew that he has at least one enthusiastic fan out here in Trinidad.

That said, congratulations on all your good tidings. It must be such a comfort to feel that loving presence at this time.

Glad Bussie is getting on well.
Great news about Bill Bryson and the possible project.

You and Molls enjoy your holiday; it will be a happy-sad time for you but you will tiptoe through that open door. And, of course Pip will be there with you.

Lovely! Ah Sue, I think you'll have a fine time in Penzance, take that photo with you, prop it up against the bottle of wine and have a glass or 3 together!

I love Bill Bryson's writing, not so keen on his voice, strangely enough! I had to stop reading his books for a while until his voice left my head!

Gentle hugs for Bussie, glad to hear he's on the mend. xxxxx ♬

I love your positive attitude. I know that there are times when it is completely overwhelming and positivity is the last thing on your mind but you seem very 'together' and I congratulate you on that. Your quote at the end is brilliant - I may have to borrow that!
Enjoy your holiday and embrace that 'new normal' that I keep going on about.
x

Enjoy your trip - you know that its what he would want you to do.

MLB - good news has made me feel a lot more positive, but overall I am quite a positive person. Usually. I find life's a lot easier that way. Mind you I have a very good support network which makes a big difference.

Giselle - my friend Viv is coming down and as she was 60 last weekend, methinks there will be a few bevvies over the week!

Thanks Pat - your comments are always very encouraging and bring a happy and heartfelt tear!

Liane - yes it is a comfort. Might sound like I'm walking around with a ghost but it's a very nice one if so!

As for Pip, he is most definitely around you and will be willing you on when you go away. Have a lovely time.

CJ - Bussie is much better thanks - such a relief. Lovely vets are goig to look after im while we're away so I dont have to worry about his stitches which is great.

I can't imagine how hard it must be to carry on without your dear Pip but I am so proud of how hard you are trying. Wherever you go he will be with you, you know that, so go and enjoy your holiday in the knowledge that he'll be enjoying it with you.

Congratulations on all your good news Flowerpot. x

I've never heard "push the boat out" before, how wonderful♥ So pleased to hear all your good news:) Poor Bussie, he has had a rough time hasn't he. A holiday with Molls in Penzance is just what the Doctor ordered. Pip will always be with you FP, he lives within your heart♥ xxxxx

Linda I think Push the Boat Out is very much a Pip expression. At least I've never heard it from anyone else either! And thank you for your lovely comments.

Thanks Ak for your lovely comments too. I was trying to explain it yesterday to one of my editors. It's like suddenly walking into a different life which has somethign of the old one but happened so suddenly that it's difficult to bridge the two. Very unreal. But yes Pip will come to Pz and enjoy it - he won't get a hangover!!

I love that you can sense him all around you - and I'm sure he is, too.

And oh, how fantastic about Bill Bryson! And the holiday! Good things are happening.