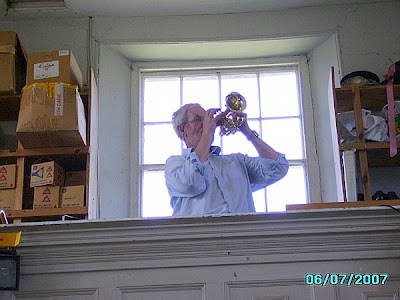 I’m exhausted this morning, recovering from a musical soiree. That’s a slightly grand description of last night, but it was a very late night for us.

I started off with rehearsals for Pajama Game where we sang more numbers and learnt the steps to Seven and a Half Cents. The new choreographer is tiny, with huge eyes and long un-mascara-d eyes, and is young enough to be my granddaughter (well, nearly). But she has patience and understanding which makes her a great teacher. Just as well – trying to teach thirty lumbering adults steps to a number in a small room is not easy.

But I got a real buzz from it. Being in at the beginning of a production is very exciting – like starting a novel, it’s a real adventure, full of unknowns. New people, a new plot, new songs, new moves and who knows who will play whom?

Auditions are all day on Sunday so as you can imagine, the atmosphere was electric. Everyone eyeing each other up, while being nice and smiley, thinking, “I want that part. I want it so much that – or should I go for Babe? Or Mabel. Perhaps I’ll go for them all.”

Given my dubious health this year I’ve opted to go for the chorus which will be taxing and time consuming enough, but that means I don’t have to attend auditions – though I might call in and see how it’s going.

Anyway, after that I drove a friend home then went back down to town where Himself was sitting in with a jazz band for the first time in nine years. He was very nervous but a friend had rung that morning to say her husband was also sitting in and would Himself come and join them, so it made that first time a bit easier.

In fact the band was run by someone he knows and it was her father and mother who came along to sit in – Bob is a wonderful sax player and Ruth sings with a raunchy blues voice. A wonderfully talented pair, and their daughter led the band playing guitar (she also plays the bull fiddle) so they’re a very musical family.

Himself played several numbers in the second half and excelled himself. He even played a solo which he’d refused to do, thinking he wasn’t good enough. When he and Bob played, the influx of students who’d suddenly materialised started stamping and shouting, whistling and clapping. Outside people peered in through the windows to see who was playing. The bored youngsters serving in the chippy opposite stood up and started jiving behind the counter.

That sounds fantastic FP. As a neighbour, would we be one of the first on the list to get signed autographs from the famous duo? ;@)

Of course you would RT! It was a good gig and he's going to go down every other Wed now and sit in which will be great. Trouble is they dont start playing till after the break, which is 10.15 so it is a late night!

Sounds like that jazz band scene in The Aristocats!

Found my way here through lady thinker's link to your Old Friends post. Lingered a while and had a lovely time, thank you :)

Philipa - yes it was great fun.

toby - it was just like that jazz scene inthe Aristocats - thanks for reminding me! Glad you enjoyed your stay - p,ease call again soon!

Laurie - audiences are vital. Without them musicians of all kinds would be stuck. Practising is one thing but the whole thing only comes alive when you have an audience, and one of the most valuable talents is listening and enjoying - that's what makes it all worth while.

You two will be famous! Keep us posted won't you?

PS I've posted the first of my Christmas Carol Quizzes today if you fancy a go.:)

Ak - well, I won't be famous, but Himself might be! I'll nip over and have a look at your Christmas Quiz right now.

How lovely, my son used to play trumpet and gave up, he may regret it one day. He is in the school production of 42nd Street, pity you are too far away to see it.

How wonderful. I'm not surprised you were proud. I used to play the violin in a band but they needed more commitment than I could give.

How fabulous, good for you.
Best wishes

ellee - how wonderful. I'd love to see 42nd street - am sure he will do you proud, too.

Crystal - the violin always strikes me as incredibly difficjult to play well - good for you. I was made to play it aged 11 and made a terrible noise, but it's a lovely instrument when played properly!

mcewen - good to meet you and please call again soon!

Wonderful that you're both doing what you love:-)
Great photo too!
x

lane - yes we're lucky - and a cheap hobby! The picture was taken at my mum's chapel actually but I haven't got the photos from Wed yet from Ruth.