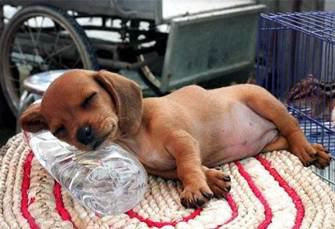 And this afternoon, to dodge the doggy theme entirely, we are off to see Fisherman's Friends in Truro. Go for it boys! They've got a movie deal now!
Posted by Flowerpot at 10:05 26 comments: 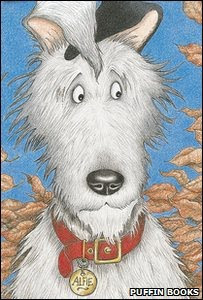 The above is one of Jill Murphy's illustrations from Dear Hound, her latest book. Recently I was lucky enough to interview Jill Murphy, author of the Worst Witch series of books, who has turned to her own dogs for inspiration for her latest book about a deerhound that goes missing. See link to the interview here. Jill is not only a highly talented writer, but a fabulous illustrator as well and there are some heart breaking pictures in the book which derived from a true incident when her son's dog went missing.

Thankfully Dear Hound has a happy ending, but Jill's life hasn't been quite so straightforward. She's a bubbly, very attractive lady, a mix of very strong and very sensitive, and very close to her 19 year old son (and vice versa).

She has also overcome incredible hardship in her life. As a single mother, she discovered that she had breast cancer when her son was young. She got over that only to find that her mother had dementia, and made the barn next door to her house into a flat so her mum could live there. When her mother died, she discovered her aunt had dementia and brought her to live next door.

At one point, Charlie (her son) said, "Mummy do you realise we've spent the last 7 years looking after mad old ladies?" And yet Jill had some wonderfully funny stories about this time in her life (when she was also bringing up a teenage son and working). "It was a privilege to look after them," she said.

A lot of writers I've met recently have undergone a lot of difficulties, and some keep writing no matter what, whereas others don't feel able to put pen to paper. But in the end, I suppose we all muddle through.

I find work a solace, an escape. But obviously if you have a very sick partner it's not always possible to write if you're in charge of nursing, or driving to hospital. And sometimes it's just not possible to write.

But sitting on Jill's sofa, being licked to death by her gorgeous dogs (and they really are huge and lovely), I felt such admiration for this gutsy lady who, rightly, is very loved by all around her. Do read Dear Hound. It's a fascinating tribute to some very wonderful dogs.
Posted by Flowerpot at 09:53 14 comments:

A week of Surprises

The last few months have been difficult, observing Himself's breathing difficulties, but following extensive lung function tests and X rays on Monday, we were relieved to find that his lungs are only fractionally worse than they have been, and as his cough is improving very slowly, the consultant will see him in another three months and assess his breathing again then.

Having been told last time that the prognosis for his condition was 2-3 years, and now being told that actually he seems to be reasonably stable, you can understand why I've been worried. And he has been increasingly quiet, lacking appetite, not even enjoying his beer. As a result he's lost weight and several people have commented on how pale he is. So as we drove back home I said to Himself, “you must be relieved.” (Understatement of the year.)

“Oh, no,” he replied, gazing out of the window noncholantly.

I stared at him, stunned. “- er, what did you think had been going on over the past few months then?”

I won't repeat what I said, but I relayed this to a friend who rang up later. Her reply was instant. “What a load of S***E” she said briskly. Which I have to say, I go along with.

But who could ever explain the meanderings of the male mind?

Another surprise – which has to do with the workings of the female mind, I'm glad to report – came today when I collected Himself from a job in the High Street. He'd been making some shelves for a young mum, and was very chirpy when I picked him up.

“She was very interested to hear how we met,” said the old lothario. “Said it was very romantic.”

Being full of sinusitis, I grunted in non-romantic fashion.

“And she gave me more money than I thought, and something for you, Pop.”

At that moment she appeared and waved from the front door: an open face with a warm smile. “This is my wife,” said Himself, and she smiled even wider.

“Nice to meet you,” she said, and turned to Himself. “See you soon, Pip,” she said, like they were old buddies.

I looked from him, down to the large jar of Quality Street in his lap, then at the bunch of paper wrapped tulips: the palest pink with a brush stroke of red.

“Thank you,” I said with a lump in my throat. I wondered what we'd done to deserve that, and reflected how such gestures can transform a day.

My smile as we drove away was almost as big as hers.
Posted by Flowerpot at 15:11 16 comments:

My Hero - Wheelyboats and Flu

I'm just getting over (I sincerely hope) the worst fluey cold I've had for years. You know, where everything aches, including head, you get shivers the whole time and have not an ounce of strength anywhere. Even my hair has gone straight. Luckily Himself isn't too bad this week so he has been walking Molls (ie Very Short Walks) and will be in dire need of a Long Trek as soon as I am able.

Anyway enough of that. On to better things. Back in 1984, Himself was approached to design a boat for disabled anglers. He did the preliminary drawings and these were then taken to a marine architect to polish off (though they looked pretty polished to me). The boat was then launched by Prince Charles in 1985 and has gone from strength to strength - or so we gather. Himself was disillusioned by some of the people involved and decided he didn't want to be involved any further. As a result he declined any money or kudos.

Well, a few weeks ago he was in the van and heard something about Wheelyboats in Cornwall. We googled it when we got home and found that one's being used not far from us - and patrons include Jeremy Paxman and Bernard Cribbins (Curiouser and Curiouser...) so I emailed the Wheelyboat Trust and said "guess what? I'm married to the bloke who did the original designs" - or words to that effect.

Himself is far too modest to blow his own trumpet - pardon the pun.) I told him what I'd done and he looked horrified. "What did you do THAT for?" he said, as if I'd torched the place. I grinned smugly - I'd had a lovely email back from the Director of the Wheelyboat Trust saying how delighted he was to hear from me. He also said they'd sold over 100 boats and were launching the Mark III version of the Wheelyboat soon in Cornwall and would we be able to come along? You bet!

So any day soon we are off to Golant to meet Dick Strawbridge (he of the bulbous moustache) and other bods from the Trust and see Himself's fine work put to good use. I'm also writing a piece about it but if you want to see more about this great invention, here's the link.

Three cheers for Himself. I am so proud of him and he SHALL have his moment of fame...
Posted by Flowerpot at 16:24 17 comments: