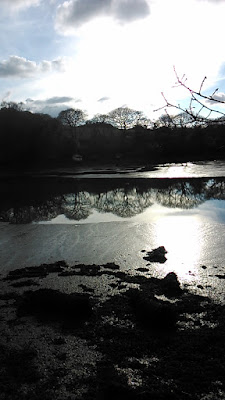 As all my friends know, going on a new walk with me usually involves getting lost. If it's a new walk, getting lost is a prerequisite. Not that I plan it that way - it just happens. In fact the picture above was taken from a walk I know so well because I've done it many times over the years. It's a quiet creek near Truro that, when Carol and I went last week, was perfect - a bit of rare sun, a burst of birdsong, carpets of primroses, shy violets and the first bluebell buds. We were able to take pictures for the first time in what felt like months of grey, drab weather.

On Saturday I went to a walk organised at Polly Joke - there were 30 of us which i found a little daunting, but everyone was very friendly and I knew several people, and we ended up walking in lots of little groups, swapping round, so we talked to lots of different people. Mind you, Moll quickly decided she was going to Lead The Way, so I ended up at the front of the pack, running to keep up with her.

Polly Joke was Pip's favourite place, having spent some of his teenage years with his uncle and aunt who lived there, and I have many fond memories of visits there, picnics with my family, friends, and burying tin on a part of the cliffs near the tamarisk trees. It was a bittersweet day that suddenly, for some reason, made me miss Pip with a hollow ache that made me howl my eyes out the following day.

I was talking to Viv about it and she said, "I know just what you mean. I felt like that about Mum today," (her mum died last year).

And while no, I don't believe I do have suppressed my feelings for Pip at all, I do think that if you love someone, grief does bubble up like that. It's not a bad thing - it's just part of how those we love, live on with us. And every now and again give us a little nudge... 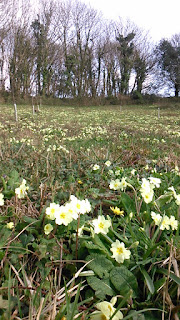 The importance of breaks 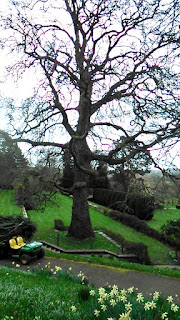 Towards the end of last week I went up to see my mum, and took her round the lovely Dartington Gardens on Friday morning where, despite the ongoing monotonous grey days, spring had put in an appearance. The grass was studded with purple crocus, violet periwinkles, dusky red hellebores and delicate fritillary, while the banks of the old jousting area were covered in a spring duvet of primroses. Magnolias sang from elegant trees towering above us, and birds rejoiced next to us.

My dear mate Av met me at mum’s and after lunch and a catch up (my mum refers to Av as her other daughter), we set off to walk Moll at Staverton, then to Totnes where Av had booked us into a B&B for the weekend.

Not having been away for a while, I was very aware of how important breaks are. However much we may (or may not) enjoy our day to day lives, having a change of scene is very beneficial. Av and I have known each other for well over 20 years now and been away many times so we know when to give each other space, what each other likes etc.

We explored Totnes market, visited the charity shops, walked miles with Moll, and found The Albert (after Einstein), a brilliant pub down the road from where we were staying, which did a home made pie and a pint (or glass of wine in our case) for £8.50 as a special offer on Fridays and Saturdays. No prizes for guessing where we ate.

We sorted the world out, had a lot of laughs, a few tears, and while I still find it hard coming back to an empty flat, it was lovely to have that time together, and with my mum.

I’ve now got another streaming cold, but despite that I’m looking forward to the next break, though having busy lives, it's important to put aside some time. Exmoor is a possibility, and Av and I are planning another weekend in October. Who knows what else may come up? 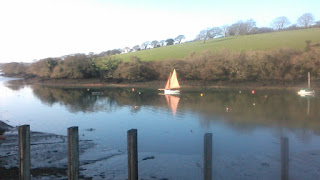 Mylor Creek on a misty, sunny afternoon several weeks ago now. Perhaps we have had some sun after all - just not in the last few weeks!

I had a phone call out of the blue the other day, from someone asking if I’d help her write a biography for a presentation she has to give. Somewhat bemused, I said yes, I’d certainly help if I could, and only later asked her how she’d found me. On a website of Cornish speakers, apparently.

I still wasn’t too sure what this work would involve, but we agreed a fee and earlier this week she came to see me. It transpires she has to give a talk at a conference of some 3,000 people and is terrified. Would I be able to help her write her biography and give any tips about giving a presentation?

So we sat down and I made notes, then typed as much as I could, while she was there, to get the flavour of her words, who she is as a person. I’ve worked on it and sent it back to her, and we’ll do that back and forth until we’re both happy with it.

I remember practising my first talk, being terrified. Slow down, said a friend. Don’t gabble (we all do when we’re nervous). Make eye contact. Smile. Include humour. If things go wrong, don’t worry, work that into the script - just talk as you go along.

The first time I sang in public in my smaller group (being in a large choir is much less daunting), I was convinced I would dry up and no sound would come out of my mouth. In fact I sang fine, but my legs were shaking so much I literally thought I was going to fall over. The second time I sang in public, with three of us, I didn’t really know the song, having been drafted in at the last minute. I had a complete blank, forgot my notes, and laughed. So did everyone else. We started again and it was fine. And after that, I’m not paralysingly nervous any more. I’ve had lots of other things go wrong, but tell the audience what they are, and include them in whatever’s going on. After all, it gets boring if things go according to plan all the time.

But back to this job, and I realised, I love this work! I’ve always said my dream job would be Desert Island Discs - all that research and then interviewing people would be just up my street. And I love radio. But doing this is a good second best!

So if you know anyone who has to write a biographical presentation, and needs help, please point them in my direction! 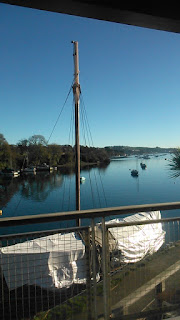 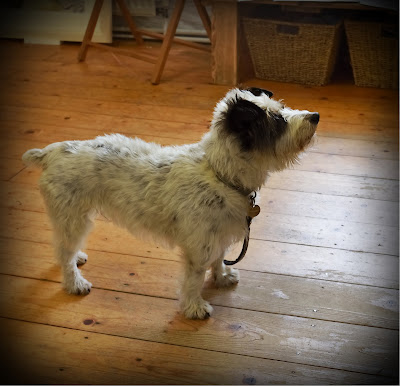 Butter would't melt, and all that....

My cat, Bussie, is now 18 and as irascible as ever, though noticeably more cuddly than he ever was in his youth. Another change is in his attitude towards food. He used to eat anything and everything (like Moll) to the point where my brother in law accused Pip of killing Bussie with kindness (good for Pete), but nowadays he's much more picky, and as a result lost a lot of weight.

So when I came back a few weeks ago and saw both his dishes licked clean, I was surprised but pleased. Then it happened again, several days running and I became suspicious. Particularly when I found a broken dish on the floor.

And with good reason. It turns out that Moll has been jumping onto the chair specially put there for Bussie, and jumping up onto the shelf and eating his food. Hah! I thought. I'll stop her. So I took the chair away, which means that Bussie has to jump onto the table, from there on the dresser and make his way along a narrow shelf to get to his food.

That worked for a few days, then I got back yesterday and found smashed saucers on the floor and a very guilty looking Moll - you know when they won't look at you, and slink along the corridor? That look...

So now when I go out, I have taken to removing Bussie's dishes to the table by the cooker, where neither of them can get at them.
That seems to be working. For the moment.... 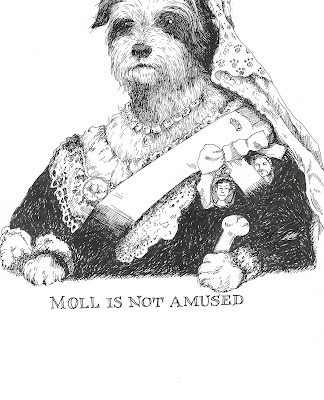 Greetings and apologies for silence for the last week or so. I somehow managed to obtain a very painful shoulder which stopped me from functioning properly. However, it is now on the mend so normal service resuming, to my great relief.

It didn’t stop me enjoying my birthday which was full of dear friends, lovely walks, sunshine (in between torrential showers) and good food. What more can you want?!

I now have a lot of catching up to do, but sent my novel off to an agent this morning (gulp) and need to get going again on the Daphne du Maurier book which has been somewhat neglected due to ill health and appalling weather.

I’ve just come back from a good blowy walk at Trelissick Woodlands - we actually escaped rain again today as well which was a bonus!

Above is the most wonderful picture that my good friend Carol did of Moll (scanning it doesn't n early do it justice). It is entitled MOLL IS NOT AMUSED and is of Moll as Queen Victoria looking really pissed off, which she does sometimes, when Carol’s dog Pilot is being Extremely Bouncy (he’s only a year old). Whenever I look at this I have to laugh - she has captured Moll’s Piss Off expression so perfectly!

So hope you are all ploughing through germs and wintry weather - at least we have daffodils a plenty, crocuses, and rhododendrons out now as well. The evenings are getting lighter, so spring really is on the way…