Book Swaps and other escapes 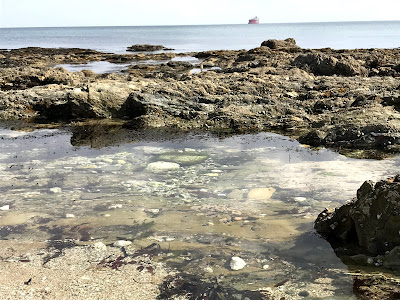 So, where do you go when you want to escape? I don't necessarily mean literally, but in your head?

I've always been an avid reader since the age of four. My parents both read a lot so it was as natural to me as breathing. I've always, also, read too fast. I'd love to be one of those people who savour books, but I can't. If I'm enjoying it, I have to tear through the next page, and the one after that.... and if I'm not enjoying it, I'm afraid I skip bits.

But my appalling reading habits haven't stopped a lifelong love of books. When the libraries announced they were closing for lockdown, I took out ten books, knowing that wouldn't last me long. But to my surprise, I find I've still got a high To Be Read List, healthily enabled by various friends.

Anne texted a few weeks ago to say she'd got Tom's Midnight Garden, a childhood favourite of both of ours and would I like it? YES! I'd told her I was re-reading several childhood books for comfort reading - Susanna of the Mounties being one. Which was just as good as I remember, and beautifully old fashioned, being written in the 1920s. So Anne dropped it round, while walking her dog round the block.

Last week she texted to say she'd got two more for me, so this time I took Moll round there. It's so lovely to actually talk to someone, face to face, albeit from two metres. Cheers my day up no end. This time she lent me Sweet Caress by William Boyd, which I'd read some time ago - the true story of Amory Cade, one of the first women war photographers. It's so well written and useful research for my novel, which features a young photographer. I couldn't put this book down, and as I'm going through a phase of walking at 3/4am for a few hours, it's lovely having something good to read to while away the wee hours.

I'm half way through Tom's Midnight Garden, which I find good for reading at night. it's not overly exciting and beautifully written, full of imagery and time travelling magic. And inscribed by the seven year old Anne, which makes it all the more special.

Corinne lent me several French text books as well as The Making of Us by Lisa Jewell, a fabulous writer whose books I will always read. And Fiona dropped round Girl, Woman, Other by Bernadine Evaristo - another amazing writer.

So, along with another pile of books for my book group, I'm OK for a few weeks. This might not be a big deal for some people but for me not having enough books is like telling a smoker she's run out of fags (I was one, I know how terrifying this is).

So thank you, all my other book loving friends, for enabling my escapism during lockdown. It is much appreciated. 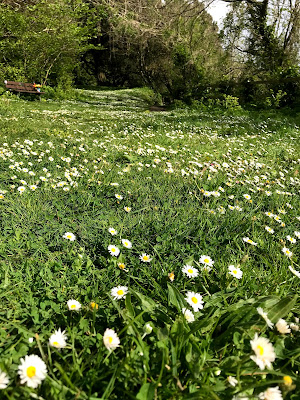 Where's your blog? and Haircuts... 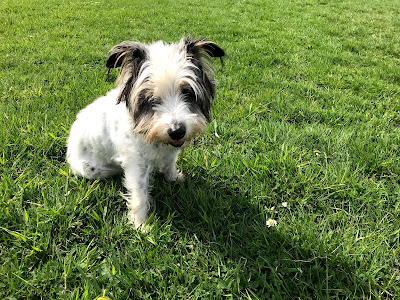 Yesterday I had two chat with real friends. You know - actually seeing them face to face - from a safe distance of at least two metres, of course.

Nowadays, and particularly when you live on your own, such instances are to be treasured. And this blog is due to a sharp reminder from Izz. "Are you OK?" she said, as we walked our dogs along North Parade - at a safe distance. "I haven't seen your blog for ages, and I thought, of my God, what's happened?"

I reassured her that I was OK, but I wasn't really sure what to say. Life ticks on, the days are curiously full - though I have in part my novel to thank for that. I never thought that anorexia would be a welcome release....! I collect the odd prescription, explore new solitary walks, learn French, do my counselling course, talk to friends on the phone, paint and cook.

I am not one of these people who can sit and watch television for long. Thirty minutes is about my limit. I wish I could just get stuck into a good box set, but I do find it very difficult to sit still and concentrate - unless it's my own book of course. So I keep busy.

I am learning new skills. At least, that's going a bit far. I have cut my hair and Moll's, though I have had marginally more success with Moll's than my own. Moll has been terrified of groomers all her life, and she got so stressed that the last groomer (a very mature lady who's been doing it for 30 years), said she didn't think she should do it any more as she was frightened of hurting her. This was about six months ago - maybe longer, so you can imagine how long her coat has been getting.

For Easter she was given some dog treats from Lidls and god knows what are in these but she ADORES them. I mean, she's one of the greediest dogs I've met but these are the heroin of dog treats, if you'll excuse the mixed metaphor. So I thought I'd have a go at cutting her hair. I balanced a bit of one on my knee and snipped away carefully while she shook with anticipated delight at the prospect of this injection of delight. So focused was she that she didn't notice hair going missing.

I repeated this over about a week - which meant that she looked really weird when half of her was cut and the other half not - but we're just about there now. Apart from her bum, and who wants that interfered with? And she looks so much better and lighter in this warmth. Her spots show through and she is, I think, happier. And I'm £30 better off - and it means I can carry on doing it. So that's one bonus out of this strange time.

Like all - or most of us - I miss my friends. I am lucky in HAVING so many friends. I miss daily companionship. I miss cuddles. I miss walks and a coffee with my mates most of all. I try not to cry when others say that they are really rather enjoying this time. I try not to be jealous. I have my Moll. And for the moment, that's just how it is. I am so much luckier than so many. And I try never to forget that. 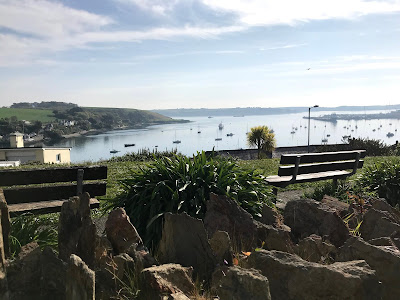 Be careful what you say, and Comfort Reading 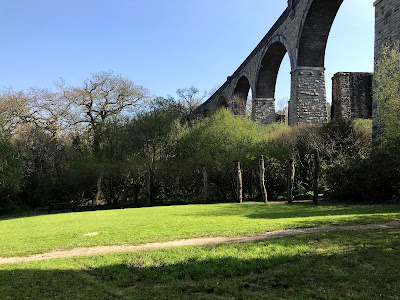 This was taken on a local walk recently - while the world is in uproar, at least nature is putting on the most wonderful display, reassuring us that life does go on, in some fashion, and while it's frustrating (to put it mildly) not being able to go out and explore, to say nothing of writing the book that I'm contracted to write, at least it's cheering to see those blue skies and, in my case, paint my very small back yard.

Several weeks ago I read a piece written by an Italian journalist about what she'd learned from living in lockdown. One of the things I remember her writing was that you will find that some friends aren't who you thought, while the opposite can be true. I had an example of this last week when talking to several friends I've known well for many years, some of whom are married and have family living with them and were saying how lovely it was to all be together, have barbecues, great for the kids to be getting on so well etc etc.

Each word, in that last conversation, felt like a punch in the guts. I pointed out, eventually, that it wasn't so much fun when you're living on your own and don't have a partner, or children. (And for the many, many people who ARE banged up with family and/or a partner they really don't want to be with. For those who have lost their business, who aren't able to pay the rent, bills, and all the other terrible things that people are having to go through.)

My point was entirely lost, and so I ended the conversation feeling bruised, lonely and miserable. And while I am really happy that several of my friends are enjoying this situation - I think that's great - it doesn't make me feel any less lonely and isolated to hear about it. So please, when talking to friends who are less fortunate than you, please be careful. We are all anxious, over sensitive and downright wobbly right now.

To counteract that, providing inspiration on Easter Sunday, The Reunion on BBC Radio Four, featured John McCarthy, Terry Waite, Brian Keenan and Jill Morrell. For those that don't know, the three men were held hostage in Beirut for many years before being released, and I was working at WTN (where John worked) shortly after he was taken hostage, so I knew Jill Morrell and the awful uncertainties she lived through. I would advise anyone to listen to this brilliant piece of radio - it was full of gentle humour, incredible bravery, and showed the deep love and respect they all had for each other. When we're chafing at the bit about lockdown, think about being locked in a cell for four years with no one to talk to, no radio, no books - nothing. As Brian Keenan said, "We belong to an elite club, and Jill is an honorary member" which I thought was such a beautiful thing to say.

And finally, to also counteract these wobbly times, what are you reading? I have been dipping into old childhood favourites of my mother's. Susanna of the Mounties by Muriel Denison - what a joy! Anne of Green Gables by LM Montgomery. I think A Traveller in Time will be next - any other suggestions?

Hope you're keeping well and safe everyone. Take care, please. 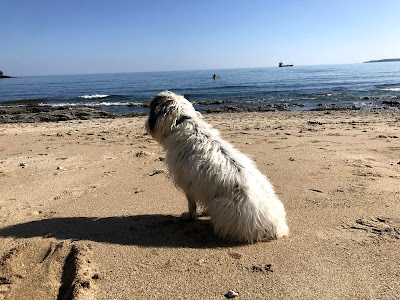 Posted by Flowerpot at 12:31 No comments: