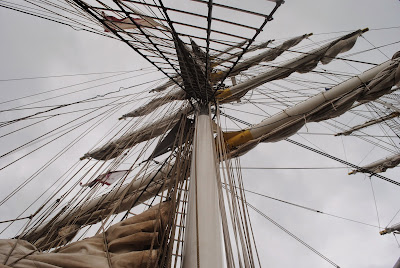 Sadly I was unable to race in Falmouth Week which was a huge disappointment, but weather and my op and my lack of strength were all against me. I'm glad to say we had a lovely sail on Piran last weekend though, and Al will be back soon and we're planning some cruising when he returns.

We just need Mr B's knee to recover (it isn't on its own but he is one of those men that believes that injuries right themselves. I was married to someone who believed that too. No comment. Just don't mention "physician heal thyself" or I will scream).

This is the view looking up the rigging of the Tall Ship Mercedes when we sailed on her last Easter (2013).

Now, Falmouth is gearing itself up for Tall Ships 2014 - let's hope the weather cheers up a bit as the sight of all those magnificent ships in Falmouth Bay is not to be missed. You'll be able to get on board the ships from Thursday to Saturday, then the grand Parade of Sail will be on Sunday from 11 till 2pm before they head off up the coast, up towards Greenwich.

So anyone who's in Cornwall over this coming weekend, head for Falmouth. It is truly the most wonderful sight - even if you don't like boats. You won't be disappointed!

And onto other matters - on Wednesday I have a medical MOT day. Gynae clinic in the morning and an hour's hygienist appointment in the afternoon. Luckily we're having a girls night after that - I'll need it!
Posted by Flowerpot at 16:42 11 comments: 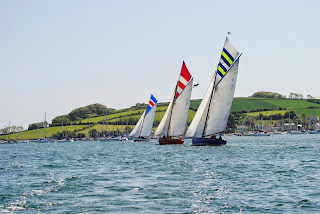 The best laid - or is that made? - plans and all that…

This week is Falmouth Regatta Week which I’ve been looking forward to all year. I even organised my surgery so I could sail this week.

But one way and another it doesn’t look very promising. First of all, Al came down but the boat took longer to get ready than we’d anticipated, and when we finally set off for a sail last Friday, there was no wind.We had to be towed out, then paddle back - this boat has no engine. So that scuppered that. I was so disappointed I cried (quietly, where I hoped Al couldn’t see) so Mr B took me out in Echo instead. Which wasn't the same but better than nothing.

The following day Mr B went out with the others in the boat for a shake down as he knows much more about the technical side of things that I do, so I ground my teeth as I waved them off….

On Sunday, the first day of racing, Bertha hit Cornwall so all racing was cancelled.

Yesterday it was blowing a hoolie and chucking it down with rain so I wasn't sorry not to race and they had a hard time of it and broke a backstay.

That was fixed but today they went out and broke both backstays -lucky the mast stayed up - so once again the boat is being fixed.

I’ve got to the point of being Philosophical now. If I don’t race this year, it’s not the end of the world. It felt like it the other day, looked forward to it for a long time, but like all things, there’s a reason. And you certainly can’t argue with the weather.

The good news is that I had a phone call from a friend I haven’t seen for about 20 years who’s staying down at Mylor. We met up and it was just like old times. We took Moll for a walk and caught up and might even go on holiday together.

Just think, if I’d been racing I might not have seen her. 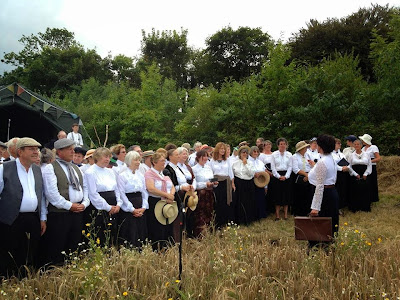 This was us singing in the Field of Loss - the poppy field - at Heligan last Sunday.

Last Friday my dear friend Av and I went to see West Side Story at Plymouth’s Theatre Royal - a most wonderful production with a fabulous cast. Av had organised the whole event brilliantly, so our Travelodge was next door and car park near to that. Even better, we had plenty of eateries nearby so that sorted our food problem. All in all, a wonderful evening, then the next morning we had a guided tour round the theatre which was fascinating - seeing the orchestra pit, going on stage, and the dressing rooms.

Unfortunately my train was cancelled on the way back, then the next train was late, so I got in nearly 2 hours late, which involved endless phone calls mostly to organise Moll being picked up at a different time -but all was sorted.

Then the next day we set off for Mevagissey, then Heligan, to take part in 100: The Day the World Changed. Nearly 80 of us singers, plus a few friends, came along in 3 coaches, and we started off at Mevagissey town quay where the St Austell band played, then the re-enactment of the local men who went to war a hundred years ago, and how their women and children were affected.

It was incredibly moving and it was impossible not to cry at some point in the day - for me when we sang Soldiers Farewell to the impossibly young looking men - boys - who were about to walk off to war, thinking that they’d be home by Christmas.

The re-enactment lasted all day - we sang for a lot of it - to over 5,000 people and ended up in the Field of Loss - a field planted with poppies - as the names of all those who had died in the surrounding parishes were read out.

We walked miles, sang our hearts out, and it really brought home the horrors of what everyone had to live through - and are still doing so for those who have loved ones still fighting.

It was a real privilege to be part of this production, and our thanks go to all those who worked so hard to make it happen. Our wonderful Musical Director, Claire Ingleheart, deserves so many thanks for all her hard work. We are so very proud of her.