A Talk and Dad's Earrings

Our Talk (on Becoming a Freelance Writer) went very well, I'm glad to say. The first 15 minutes were a bit hairy but I got over my nerves and felt a lot better, then actually enjoyed the second half which was a great bonus, and the audience seemed to have a good time too.

I think what made it work was that Fi and I are both unconventional in different ways, and we both work in completely different ways.

She's been to university and trained as a teaching assistant, as well as performing in public a lot so she's not fazed by an audience, and this made me feel a lot better – I knew she would be able to wing it if anything went wrong.

Whereas I have never been to university and apart from a short TV piece several years ago, the last public performance was in Falmouth Theatre's production of Oliver 5 years ago – which I don't think really counts for much as I was in the chorus...

With regard to interviews, Fi says she doesn't plan anything, but lets the interviewee talk as they want, then types up notes in long hand. Whereas I prepare questions, take notes and tape the interview as well - but the end results are the same which is what matters.

I also made notes for the talk – being my first time I knew my brain was likely to seize up without loads of prompts – whereas Fi just ad libbed. But having said that, she had done a very exact running order, down to the last minute, which made all the difference. So a big thank you to Fi for making it all possible.

My mum came, as did Pip and our Penzance cousins (thanks to all of you) and the night before, when Mum and I were having a glass of wine on the sofa, she pointed to her earrings: tiny pearls I don't remember having seen before.

“These were the last earrings your Dad gave me,” she said (though he died 26 years ago). “I thought he should be with us tomorrow for your talk.” 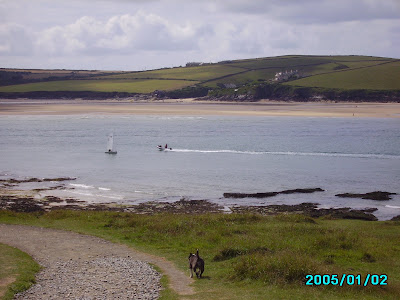 Picture taken with family last week over at Daymer Bay.

I get to see my brothers and their families once a year, usually, if that, so it's typical that they should both be down in Cornwall the same week – though sadly not together. So it's been great to catch up on everyone and hear the nephews and nieces' news.

It struck me – once again - how very different our lives are. I am very happy with ours, but very glad I don't have the financial stresses and strains that they do. Skint but happy is the rule that applies here, but I could see that our comparatively simple way of life baffles them. We don't have children, of course, which makes a big difference but much though I love my brothers, I did feel on a different planet most of the time. (I expect they did too.) Nurture versus Nature and all that....

Work has been suddenly busy which is good, and on Thursday another journalist, Fi Read and I are giving a talk on Becoming a Freelance Writer at the new Penzance Literary Festival. Whether we actually get an audience of more than 10 remains to be seen but I'm telling myself it's good practice. Though for what I'm not sure.

So think of us on Thursday morning – Fi's more experienced at public performance than I am and is very laid back about it. I am counting on her to rescue the day should I make a complete hash of it.....
Posted by Flowerpot at 10:27 20 comments: 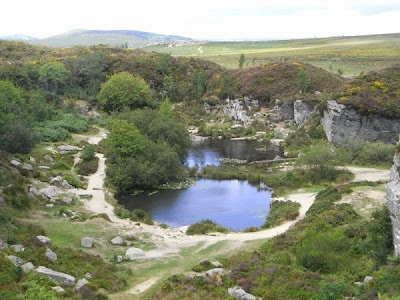 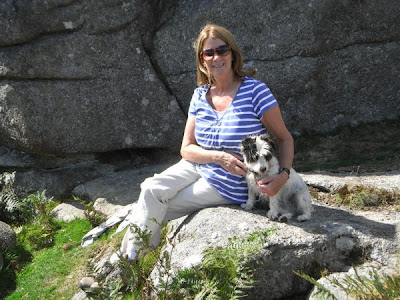 We had a fabulous girls weekend, from the moment we stood on Truro platform waiting for the train – Molls shaking somewhat, as it was only her 2nd train ride. But once she'd jumped aboard the train (like a true pro), she snorted up all available crumbs and settled down at my feet.

Av met us 2 hours later, then we had a great walk at the Water Meadows at Dartington, and sorted the first part of the world out. I cooked that night (roasted vegetables with cheese), washed down with plenty of Sauvignon. Bit of a wakeful night as Molls rushed to the door everytime anyone went to the loo, but all was well.

On Saturday afternoon we went up to Dartmoor and did a circular walk around Haytor, the quarry and Saddle Tor (see pictures above) and it couldn't have been better weather – sunny, breeze and the ground is just right: dry but not too hard. I shall remember that walk for a long time.

That night we called in to say Happy 60th to my friend Annie and had a glass of wine with all of them, then up to the pub for supper. After another long walk on Sunday morning, Molls and I got on the train and came back for a rest.

What a fab weekend – really makes you realise how important good friends are. Cheers, Av! Here's to the next one.

By and large, we are both very happy with our lives, but while we walked, we discussed what we would change if we could.

So that's today's question – if your fairy godmother waved her magic wand, what would would you change about your life?
Posted by Flowerpot at 10:58 16 comments: 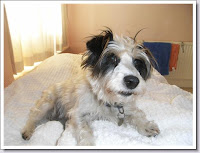 This weekend Molls and I are heading off to have a Girls Weekend with my dear friend, Av, who lives in Dorset. (This is Molls on Av's bed last time we met.) Actually we're meeting in Devon which is halfway and hope to see a few of my friends there and also my mum.

Av and I met when we were both going through big life changes – I;d been made redundant, had washed up in Cornwall but couldn't find any work there, so went on to Devon, with a very small measure of confidence and self worth.

Av's marriage had just ended and she was having to work (other than running her ex-husband's business) for the first time in her life. So despite a 10 year age gap (she's a bit older than me) we clicked and have remained steadfast friends ever since.

While I love my husband dearly, it's good to have some time away from each other and taking Molls means we can have some even better walks while we're away. Molls was very taken with Av last time we met – so much so that I began to doubt whether she really wanted to come home with me at all. But as Av's husband is direly allergic to anything with fur, that rather put paid to any notions she (Molls) might have had about swapping mothers.

Secondly - Japanese bloggers. I welcome any (suitable) comments, but given that this blog is written in English, please, if you are going to comment, could you do so in English. If the comments are not suitable, please refrain.

And lastly - I've been doing some more author interviews recently and have been asked to think about male writers.

So today's question is – what male writers would you like to see interviewed?
Posted by Flowerpot at 15:08 23 comments: