Book Launch, Rewriting the Past and Mum visit 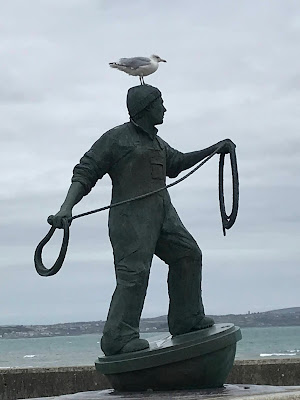 This is Tom Leaper's fabulous statue dedicated to all the fishermen from Newlyn who lost their lives at sea. We walked down here last Saturday after my cousin Jenny Dearlove's launch of her wonderful book "Women to the Rescue, A Penzance refuge for Girls in Trouble". It was a fascinating talk and discussion afterwards, and the book is well worth a read for anyone, Cornish or not, exposing just how hard it was for girls who "got into trouble" in those days, and a stark reminder of how narrow society's views were.

To continue the literary theme, the editor I consulted over my most recent novel suggested I start it in a different place. As the first part of the book is mostly autobiographical, it means rewriting history and she wasn't sure how I felt about it. She suggested that my late husband should die at home (in the book) rather than in hospital and it's actually been very therapeutic - though I've cried a lot - so it could not only improve my novel but help me too.

I'd long ago arranged to do a day trip up and back to see my mum last Monday. But the day before, I had a text from my brother to say that there was a case of covid in Mum's care home, so all visits were suspended for the moment. She's been so down recently, with a couple of infections, that I felt it would be too awful to postpone this visit, so I asked if we could stand outside and talk to her through the window, and the staff said yes.

It was a long journey - five hours of driving to see Mum for 20 minutes - but to see her face light up was fabulous. To our great relief, her eyes were bright and her skin was a good colour so we hope she's getting better at last. I'm going up again in a couple of weeks so will be able to see more of her then - covid allowing.

In the meantime, I leave you with a picture from our first pitstop on our way up to see Mum. Enlarge the picture to see the writing underneath. Good old Trago..... 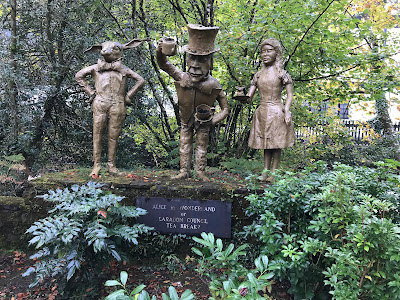 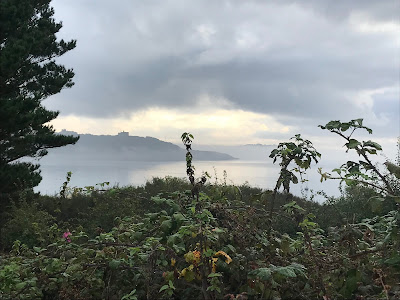 My talk at the weekend was a fringe event as part of the Falmouth Book Festival. It went very well, courtesy of the utterly brilliant BBC's Daphne Skinnard who is a very clever interviewer, and my friends Sam and Dave Pentin who run the Terrace Gallery in Penryn - a small but excellent place for small events. It was quite a novel experience (pardon the pun) being interviewed by someone rather than the opposite way round, and it's always interesting seeing what other people make of you.

To start with she said, "you have had a rich and varied life" - which is usually a polite way of saying that I never stuck at any one job. By my advanced years, however, this turns me into someone Interesting. Worth interviewing and writing about. Funny that - it's only when you're virtually unemployable that this becomes an asset rather than a liability.

But I digress. As I haven't written another walks book for a while and therefore haven't had a book launch for a few years (covid notwithstanding), I'd almost forgotten that I've written five books. It was heartwarming to see them all sitting there on the table next to me. My little family. And to hear that people were actually impressed by them was very good for my confidence.

All in all we had a lot of laughs, shed some tears (me) and I sold some books and had interesting talks with the audience afterwards. Which was fantastic and made it all worth doing. Who knows, maybe this time next year I will be talking about my soon to be published novel - that would be even better.

The downer to life at the mment is that my poor Mum isn't well. She's had a run of things recently - she fell and broke her shoulder, though that's finally healed. But she has been plagued by small infections which have combined to make her feel rotten poor thing, so I am shooting up there on Monday - we're only allowed to visit for 30 minutes - with a friend who I hope will be able to drive as I find driving incredibly tiring. If not she can talk to me to keep me awake.

It's been a few months since I've seen Mum so it will be lovely to see her and give her a hug if we're allowed. I'm going up again to see her mid November and then in December, so she will be fed up of seeing me by then, but at least will make up for any absences. She's so brave and stalwart; a real credit - so it's horrible seeing her struggle. Growing old really isn't for sissies. 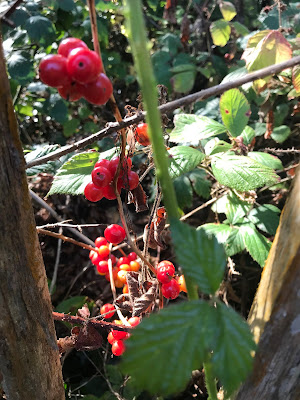 A Talk! For the first time in nearly two years..... 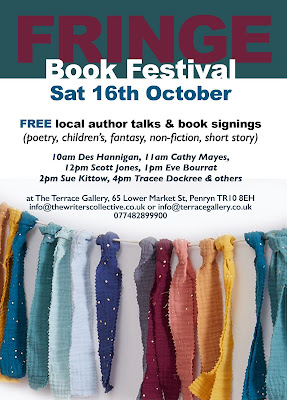 As you can see, this coming Saturday I am giving a talk as part of the fringe events of the new Falmouth Festival. I am going to be talking to BBC Radio Cornwall's Daphne Skinnard, about how I came to write walks and how that led to my walks books and from then on to my novels.

I don't mind speaking in public, though it's always easier when it's in front of strangers rather than people you know. So far, I have some loyal friends coming to give me moral support and that's definitely more nerve racking! Especially as the last talk I gave was early March last year, so I'm a bit out of practice.

Anyway, I am looking forward to it - though I will be very nervous on Saturday! - and hope that this first Falmouth Book Festival goes on to become a regular event.

Talking of which, I had a fabulous Zoom meeting with my editor yesterday. It's always good to put a face to a name and as I'd sent her two pages of notes on her three page critique, we were well prepared. (As ex-journalists, we have a fair amount in common). So after our brainstorming, I now know how to go about doing what I've got to do, she gave me loads of useful information and said to keep her posted and she's there if I need her - well, you couldn't ask for more, could you? So that was immensely cheering.

And many thanks to all the comments about our dogs. I don't think they actively dislike each other - I think it's more that because of lockdown, Lainy isn't used to sharing her home space with another dog. I realised that they hadn't had a spat for six weeks, so it can't all be bad. I know I am more conscientious than most but then Lainy is my responsibility....

Hoping that everone is enjoying this fabulous weather. This was my view walking Lainy this morning. 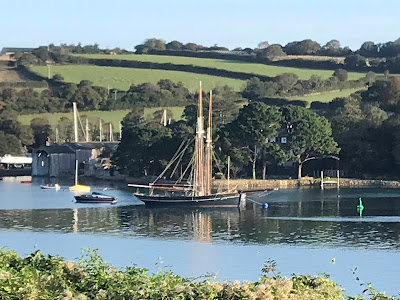 Posted by Flowerpot at 11:16 No comments:

Getting to Know You and Cheering News 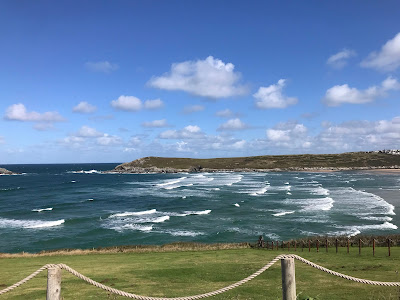 First my good news. The book I've just written is from a dog's point of view - Moll's to be precise. It almost wrote itself, because Moll was such a strong character, and I laughed and cried as I wrote it. Or she did.

But because it's very different from other books on the market, I wasn't sure if it was marketable, and if so, which agents/publishers to approach, so I asked a freelance editor to have a look at it and give me advice on how to go forward.

Her report landed in my inbox on Monday morning and she really likes it. She said some amazing things about it - every time I read it, I think - is she really talking about MY book? HOORAY!!! And I can't wait to start working on it with her next week.

This news cheered me up, because of a canine scrap at the end of last week. Which is similar to those of you with children/grandchildren who don't get on.

We don't like everyone we meet, and just because we like our friends, doesn't mean that we necessarily like THEIR friends. The same can be true of dogs.

Moll pretty much ignored other dogs - she was very self contained and in her own world, which meant there would be the odd snap but otherwise no conflict. Although we didn't often have other dogs in our flat because it's small, and this can be the difference. Dogs, like people, can walk together happily enough, but put them in a house for a while and if one dog sniffs another bowl, for instance, this can develop into an incident.

This happened last week with my fella's dog, and I felt terrible. I love his dog, who is the polar opposite of Lainy in temperament and doesn't fight back - just as well. Lainy can be unpredictable, and she's very fast, but looking back on it, I can see the triggers. I was appalled that Lainy might have hurt his dog - I was responsible, after all. But as M said, "We just need to plan it better, make sure it doesn't escalate" - for planning is the secret to avoiding any future disagreements.

I did everything wrong over the weekend - I worried desperately, felt really guilty, was terrified it would happen again. Though I have done a lot of planning for our next meeting, and am trying to take his advice, not worry, and make sure that we don't get future scraps. It's more upsetting for us than them, I think.

So the motto of this episode is Don't Panic Mr Mainwaring! Keep calm, watch our dogs carefully, distract them when necessary, and in my case, carry on writing.... 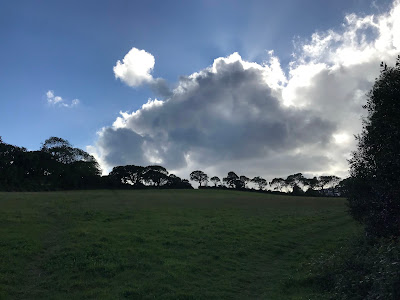