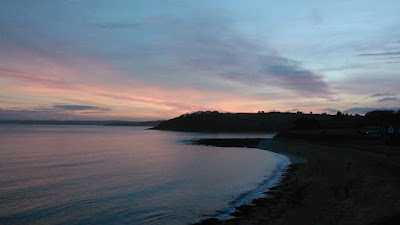 This was sunset at Gylly beach last weekend...

Apologies for silence - time seems to go faster and faster at the moment, and suddenly here it is nearly at the end of 2017, which hasn’t been the easiest of years, but at least has (so far) been devoid of any health scares, losing anyone close to me, or other disasters. Though listening to the news, it’s happening to plenty of other people. And, being Victor Meldrew about it, there are still another 10 days or so to go before the end of the year…!

I am writing this with a slight fuzzy head. A dear friend who has been working in the Med on a superyacht is back and treated me to a drink last night. Then Al came along and bought us another one which was a mistake. I was all right till that last one.… Being small and light, despite eating a lot, I can’t take a lot of booze, but it was a lovely evening. And I slept very well. So that was my Christmas party….

On the plus side, while work has been slow, it has picked up a bit for the end of the year, and my Walks in the Footsteps of Poldark books has been selling well, as have the other books. Moll is snoring on the bed behind me, and she is such a joy in my life. I am fortunate in loving and being loved, albeit in an unconventional fashion. I have wonderful friends who I treasure. I have a roof over my head and I have enough to eat.

And while I have all of this, I still find this a tricky time of year. Last week we had our bring and share Singing lunch, which was great. I then decided to walk Moll along the creek at Mylor, as she’d been sitting in the van waiting for me. This was the walk I did six years ago when the hospital had told me that Pip had two days to live.

Curiously, it was a joyful walk. The sun shone, the air was clear and crisp, and while I couldn’t comprehend a life without my husband, I was glad that at least his suffering was coming to an end. Watching someone go through what he went through was like wandering into someone else’s nightmare, and being unable to get out. So it also meant an end to watching him decline. And I felt so grateful for having had 15 years with this lovely, very special man.

So I set off along the creek with Moll last Thursday all set to enjoy my walk. And it felt all wrong. The sky was grey and mild. It was incredibly muddy so my boots got lagged and it was difficult to walk. Then we came to a field of very unfriendly looking cattle plus bull. I retraced my steps, thought I would then climb up the fields and take the higher path back. Having struggle over more mud lagged fields, the path was nowhere to be seen, but I could hear a farmer shooting in the distance, and rather be his target, we scuttled back down the hill.

And all around me were the ghosts of Christmas past, clamouring for attention. I felt exhausted by the time I got home, from dealing with all these old memories, most of which are difficult ones, dealing with loss. But I met up with a dear friend who cheered me up no end.

A lot of people don’t do what they would choose at Christmas, but that is also part of this time of year. I hope that this time next year things will be different. But in the meantime my mum will be happy that I’m coming up, and that counts for a lot.

So here’s wishing you a happy, healthy, creative and profitable 2017. And to making friends with old ghosts. 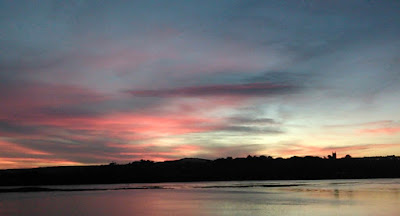 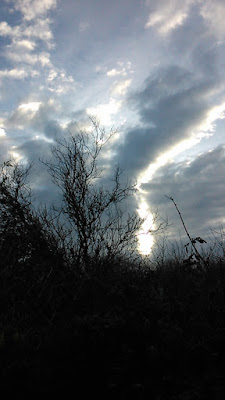 We've had some amazing skies over the last week - well, until the weekend storms which nearly saw the boat in pieces. Very frightening, standing on the pontoon on Saturday night, while it bucked like a broncho, and I was convinced the boat would break its lines and land on top of me. Thankfully it is still there, untouched, so all is well.

On Saturday night I drove through torrential gales to Mylor to our Mix, where various people gather to share food and drink, and perform various numbers. Paul Haines first started this and it's a great way to get confidence performing in front of others - the first time I sang I was so nervous I thought I would either lose my voice or fall over, my legs were shaking so much. Now, once the obligatory nerves are over, I love it!

On Saturday I had a lovely walk near the St Day area - we ended up in Unity Woods (what a terrific name) which were still carpeted with yellow, orange and red leaves, and made our way up to Wheal Busy. I just love the names in Cornwall, and to explore a relatively unknown part of this area is a real treat. Even if it's not going in a book or magazine!

Tomorrow i have an interview with CHBN radio which is broadcast from Treliske Hospital in Truro - almost a year since my last one with them. But hopefully it will spread the Poldark word! Then the following Friday, 16th December, I'm doing a walk with Walk Kernow, from the Poldark book, at Charlestown - at 10.30 am so do come along if you can.

This Sunday, weather permitting, I'm doing another walk for the book at Tywardreath - or maybe Lanlivery, we'll see. Wherever we go, it's always a pleasure to share the day with friends - and Moll gets an extra long walk as well of course, so we're all happy.....