The above is us singing Gaudete at Truro Cathedral last week with many thanks to Tina Wheeler.

This has been one of the most exhausting – and fun – run-ups to Christmas I have ever had. Not that much of it has had anything to do with Christmas itself, other than the singing, and for that I am grateful.

The gigs have been brilliant – the acoustics at Truro Cathedral were incredible, ditto Tremough, and singing in the Mediterranean biome at Eden was quite an experience. The last two days we’ve sung at Trelissick gardens round the courtyard fire, near the donkeys, and then I’ve gone on and had drinks or dinner with friends. Yes, I’ve been burning the candle at both ends and I don’t apologise for that.

I shall be glad when Christmas is over, but I am aiming to go for a walk on the beach with Molls and a friend who is also not looking forward to Christmas. Then I go to Sheila and Richard, who frequently look after Mollie for me, for a meal early evening. Boxing Day – the day Pip died – I’m walking with my friend Andrea, and hope to see my brother in law in the evening.

This last year has been a huge emotional rollercoaster, to use that old cliché. There are times when I wonder if I dreamt the 14 years we had together, for my life has changed so much in the past year.

But next year brings my first walks book out in June, together with all the associated publicity and talks etc., and I’ve just received the draft contract for another walks book for 2013 which is very exciting. I need to work on the novel and send that off, and there are the walks for Cornwall Today. So workwise I have a lot to look forward to. There is also my singing which has proved a wonderful source of strength and friendship, and I am so grateful for the fabulous friends I have made.

It would be lovely to think that perhaps 2013 might bring happiness of another kind without too many complications. But perhaps that's too much to ask for. Who knows?
Posted by Flowerpot at 11:08 20 comments: 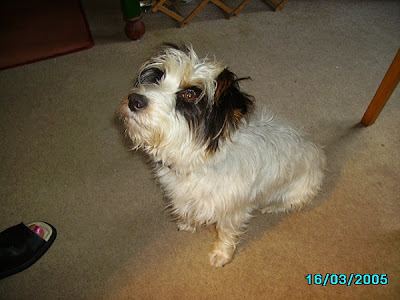 Molls hasn't featured here for a while, and of course is a very important part of my life, so I felt she should make an appearance.

Last weekend I met my dear friend Av in Devon and we stayed with my mum, taking her to the pub on Friday night and Christmas shopping and walking on the Saturday.
Av and I go back a long way and it’s wonderful to catch up with the news and have a good cheer up.

She headed back to Dorset full of Christmas festivities whereas my run up to Christmas is a musical one (though I must remember to get some presents).

Tonight we sing at Truro cathedral, then at Tremough university’s new Performance Centre on Friday evening, then another gig at the Eden Project on Saturday. (And a quick gig on Saturday lunchtime).

Oh, and two more next Monday and Tuesday. So I will either be hoarse by this time next week or unable to stop singing, which is more likely. Either way I will be pretty tired but in a pleasant way.

Last year Christmas passed me by and I was unable to do any of the gigs for obvious reasons, but this year I am more than making up for it, and it’s wonderful to have the freedom to do it, and with such a lovely bunch of people.

Our musical director, Claire Ingleheart, is an incredibly talented musician but also a teacher who manages to get the best out of everyone and inspires us all. Music has played such a big part in my life this year and given me a huge amount of strength.

So think of me, as you curl up in front of the fire with that glass of mulled wine. I will be singing my heart out, and no doubt collapse into bed with music ringing in my ears.
Posted by Flowerpot at 09:47 12 comments: 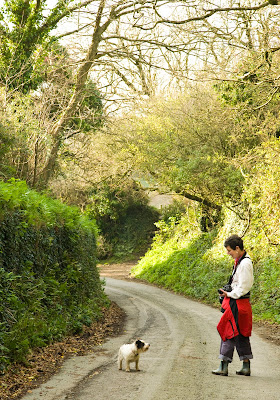 The above was taken by my mate Sally on our Boscastle walk a few weeks ago - a lovely day. Thanks Sally!

Last Thursday was one hell of a day, but we got to the awards for 6.30 having changed in the pub over the road. I have to say I was not at my best. My throat was so sore I could hardly swallow, let alone talk, I felt shattered, and all I really wanted to do was crawl into bed. But I had a glass of wine, made myself talk to some of the other shortlisters and one of the judges, then the awards began.

I didn’t win, but got £100 for being shortlisted, and right afterwards another of the judges came up and said how much she’d loved my novel – she wanted to know what happened in the end, and she adored Mungo (AKA Mollie). “Please don’t give up,” she said. “One of the other shortlisted people last year sent hers in and got it published, so you must do the same.”

That was such a boost, I can’t tell you. So I went and talked to the MD who asked me to send my novel in next year when I’ve finished the editing process. So that’s a real incentive, and in fact next summer is going to be busy with promoting the walks book in June and July – book signings and talks etc., so this could be better timing.

Afterwards I talked to Elaine, Luke Bitmead’s mother who has had a terrible time since Luke died. Last December Pip was so ill it was the worst time of my life, and while I try not to dwell on that, it’s obviously in my thoughts. My experience has been nothing like Elaine’s, but it was still good to compare notes about loss and how to move on.

Afterwards, Emma and I went to the pub (a Wetherspoons, which I frequent in Falmouth, so it was like home from home). Coming back with drinks, wearing my new jacket, I got a tap on the shoulder. Turning round, I saw a young man (late 20s?) who smiled and said, “I like your coat,” before disappearing in the crowds. I was stunned, and looked at Emma. “He’s old enough to be my SON!” I said.

“That’s your Pulling Coat,” she replied with a grin.

After a few drinks we headed back to Paddington where we got on the sleeper which looked rather romantic, sitting at the station. Until we got inside and we realised just how tiny the berths are.

“Maybe not so romantic,” I said, having been involved with men who are mostly 6 foot or over. “Unless you’re very small and very thin.”

Later, I lay curled up in my berth thinking of those who’d helped make the day such a good one. A good luck phone call from a friend while I was at Truro station, lots of texts on the train, Emma’s fabulous encouragement and support throughout the day, and the new contacts I made at the awards.

This morning I walked Molls along a deserted beach where the tide was out. Seagulls squawked and fought over grubs in one corner of the sea, the wind whipped my face and the sky was a bluey grey, with storm clouds gathering over Stack Point.

I thought of an email I was sent recently, entitled “Keep your friends close”. It doesn’t take much time to text, email or phone just to let friends know I'm thinking of them. So that’s what I try and do.
Posted by Flowerpot at 09:24 19 comments: