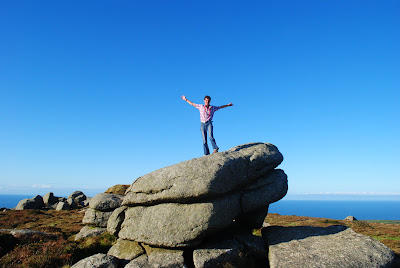 This is a singing blog today, because tomorrow I am taking part in a workshop with the Pearl of Africa Children’s Choir. There are about 20 members of the Choir which was founded in 1983, and they’re here from September to November touring all over England raising funds for schools and homes run by the Molly and Paul Child Care Foundation. This is a Ugandan non-government organisation which provides education, food, shelter and healthcare to orphaned and destitute children in the Kampala and Massaka Districts. They have an amazing itinerary, with an appearance at the Eden Project and the Respect Festival in Plymouth, as well as an appearance on BBC Spotlight.

Later, they are giving a performance on the King Harry Ferry, with those who have been to the workshop joining in. At least, that’s the plan – given the weather forecast I’m not sure whether an alternative venue has been booked.

The other big singing item is this weekend when a member of our choir has booked several houses at Prussia Cove for several days of singing, music making, eating and drinking, walking – whatever we feel like doing, with a knees up on Saturday night when anyone can perform – songs, music, poetry, stories, plays, madness – who knows?

There will be about 50 of us staying in a selection of several houses and we all take food and wine etc. Even better, Mollie’s allowed to come. So by the end of the weekend I will be all sung out. And much the happier for it.
Posted by Flowerpot at 09:42 12 comments: 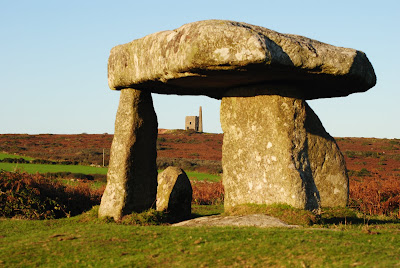 On Sunday I arranged to go down to Zennor with a friend, something we’d been wanting to do for months but never quite came about.

Planning a day out, for me, needs careful preparation as I need to eat regularly or my blood sugar level crashes. So the glove compartment of the van is stacked with cereal bars. We started with cooked breakfast at Sainsbury’s - for those of you who are interested, I had cheese and mushroom omelette with hash browns and baked beans. Then we went to a car boot where I got a whole wardrobe of very good quality stuff for £5. Very satisfying indeed. And the sun came out.

After that we headed down to Zennor and en route I realised it was time for ginger cake from Stones Bakery at the bottom of the High Street in Falmouth - deliciously light and moist.

By the time we reached Zennor the sky was a clear blue and the sun beat down like a hot summer’s day - as we sat outside the pub with a glass of wine and crisps I could feel my arms burning. (Note – Mollie thoroughly approves of outings to the pub as she loves crisps. In fact she loves anything edible.)

Having refreshed ourselves we had a quick look at the Mermaid's Chair in Zennor church, then set off to find Zennor Quoit. The lady in the pub gave us directions but we didn’t quite manage it as I’d left the OS map on my kitchen table, but we found Lanyon Quoit later (after more cake) and I managed to take some pictures – see above.

We then returned via Marazion and a scamper along the beach, and as we drove back, with the sun setting, we both felt as if we'd had a mini holiday. Which I suppose we had. Back home it was time to feed the animals and then time for me to eat again - fishcakes with chips and salad.

Cornwall is beautiful in all weathers, to my mind, but given the weather we had on Sunday it transformed it into a really magical place. We were so lucky to have that last day of summer and thanks to Pip's camera, the photos will keep me going through the cold, grey days of winter.

What will you use to keep you going through winter?
Posted by Flowerpot at 10:06 14 comments: 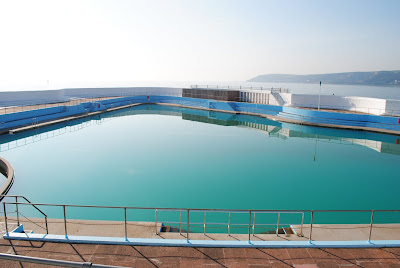 This is the Jubilee Pool in Penzance which sadly was shut when we got there. But I couldn't resist taking some pictures.

Absence due to a holiday in Penzance which was much needed, though I could have done with another week to be honest. The first weekend two close friends came down with me and we made the most of that glorious hot weather, swimming at Marazion, walking over to Lamorna from Mousehole and attending various pubs.

They left on the Sunday night and my mum arrived on the Monday morning. We were invited to our cousins for supper on the Monday night, had a lovely day together on Tuesday and I put her on the train on Tuesday afternoon. Wednesday morning my dear friend Viv and her dog Titch arrived and the rest of the week was a lot of fun. Which isn’t to say that the first part wasn’t, she says hastily. But Viv is very easy.

It was lovely having a few days to unwind, walk the dogs, potter about Penzance and have someone to cook for – though Viv’s lovely partner Paul bought us wine and a takeaway the first night. We did several walks for Cornwall Today, got lost (as we always do) and laughed a lot (as we always do).

But the first friend is coming out of his period of reclusion and talking again, my friend’s husband is improving and my third friend has had loads of tests and they can’t find anything wrong.

Phew. But you can see why I wanted another week’s holiday.

In the meantime, I was sent this wonderful caption this morning. “Before you diagnose yourself with depression or low self-esteem make sure you are not, in fact, just surrounded by arseholes.”