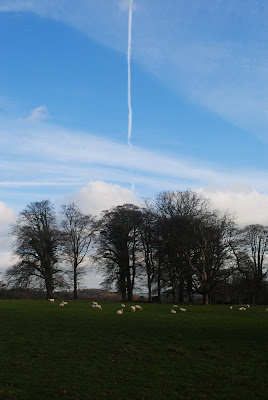 I recently wrote a piece for Your Dog magazine about how walking had changed my life – getting me out and about, making new friends, and helping me deal with Pip’s death. The editor then asked if I could send in one of my walks as well, which I did.
By the way, it’s in the February issue – out now. See Page 95.

Then I had an email from another member of staff from the magazine asking if I’d like to review some dog friendly accommodation in Devon. I pointed out that I was in Cornwall, not Devon but where was it?

To cut a long story short (stop rambling, FP), this weekend Viv, Titch, Mollie and I are going to the Mill End Hotel – a gorgeous looking country house hotel on Dartmoor. In exchange for me writing a detailed review and taking pictures, the hotel are providing bed and breakfast for Friday and Saturday nights. Also, it looks like the ground floor rooms have doors opening out onto the garden which means we don’t have to get up at some ungodly hour to let the dogs out for a wee in the morning. (Us dog owners have to think about such practicalities.)

Looking at the dinner menu, which is way beyond our price range, I think it will be chips in the pub down the road for us. It will be a lovely break, though, and Mum is coming over on Saturday so we can see her as well.

I have said to the magazine that I am happy to review accommodation for their next dog friendly publication next year (more freebies??). Then Viv said, “can’t you get some restaurant reviews, Sue?”

There’s no pleasing some people.
Posted by Flowerpot at 10:41 21 comments: 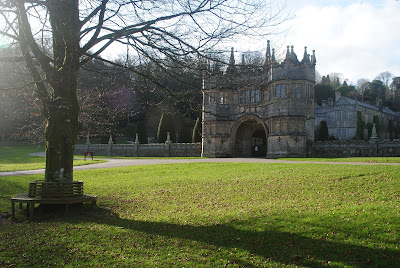 I was at Lanhydrock (above) on Sunday taking pictures for a walk, while trying to fight off a vile cold– along with most of Falmouth. As a result of said lurgy I’ve actually had a run of nights in which has been something of a pleasant novelty given my life recently. It struck me that the second part of last year was rather like having a second adolescence (not bad at 53) – given a sudden new lease of life I felt duty bound to grab it with both hands and make the most of every second.

Now that initial rush has passed, I’m finding that because my life is very busy – filled with very pleasant things I hasten to add – I do need time to myself. So I shan’t be going out every night (she says….). There was something very comforting about coming back from a good day out, lighting the fire and making a Thai curry while I went through the next box of hankies.

Looking back, it’s incredible how my life has changed. But I am very fortunate. I have some very special friends, a gorgeous dog, my singing life and work – and on that front, I have agreed a contract for another walks book to do with Cornish writers. Having talked to the publishers, we are all very excited about it – so that will be coming out in 2013. I have to get rid of this cold, get walking and get writing.

A little voice in the background says – what will go wrong? Life doesn’t go this smoothly. And I guess there’s plenty that could go wrong. But I’m not going to worry about it until it does. In the meantime I shall look forward to the good things and enjoy the others that come along. 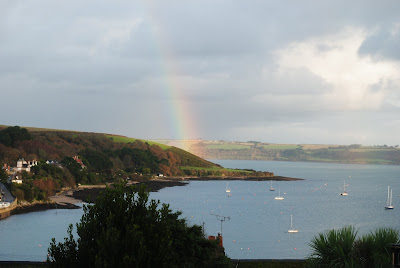 On Christmas Eve a much loved member of Falmouth society died. Barrington, as he was known, was the landlord of the Seven Stars pub (Pip’s local for many a year) but was also a priest, though he wasn’t ordained until he was in his 60s.

Barrington’s famous scowl and heavy eyebrows were featured in the Beano courtesy of another Seven Stars regular, Nick Brennan, a very talented cartoonist who has worked for the Beano (amongst many others) for years.

Nick caught his stance perfectly – all of us locals have been subjected to Barrington’s Glare at times, but also, if any of us were in trouble, we could always go to Barrington for help and advice. “Come to the back bar,” he would say, and we could sit there and pour out our woes. He was also adamant about his likes and dislikes - he refused to have mobile phones in the pub and to warn customers, he spiked a phone and hung it up on the wall.

Dear Barrington was a good friend to me – and to many others, though he did have a soft spot for me. One summer evening when I hadn’t known Pip for long, Barrington confided that he'd got a new car. We went outside to look at it. “Want a spin?” he said.

I agreed, hopped in and was taken for a drive by Barrington. When we arrived back at the pub, everyone was intrigued as to where we’d gone. Except my husband, who was onto his third pint and busy talking….

Barrington’s funeral was a wonderfully grand and curiously happy affair – a Requiem Mass at Truro cathedral last Friday with at least 500 people attending plus Bishop Bill, the current Bishop and many other dignitaries. Barrington had written the service out himself and would have loved it. Everyone sang their hearts out, and the wake afterwards, held in the Seven of course, went on for hours. 7 barrels of beer were drunk and they actually ran out. Which gives you some idea of dear Barrington’s popularity.

As a friend said to me at the service, “Trust Barrington to die on Christmas Eve. He’ll know that from now on it’ll be known as Barrington’s Eve.” And so it should be.

Here’s to you, Barrington. To a good and true friend.
Posted by Flowerpot at 10:16 10 comments: 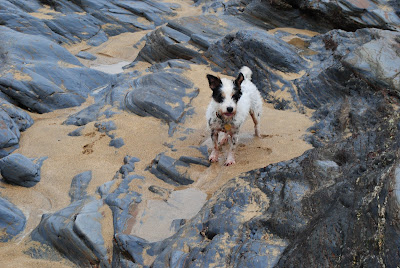 First of all a very happy new year to everyone. My Christmas/New Year festivities went much better than expected – in fact Christmas Day was one of the best I’ve had for a long while, and you can see Mollie enjoying the beach on Christmas Day. But Pip and I never celebrated it anyway so I had little to miss.

Several days after Christmas I headed up to London (don’t mention the train journey from hell) to meet some friends and see the Leonardo Da Vinci exhibition. Courtesy of the rail service I was over an hour late and made the 7pm ticket deadline with a minute to spare (wiping sweat from brow) and very glad I did, despite being knackered. It really is a once in a lifetime experience and despite being hot and crowded, worth every minute of the 2 hours we spent there.

We then went for a drink in Covent Garden, before heading back to Surrey to spend the night with Deb’s mum. Next day we spent some time with her before heading back into London and exploring old haunts and then the long trek home. A 5 hour journey seems to take forever when you’re tired, but I got second wind on receiving a text from a friend to say that some friends were doing a gig at our local pub. No wonder I’m tired now.

On New Year’s Day evening I went to the Cornish shout at a pub near Redruth which was terrific. Everyone seemed to be suffering new year blues and a good sing among friends was a fantastic way to cheer ourselves up. Since then I’ve met several other friends, all feeling down. There can be so much pressure at this time of year to be having an amazing time – or think that everyone else is having an amazing time – when many people aren’t.

But I hope 2012 brings all my friends – cyber and real – happiness, love, peace, fun, productivity/creativity and good health. And whatever else you may desire.
Posted by Flowerpot at 11:06 24 comments: