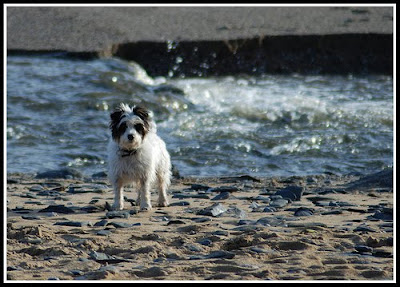 I've been tagged by Becky for 10 things about me.

Well, after much scratching of head, here they are:-

2. Husband also has lots of nicknames.

3. Both my parents are from good Cornish families but I was born in London.

7. My Dad was called John; one of my brothers is Jonathan and I married a Jonathan. Come to think of it, I've had several boyfriends called John along the years, as well.

8. If I get stressed or upset, I have trouble sleeping. And eating for that matter.

9. My father died when I was in my early 20s and my husband is old enough to be my father. Shrinks would LOVE that one.....

10. And last but not least, I am teaching Moll to swim. Actually, she can swim but she is actually coming swimming with me now. Go, girl!
(Picture of Molls taken by Claire Wilson)
Posted by Flowerpot at 17:11 19 comments:

Summer Solstice and on 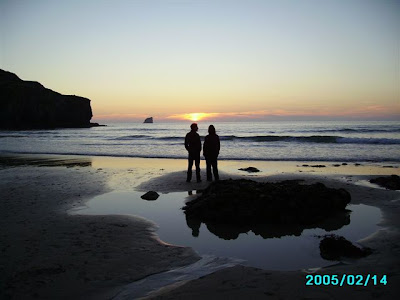 On Monday we decided to take advantage of this glorious weather and headed over to St Agnes to see the sun go down for the summer solstice. As you can see, it did us proud: this is two of my friends having a quiet moment, watching the last of the sun's rays disappear. It really was very special and I was glad that for once I had the camera.

On Sunday we had a picnic over at Polly Joke on the north coast, one of our favourite places, and had to get home in time to go and see Fisherman's Friends. On the way back, we passed a lonely young figure plodding along the road (no pavements) and stopped to give him a lift.

It turned out the poor fellow had been camping in Newquay, been for a swim that morning and had his phone and money stolen. Further more, he had just started working at a fish and chip shop and was supposed to be there by 12 noon – when we picked him up it was already nearly 2pm and of course he couldn't contact them as he'd had his phone taken.

We went home via Truro (not exactly on our way but we couldn't let the poor fellow be even later) and headed off to see Fisherman's Friends. A great gathering at the sea shanty festival and hundreds of people enjoying the good weather. We topped that off with a drink in the pub on the way home, and had a mighty fine day.

Yesterday I said goodbye to the editor of Cornwall Today going on maternity leave and met the new editor. Then Molls and I went down to Helford and I had my first swim of the year.

A few weeks ago it was our anniversary, and our plans were rather disrupted by meeting up with some Australian cousins that afternoon. Himself bought himself and Rob a pint, and when that was finished, Rob (Aussie cousin) eyed my husband. “You drink port?” he said.

“Of course,” said Himself, as if he drank it regularly. (Last time was 4 years ago.)

Rob came back with two huge schooners of port, and having downed his, Himself looked quite rosy and declared he was going to drive home.

“No way,” I said grabbing the keys.

I held onto the keys and ignored him. On the way home he said, “Let's go and have a meal out to celebrate, Pop.” Then he said, “I'll pay.” That's when I knew he wasn't sober.

To be honest I'm not that fussed because a) it's expensive b) we usually have disappointing food c) Himself is a very good cook and c) I don't actually like eating out much. I get nervous with those hovering waiters and never know what to choose. But I knew he wanted to go, and was touched that he'd asked.

“That would be nice,” I said. And then came the problem of trying to decide where to go. We decided against our local pub, so I suggested the bar at the marina.

“No,” he said, “they've gone all modern with those square potatoes.” (Small pause while I choked with laughter at the idea of those poor spuds.) “I don't like food that's been F***ed around with, Pop.”

And that rather set the tone for the evening. We did go out in the end, but the wine was like vinegar, the portions were far too big which we both found offputting, and sitting opposite us were two of the hugest women I have ever seen (25 stone plus at a guess), eating their way through platefuls and platefuls of food.

As sung by the immortal David Bowie (for those of you young enough not to have grown up with his music) – changes are afoot here.

Firstly the result of Himself's coughing appears to have been by the drugs he's been taking for his prostate cancer. Oh, great. So he's been told to come off those straight away and have a month to clear his system before they put him on something else for the cancer.

I really hope to god it does help his breathing. It's exhausting, frustrating and debilitating for him to cough all the time, and for me it's incredibly difficult living with a cough like that that threatens to take over our lives. So fingers crossed on that one.

The second thing is that Kirstie Newton, the editor of Cornwall Today, goes on maternity leave at the end of this month, and Alex Wade, a highly respected journalist and writer, takes over the reins as acting editor over the next year. While I will miss Kirstie, I'm looking forward to working with Alex who sounds a fascinating character.

Thirdly, for any of you feeling a bit down, or in need of a change – try singing. I don't belong to a choir – that's a bit formal to describe us – but we are called The Suitcase Singers, and sing every Thursday for a couple of hours. The more I sing with Claire Ingleheart, our musical director, the more I enjoy it.

Last Saturday we had a gig in Flushing in the evening. Claire had done a workshop that afternoon with over 20 people and many of them stayed on for the gig. From there we went to the pub, relaxed with a drink for half an hour, and started singing again, sitting outside the pub.

It was a real example of singing crossing all kinds of boundaries. We sing a-capella (without music), and Claire chose several rounds that are easy for bystanders to learn but sound fabulous. We had a stag party that joined in (as she said, that could have gone either way but they joined in and had a wonderful time) and everyone who was in the pub came out and joined us, and gradually doors opened in the village and more and more people came to listen and join in.

It was a night I shall never forget. Hearing the melodies rise out over the sea, watching faces light up with the pure joy of the music, and a lightened atmosphere of sheer enjoyment. Claire is not only an incredibly talented musician, she is a great leader and knows how to manage large groups of people, which is vital in these instances.

It really was a night with a touch of pure magic.
Posted by Flowerpot at 11:53 30 comments: 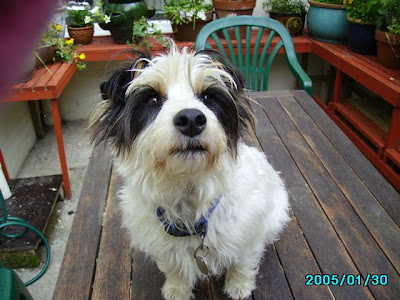 Himself has been busy working on the flat here, so Molls and I have just got back from a few days looking after my poor mum who's been having a bad time with a poorly leg and far too many antibiotics. She's had a bad leg for weeks now and has had to cancel one holiday so is desperate to go on a cruise next week. So here's hoping she really enjoys it – she deserves a good break.

While it was lovely to see her – and in such wonderful weather – Mollie had a wonderful time, from the moment we got on the train when the conductor made a beeline for her, saying how much he preferred dogs to humans (“they don't smash up my train, they're not sick all over the place and they don't get drunk”) - from then on her fan club grew daily.

Like any royal subject, she bestowed humour and great affection on her subjects and behaved very properly when out – in the pub, on the train or in other people's houses. She's not always so well behaved but this week she did us proud. She also met my dear friend Av again and they are now Best Buddies, with Mollie bouncing on her bed when I took a cup of tea in that morning. Mollie looked at me with that sideways look as if to say - "don't need you any more. I've got Av now." But as it's Av, I've forgiven her.

She's also been given some new dog food to try – Burgess . There are lots of different varieties, but she's got the Beef Casserole version which is reputed to have all the vitamins and minerals that a dog needs. She certainly loves it – you serve it (in a *porcelain dish of course) with hot water so it forms a very scrummy smelling gravy and she wolfs it down – though it has to be said she's never been fussy.

She's only been eating it for a week or so but has definitely given it the paws up so far. And as she's been given a huge sack of it, she has about a year's worth of beef casserole to enjoy. And talking of food - Himself has just presented me with a plate of home made apple tea cake. Now that is perfection itself!

(*I was kidding about the porcelain dish, though Himself has been known to serve tuna to the cat in a glass dish.)
Posted by Flowerpot at 11:13 24 comments: