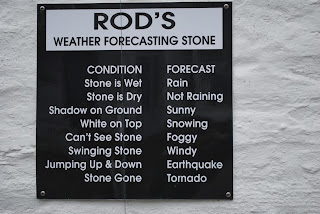 We saw this in Port Isaac, on the way back from a dog review weekend, and had to take a picture... which has absolutely nothing to do with this post but I thought might cheer us up on this day of storms and lashing rain...

Having been anorexic for years, I now have gum disease which was undetected for a while courtesy of a NHS dentist, which has meant having to lose some of my teeth. But I was unprepared for being quite so upset over these teeth…

A few days ago, I went to the dentist to have a tooth out. He inspected it carefully, then the one next to it, and said, very gently, that really both should come out, “though I’m not sure if you can manage that.”

I wasn’t sure whether he meant psychologically or financially, but he explained that if I didn’t have the second one out now, it would have to come out in January, by which time it could be causing me trouble. He then talked about possible dentures or implants, and as he talked I could feel the tears dribbling down my cheeks. Actually what I really wanted was a good howl, but that’s a bit tricky in front of the dentist.

He stopped, poor man, and said, “I’m really sorry to have upset you, Sue,” I was, too, but he was only doing his job, poor fellow. So I took a deep breath, had visions of toothache over Christmas and said, “OK. Take them both out.”

He tipped me back in the chair, and both he and the nurse carefully dried my tears as he injected anaesthetic, then asked if my boat was out of the water. Well, sailing is always guaranteed to cheer me up – and him, so soon the deed was done. Afterwards, I felt desperately bereft, and sobbed onto the steering wheel.

Talking to several friends later, they both pointed out that they’re always upset over losing teeth – “they’re part of us, and our life,” one said, “as well as how we look.” The other one said, “and you’re bound to be wobbly if Mr B’s just left, so it’s not surprising.”

But it got me thinking, what did these teeth represent? I’d always had Good Teeth, but gradually, over the years, they’d become loose so I couldn’t chew on that side. But I didn’t want to lose them – they’re at the back so you can’t really see them, but I was still scared. It was a long standing part of me. And let’s face it – teeth are one of the first things we notice about people.

And it made me think of how my teeth were very like a relationship that has gone wrong. Or a job that is so stressful it makes you ill (like most of us, I’ve had both). We hang onto the situation for ages, because it’s too much hassle to change it or end it, or there’s no other job out there, or we’re frightened, or it’s going to hurt too much, or we don’t want to let the other person or our colleagues down. For all those reasons and more, we sometimes hang on to situations that are doing us no favours at all.

As I left yesterday, my dentist handed me another tissue and smiled. “You’ve done the right thing, Sue,” he said. “Your mouth will soon feel much better.”

When Mr B rang to ask how I was, I said, “I feel as if my jaw’s been attacked with a crowbar,” but the next day, although I felt sore, exhausted and weepy, and there was a huge hole in my mouth, I had a sense of relief. I was going through all those wretched grief feelings, but like ending that toxic relationship or chucking in the job that’s making you ill, I know I am better off without those teeth.

So this Christmas/New Year, I am going to have a good think about the rest of my life. What am I not happy with? What changes do I need to make, and how could I do that?

Wishing you all a happy Christmas. And if you aren’t where you wish to be, let’s hope you are next year.

A visit to a superyacht 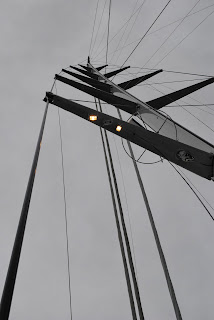 On Saturday Mr B and I had an early Christmas present – a visit to M5, one of the world’s biggest superyachts, and the one with the tallest mast in the world (see picture).

She’s been sitting in Falmouth Docks for several months now, having a refit with Pendennis Shipyard, and every time I look out of the window, I see her 89 metre mast towering over the docks.

We’d had a few trips in Echo to visit her – she’s 75.2 metres long and is incredibly sleek, majestic and utterly beautiful. But the thought of actually stepping on board was another thing altogether.

So on Saturday we headed down to the docks and met the captain on board. He showed us around, introducing us to “the second largest furler in the world”. So which is the biggest, we asked? He laughed and pointed to the bow. “There!”

When he asked us where we kept the sails on our boat, we didn’t like to say that Piran is a 12 foot fibreglass dinghy so we keep the sails on the mast. Instead we looked down into this huge room below decks that was purely for M5’s sails.

The engine room was also jaw dropping – could have been the size of Apollo’s – with the most amazing technology involved, and the bridge was also out of this world. This superyacht cost US$ 50 million to build, and the refit must be adding another few million to the bill.

It was an unforgettable privilege to go on board her, and I intend to be waving her off when she finally leaves. As Mr B said, this reflects another level of wealth. One that we couldn’t begin to comprehend.

So he bought me some chips on the way back.

Jill Murphy and the Worst Witch 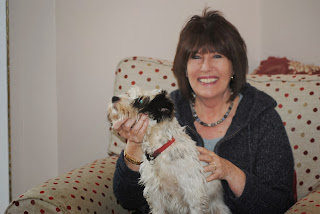 Apologies for silence – I've had a stinking cold which is lingering, and life has been busier than usual. Last week saw me heading up to North Cornwall to interview the lovely Jill Murphy, author of the fabulous Worst Witch series – and she’s just written a seventh book entitled The Worst Witch and the Wishing Star.

I interviewed Jill three years ago when she had two deerhounds and had just written a book entitled Dear Hound as well as another of her wonderful picture books. This time she was talking about writing a series for children and, sadly, both of her dogs were no more. The last one broke her leg and had to be put down two weeks ago so Jill was less than her normal exuberant self.

But she is the most generous of hostesses and made me coffee while we admired her cats. Then she asked if I’d like to get Moll from the van. Moll of course was in like a flash, and spent the next few hours sitting happily on Jill’s lap. A good bit of canine therapy for Jill and a nice bit of spoiling for Moll.

She then made me lunch and even suggested Mol could lick my plate afterwards (there’s a real dog lover for you). And we sat by the fire growing far too comfortable until I had to heave myself off the sofa and head for a walk before home.

Not having children, I’d missed Jill’s books but they are a real delight with the most wonderful illustrations that only she could do. Her books are full of warmth, fun and humour and would make the most wonderful present for any child – or adult for that matter. Go and check her out. You won’t be disappointed.