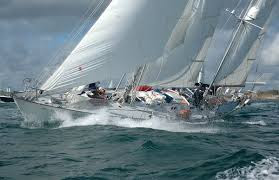 Last week I was fortunate enough to meet the owner of Gipsy Moth IV, the yacht that Sir Francis Chichester sailed single handed round the world in 1966/7. He apparently had no attachment to the boat and declared he was glad to be rid of her after his voyage, so the poor girl stayed in Greenwich, alongside the Cutty Sark, for nearly 40 years before she was saved from rotting by a campaign led by Yachting Monthly.

She was advertised for sale on the front of the Sunday Times in September 2010 and saved from being sent abroad, meaning that she will stay in this country and sailed in British waters, as a reminder of the incredible challenges that Chichester overcame, and an inspiration to generations past and present.

It was a fascinating interview (and a very good lunch, too) and of course Moll came with me – as chaperone. Pip was one of many inspired by Chichester’s voyage – he was 64 when he set off from Plymouth – which serves as a good reminder to us all that It’s Never Too Late, if that’s what you want to do.

Not that I want to sail round the world, but we are going out for a sail on Gipsy Moth IV tomorrow and I will write about it in my next column. Can’t wait!

Thrown in at the deep end 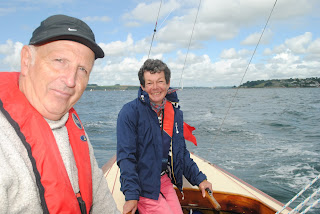 When Alan (see above, the owner of Snap, the beautiful Dragon classic boat), asked if Mr B and I would crew for him in Falmouth (Regatta) Week, I said Yes! with absolutely no idea of what I was letting myself in for.

Mr B has considerable experience in the past, but my experience comes from dinghy sailing over 40 years ago and a bit of sailing with Pip which didn’t amount to much because, as soon as we moved in together, he proceeded to rip the boat apart to refurbish her.

So basically I turned up for the first day of racing (luckily Mr B was crewing that day) with no idea what to expect. I left, shaken and trembling. I'd thrown myself into a largely male environment of very experienced sailors (our helmsman, Keith, has sailed the Fastnet Race several times). And of course I was going to be expected to keep up.

Looking back, it was incredibly generous of them to let me have a go at all. I was so terrified I couldn’t eat or sleep, just wondered what the hell I had let myself in for and I was terrified of letting them down. Mr B gave me a lot of practical advice gleaned from his first day, but my stomach still lurches thinking about that first trip. So, I was sailing on a strange boat with strange men, having no experience. Everyone else knew their boats, their crew and the stretch of river where we were sailing – ie. where all the buoys are.

To explain briefly a little of what’s involved in racing: you sail out to where the race boat is and about half an hour before the race is due to begin, the course is hung over the edge of the boat. You have to make a note of all the buoys then chart the course, including finding the start line. This is a lot harder than it sounds, as all the other boats are thrashing around the race boat trying to do the same thing, and it’s not easy to read the course when you’re flying past at speed. Also, when you don’t know which buoy is which and where, it’s not easy to chart the course. All of this is done at high speed and under pressure, as the skipper needs to know where to be for the start, which is usually in about 5minutes. So, no pressure then.

From then on, apart from the physical sailing – ie, tacking and gybing, balancing the boat out (sitting right out on the side when we heeled over), tightening the backstays when we tacked etc., it’s vital to keep an eagle eye out for other boats to avoid collisions, have the next buoy in mind so you know where exactly where we’re going and can tell the skipper, and checking the sails. Well, that’s just some of what’s involved as crew.

But on the second day, I began to get the hang of it. I thought, OK I’ve got SO much to learn, but I love this. I love reacting really quickly, I like being treated as an honorary bloke and I don’t mind being shouted at because in racing it’s essential that everyone moves and reacts really quickly.

We came second that day (first the day before, but that was before the handicaps are taken into account), and I was so relieved that I hadn’t let the others down, I nearly burst into tears. I am very fortunate in sailing with Alan, the owner, who, along with his wife have become very good friends, and Keith, who taught me so much in two short days. When I gave him a hug he grinned broadly and said, “Sue, it was a privilege.” Which nearly made me cry all over again.

So last week was an emotional and physical rollercoaster. I am covered in bruises from being thrown about the boat when it was very windy but I don’t care (though several people thought Mr B had been whacking me. He hasn’t.) I got us all t shirts with SNAP written on the front, and Alan was so delighted he hasn't taken his off since.... The men had several races and Bonded well so the plan is to do it all again next August, by which time I am determined to be a much better sailor.

And, of course, to keep on writing about it.

Half hour of fame 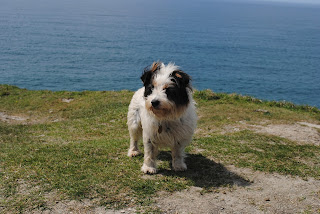 Last Thursday was a Bit Of A Day, as they say. In the morning I had a meeting about being sailing correspondent for Cornwall Today, and we planned the first six months to include a monthly column and a piece on boats, mostly by me but some are in the bag. That was very exciting and we’re both really looking forward to it.

I left there feeling drained, to various texts of encouragement, and shot home, ate vast amounts of food and had a lie down. Luckily the Radio Cornwall presenter was delayed as she was filming elsewhere, so I had a bit of time to collect myself and Moll and drove off to Carn Marth.

There I discovered that the representatives from the Carn Marth Trust were all friends from another of Claire’s choirs, and Miranda, who I’d been emailing, was a member of a barbershop choir that we both sang in years ago. And we all had dogs – in fact we ended up with Millie, Mollie and Miranda.

I really enjoyed the broadcast, though there were a couple of moments when I knew Mr B would be creasing himself. The first was when I was asked what the trig point was for. Now, I knew Mr B had told me something about this some time ago but could I remember it? I couldn’t really ask to dial a friend, 771 feet above sea level, with a microphone thrust in my face, so I muttered something about it being to do with measurements for OS maps. (Where are men when you need them, eh?)
Alan said I sounded very knowledgeable but I think he was probably being kind.

The next one was when I had to describe the view. Mr B well knows that I have no sense of direction. We were walking Moll on the cliffs at Bude once when I pointed to the cliffs in front of us. “Where’s that?” I said. “Is it Plymouth?”
He turned to me in astonishment. “PLYMOUTH?” he cried. “That’s on the opposite coast, and miles away.” We looked at each other, then started laughing till the tears ran down our faces. Since then Plymouth has become a byword….

So that was my half hour of fame which I thoroughly enjoyed. Shame about the sense of direction, but you can’t have everything in life.

Oh, and I heard I've been shortlisted for a worldwide poetry competition. MY!!!

Next week is Falmouth Regatta Week which means crewing in races. I am excited and terrified in equal measures.