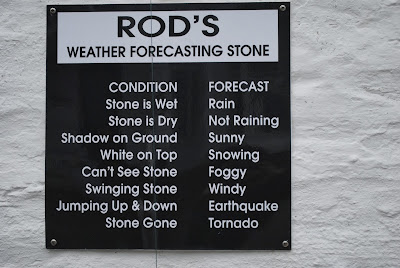 We saw this above weather forecasting tool in Port Isaac a few weekends ago. Would save the government millions, doubtless.....

The singing weekend at Prussia Cove was great, if exhausting, and didnt get off to a good start when I had to swerve to avoid a stroppy driver outside Mr B's house and dented another bloke's bumper. Just waiting to hear what the damage on that one is. Second, my friend Joe was feeding Bussie and I gota phone call on Saturday morning to say that I'd left the key inside the french doors so Joe couldn't get his key in. Dear fellow, he went down to Tesco to get some cat food and left a plate outside which His Lordship scoffed and didn't seem unduly put out. And lastly, as troubles come in threes, the toilet in the house we were staying in broke. 7 people and no toilet is not a good idea but thankfully it was fixed by Saturday evening.

But we had some great singing, some good food and a good time was had by all. I was so tired by the time I came back that I crashed. And from then on it's been all go with another author interview - Rupert Wallis, whose debut novel comes out in January.

Then Alan (of 'Snap' fame) arrives tonight for a few days so it will be lovely to see him again and take him out in Echo - weather permitting.
Posted by Flowerpot at 17:29 14 comments: 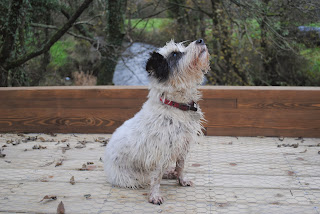 This is Moll taken last weekend when we reviewed the lovely Helsbury Park near Camelford. Not that she's a poser or anything....

This time last year three of us formed a breakaway group from our choir which we ended up calling the Hipflasks. Since then we’ve rehearsed on many an afternoon and evening, and forged a close bond between the three of us. Good friends are so valuable but good ones that sing must be even better.

Once a year Paul organises a singing weekend at Prussia Cove, where the International Music Festival, and other musical events, take place. It’s a big rambling house that can sleep 25 people and the surrounding cottages absorb the rest of us – last year there were 65 of us who gather to share food, wine, dogs and music for the weekend. We have four workshops which are always a joy to attend, we meet new people and always have a fabulous – if exhausting – time.

I'm off on Friday - six of us are sharing the Lodge as we did last year and all really looking forward to it. As we sang in a round last week, “Make new friends and cherish the old. Some are silver and some are gold.” 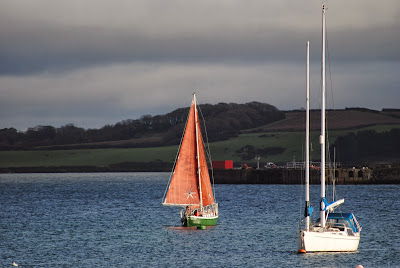 Further to my last post, it turned out that Andrew did leave Pendennis last Monday 4th November but because the weather forecast was bad, he picked up a mooring near the Greenbank hotel.

I got an email from his wife to say he was hoping to leave around midday on Monday 11th, so at 11.45 I legged it down to Greenbank pier with my camera. No sign of the sail covers being removed, so I hung around for a while, had a text from Alyson, his wife, and then thought I’d nip up and borrow Mr B’s telescope.

We watched out of his window for a while then I thought I’d better go home as I could just see the sail covers from my front window. Nearly two hours later, I looked out of the window – and the mainsail was being hoisted! I texted Mr B and ran down the hill once more with camera. Got to Greenbank Gardens and saw Andrew on board, making final preparations. I sent another text to Mr B saying, “We are watching history in the making.”

Then the jib was hoisted, and Elsi Arrub sped forwards. I was so excited, and so emotional by this time, clicking away at pictures as fast as I could, wishing we’d had some notice so we could have gone out in Echo to take better pictures and given him a good send off.

As it was, I jumped up and down and waved, shouting, “Good luck Andrew!”. He looked over, saw me and waved back. And then he was off, tacking towards the docks, and just then the sun came out and lit the sails like a blessing.

Andrew’s wife rang then so I told her he was off with a good enough wind to set him on his way (he has no engine so wind is crucial!) and headed back up to see Mr B. “I was emotional too,” he said, “and I haven’t even met the guy. That’s some undertaking.”

Andrew’s hoping to return to Falmouth next December and I’m determined to get out on the water to take some great pictures of his triumphant return. 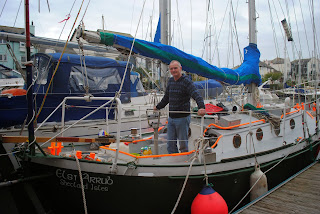