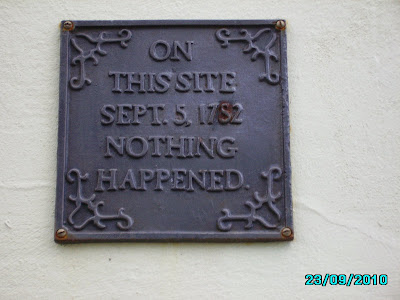 Life continues to be full of ups and downs. On the upside, I had a fascinating interview behind the scenes at Truro Cathedral last week where I met the Head of Music there, three Head Choristers and one of the gap year choral scholars.

I felt very privileged indeed to talk to them all: they share a profound love of music that is very uplifting, and hearing the boys rehearse brought tears to my eyes. Even better, I have been offered tickets to the carol service at Christmas and will take my mum who is over the moon.

The down was that Himself, who'd been doing so much better, suddenly had a relapse and went down with another high fever. Luckily I got the emergency doc out on Sat morning and he gave more and stronger antibiotics – it's another lung infection. The poor patient is back in bed feeling incredibly weak and miserable but after another home visit yesterday, the doc said that the infection seems to have gone, so hopefully once he's finished the anitibiotics, he will start to feel much better.

He needs feeding up but has no appetite so Nurse Flowerpot is standing over the poor fellow saying,” Eat this!” I'm not quite that bad, but a dear friend who is a fabulous cook offered to cook whatever he wanted and bring it round (she knows my lack of vision in the culinary department). Himself smiled when I told him this and he said, “ooh, cottage pie catches my imagination,” so I put an order in for that. So thanks Izzy!

Her partner is also recovering from being very poorly, so we are both doing nursing duties. Himself's eyes lit up when he thought of Izzy in a nurse's uniform. Didn't do his heart much good but it sure as hell cheered him up.
Posted by Flowerpot at 12:18 18 comments: 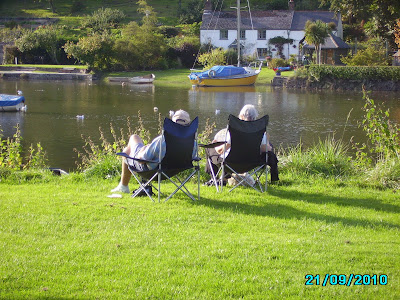 This was also taken in Lerryn - I couldn't resist it.

Many thanks for all your kind thoughts from last week. I am glad to report that, first and foremost, the patient is up and about again, albeit a bit weak and wobbly, but much recovered.

Secondly, following your comments and those of other friends, I've written a letter of complaint to said doc about his highly unhelpful comments. As a physician I have no truck with him – it's just when he opened his mouth that time, and unfortunately the two tend to go together.

I have the utmost respect and compassion for anyone who is a carer and/or has a sick partner or member of the family. I really don't know how they keep going, long term, except that I suppose you do if you have to. I only did two weeks of it but that was more than enough. That sick terror in the base of my stomach, the long dark nights of fear, wondering what was going to happen – or rather, when. Whereas now I feel as if I've come out of a long tunnel and seen sunlight at the other end.

On a lighter note, work has come up with some very varied jobs. This afternoon I'm off to Truro cathedral to interview the head chorister, one of the student choristers and one of the lay vicars. Then next week I am interviewing an author of historical thrillers, and on Friday off to see a wildlife animal sanctuary. It won't make me rich but it's so varied and love meeting so many different people. And animals are an even better bonus.

Lastly, I saw the most wonderful sight this morning. Imagine - the sun dazzling as it rose above the sea when I walked Molls on the beach, and silhouetted against the bright sun was a boy and his dog on a paddleboard.

(I'm kicking myself I didn't have the camera but I'm sure you can imagine in.)
Posted by Flowerpot at 09:57 18 comments: 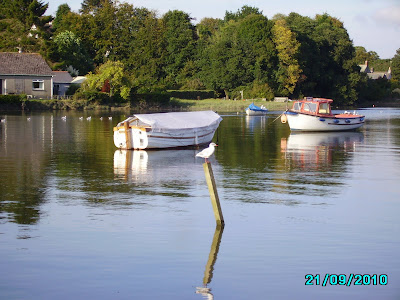 “In the back of my mind I'm thinking the cancer might have spread to your ribs,” the doctor said chattily, as if we were discussing the weather. “But I think it's more likely it's pleurisy.”

These comments came on a house visit on Monday, when I'd had about 2 hours sleep the night before, had to drive to Truro to do an interview, then raced home to be in time for the doctor. As you can imagine, his words didn't exactly provide the wisdom and comfort I had hoped and provoked a wonderful email from my sister in law entitled "Madder than Spit".

(The another picture above is of Lerryn, designed to calm all troubled thoughts, particularly Shelagh's.)

It's been a bit of a week for poor Himself who has suffered high fevers and then thought he'd broken a rib he was in such agony (this could be the pleurisy). But at least the antibiotics have kicked in and so have the heavy duty painkillers. When Himself woke up yesterday looking and sounding a bit better, I was so relieved I burst into tears over my toast. And last night I had the best night's sleep for a long while.

On the day that the Chilean miners were released, my husband decided he might get out of bed later. For someone who has never gone to bed when ill, a week in bed is quite something, but he's still too weak to do much more than doze. I think it could be another week in bed actually, but at least he looks much better and is no longer in pain so fingers crossed.

The last week has been hell, but has shown me several things. Firstly, how much my husband means to me. We don't actually have much in common but we do share a sense of humour and we have a steady companionship which means so much. In the dark hours of the night, when I thought this was the beginning of the end, it was the companionship that I realised I would miss the most.

Secondly, I have the most amazing friends. You know who you are so thank you so much for your love and support. It means the world.

Thirdly (the list could go on but I won't bore you), thank god for my job and for lovely Holly Young, milliner and great talent, who unwittingly kept me from turning into a weeping, terrified wreck on Monday because of our interview.

Lastly, I think we'd both forgotten what a lousy cook I am.
Posted by Flowerpot at 11:00 28 comments: 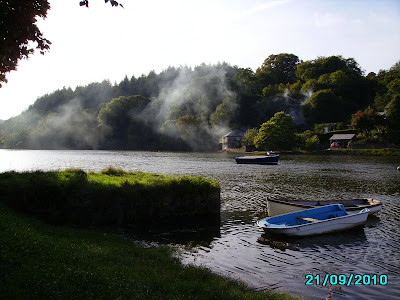 Another picture of Fowey - actually Lerryn - as requested by Ellee.

A week of not being at home much due to doing a magazine walk on Monday over at Penwith. A day of rare and glorious autumn sunshine and a very, very muddy walk. “I have to say, this walk is very interesting, but very inadvisable,” Viv said half way round. “I can't believe how un-muddy you are. Were you a goat in a former life?”

That excursion took most of the day as we had to pick up something in Truro on the way home, and today I was supposed to go up to the wilds of St Mabyn to interview an author for another magazine. Unfortunately poor Himself had a flu jab yesterday and has been running a high fever – freezing cold then boiling hot and shaking - since yesterday afternoon. Not much sleep had by yours truly so I will have to rearrange the interview or do it over the phone. I don't want to leave sick husband for 5 hours (which is what the round trip would take).

Talking of poor husband - while in Fowey I decided to do a wash and use their tumble dryer as there was nowhere to hang washing up. I've never used a tumble dryer before, so the drying process was somewhat hit and miss, and all the clothes came out with creases ironed in. Worse than that, Himself only owns two pairs of trousers and the ones I washed – and dried – have lost the will to live. They now hang, lifeless and permanently creased, like a tearful apology. Which I'm afraid he didn't get from me, bearing in mind that defence is the best form of attack.

However, he looked almost as sorry as the poor trousers, wearing them, so I towed him off to Asda and had to buy him another pair. These are Very Smart (his words) and he decided to wear them to the pub last Friday. The next day, he realised that he'd forgotten to give them their first airing.