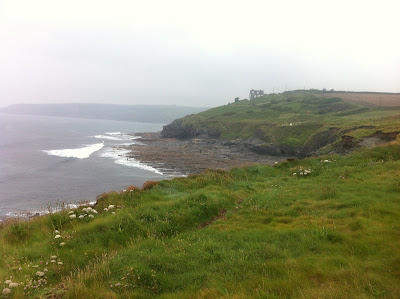 I know I've written a lot about confidence, but it does make such a difference, doesn't it?

For the last few months I've enjoyed a wave of much needed confidence - in part inspired by a) regular, promptly paid research work (the promptly paid bit being a welcome rarity, as all freelancers know) and b) being in the wonderful creative flow of writing a novel again.

Well, once I finished the first draft of the novel, all that creative flow stopped. And it was as if my confidence dried up with it. All of a sudden I was stricken by terrible doubts, most of which amounted to the fact that this will never be published. I've written other novels in the past which haven't been published (though I did get shortlisted for the first three chapters for the last one). But we all know what it's like when the Confidence Gremlins creep in, and have a riot. Party time! They cry, running round, dragging every insecurity out and drenching it in doom till they lie, waterlogged and lifeless, like beached seaweed.

Of course being ill can be another reason for losing confidence, or losing a loved one, be that a four legged one or a two legged one. Reading reviews on Amazon I know has set many a writer off into a chronic wobble. DON'T DO IT!!

So what do we do? Well, I felt terrible for a week or two culminating in last weekend when, not helped by the fact that poor Mr B is feeling wretched, I had convinced myself that everything was DIRE. My energy levels were so low I could hardly get out of bed, let alone walk Moll, and I had lost the desire to write or do anything much except curl up in a ball and stay in bed.

But I felt it would do me a good to get a sense of place for where my novel is set (which had been lacking), so on Sunday afternoon we set off and despite the rain, had a good recce where I took enough photos to give me an idea of the setting. We then had a drink in the Blue Anchor on the way home, which is such a friendly pub, where all the locals look as if they've stepped off the pages of a Dickens novel.

Fingernail by fingernail I am clawing back. I have started editing the novel (first edit, long way to go) but by little steps we can all make enough progress to keep going. Baby steps..... 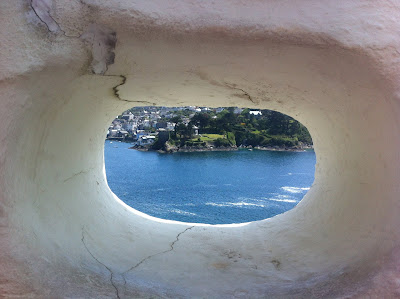 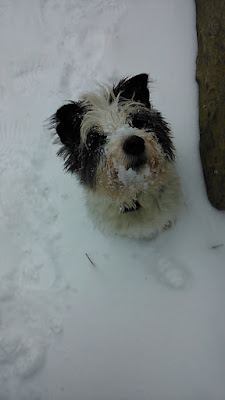 To do this in reverse order, I had to take Moll to the vet yesterday and learned that while her heart medication is working, so her heart's working brilliantly again, she can't see much at all now - the vet shone a light into her eyes and couldn't see the back at all as her cataracts are bad now. I was so upset, and stood there with tears dribbling down my cheeks, but the lovely vet reassured me that dogs manage incredibly well without much sight, if any.

And for Moll, this isn't a sudden thing - she's presumably been losing her sight for years now as the cataracts have been there for a while. She isn't bothered, and therefore nor should we. And my lovely girl is still bouncing around like a good 'un, bless her.

So much so that yesterday we had another new walk out near Porkellis. The footpath was boggy so we ended up doing mountain goat impressions over a lot of it and then Mr B stopped, suddenly, looked at the ground. It was covered in what he thought were ants. But on second glance, they were millions of tiny wee frogs. Coming to a pond nearby, we noticed the black blogs all round the edges - these were the frogs just hatching (or whatever they do).

It was quite the most wondrous thing to see - millions and millions of these tiny little fellas, jumping around like nobody's business - their first entrance into this world. (Sorry no picture as they were too small and so well camouflaged you couldn't see them in a picture. So here's my amazing hanging basket instead.) 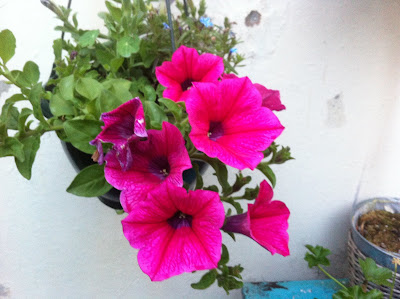 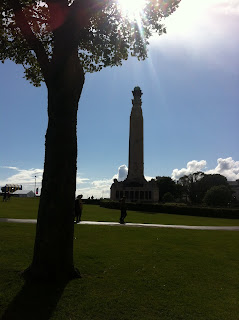 Last weekend I ventured over the border - yes! - to Plymouth for the night to see Matthew Bourne's new ballet of Romeo and Juliet. As ever with MB, expect the unexpected, which not everyone likes. (This is the man who brought us the male Swan Lake, among many other different takes on classic stories.)

So of course R&J was going to be different. Av and I loved it - the sets are always excellent, but this was very stark and black and white which underlined the severity of the unusual setting - a psychiatric unit. The inmates wore white, the jailor (or equivalent) wore black, had tattoos and was very fond of the bottle. The dancing was amazing and the young lovers' passion was wonderful. And the music was all live, played with a 15 piece orchestra in the pit, as opposed to a 40 or 50 piece orchestra - and still sounded amazing.

As for the ending - well, as with most of Shakespeare, don't expect a rose tinted happy ending. In the original, I believe, Juliet takes enough poison to send her to sleep, Romeo finds her, believes she's dead and polishes off the rest of the poison. Juliet awakes, finds him dead and stabs herself.

In MB's version it's slightly different (no spoilers) and when I posted on Facebook, someone said they thought it was a shame about the use of knives, given the current stabbings.

So, what do you think? Would you tamper with the ending of a Shakespeare play and remove the stabbing? Would that really make a difference to the kind of people who tend to go and see ballet anyway? I would be very interested to know...

And lastly, this was seen on the fence near to our B&B. Looks like someone had a really good night out.... 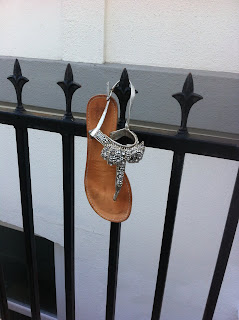 Posted by Flowerpot at 13:50 No comments: 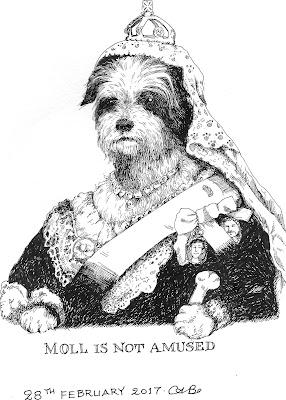 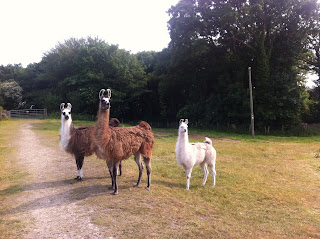 Posted by Flowerpot at 16:40 No comments:

Flowerpot
I am a novelist, freelance researcher and journalist with a Diploma with Distinction for Freelance and Feature Writing from the London School of Journalism. I have been a regular contributor to Cornwall Today (Regional Magazine of the Year, 2009) since 2008 writing regular walks, features, antique pieces, health, business and humour. I have interviewed Bill Bryson, Ian Rankin, John O'Farrell, Patrick Gale, Lionel Shriver and Rosamunde Pitcher for Writers' Forum and Cornwall Today. My work has also appeared in Classic Boat, Classic Sailor, Woman's Weekly and Nursing Standard. Discover Cornwall, my first book of Cornish walks was published by Sigma in June 2012, Walks in the Footsteps of Cornish Writers in 2014, Walks in the Footsteps of Poldark in 2015, Walks in the Footsteps of Daphne du Maurier in 2018 and Walks in the Footsteps of Rosamunde Pilcher in 2019. I am also a seaside landlady, and live in Cornwall with my Romanian rescue Lainy. My partner lives on the Lizard so I am fortunate in having two beautiful places to explore. I keep sane by singing, writing, walking and seeing my wonderful mates.