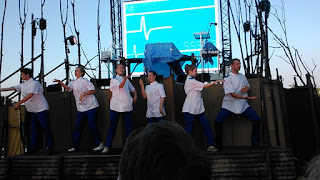 This was a scene from Wildwork's wonderful production of 100: Unearth, which I was fortunate enough to see at Heligan Gardens last week.
It celebrated 100 years since the end of the First World War, and those from the parishes around Heligan returning from fighting (those that did) but also encompassed the Greek tragedy of Orpheus and Eurydice to emphasise the loss and tragedy of war. Having said that, there were some incredibly funny parts, such as the part above, where all the 'nurses' from the Underworld were helping to prepare for a heart operation.

What was unusual was that it was a walk around show - we walked from one set to another all round the gardens which, for me, added to the enjoyment, though not everyone thought the same. There was also a tremendous band that accompanied the performers, the sets were incredible, and all in all, it was a unique experience that I shall never forget.

In complete contrast, last night I went to see Mamma Mia 2 with a group of friends from singing. Having enjoyed the first film so much, and seen it I don't know how many times, I was pretty sure I'd enjoy it, despite some rather lukewarm reviews. And it didn't disappoint. From the first scene, we were off - there wasn't really much plot but it didn't matter - we were swept along by the terrific numbers, the choreography and the sheer joy of it all. We sat with our drinks and snacks, wept (in my case), sang loudly and laughed and suddenly two hours had gone. I was very much in need of being cheered up, and it certainly did that.

But it made me think about enjoyment of things - plays, films, music, whatever. I tend to go along and get absorbed into a performance, rather than analysing them. I suppose the downside could be that I might miss things - the deeper meanings or whatever - but the upside is that I am rarely disappointed. I have been raving about both productions, whereas not everyone I know thought the same.

A friend of mine said recently, "Keep your hopes high and your expectations low." A hard balance to find - but in this instance, I used another friend's motto which is, "Go with the flow". And that certainly worked. 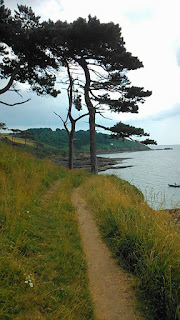