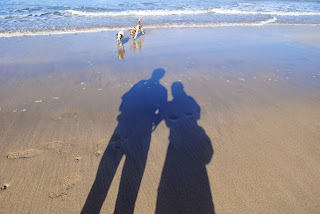 The above picture has nothing to do with this post, but I felt like a soothing picture.
Shadows at Godrevy.

About a month ago a friend started having a really difficult time - not of her own volition. Just one of those incredibly unfair situations that life sometimes throws at you.

She is brave, highly intelligent and with a great capacity to see the funny side of things - even in this horrendous situation. She’s a private person, but has confided in me, which I take as an honour. A responsibility. Her poor partner is obviously also struggling - it is such a horrendous situation - but it does mean that we have all become much closer.

Yet the ripples affect us all. And that’s scary.

Her partner is at least able to talk to Mr B, and we took them out on Echo the other day, had a lovely afternoon.

God knows what the end result of this mess will be. I’d like to think a new chapter for all of us, and a better one.

But whatever happens, I have gained a sister/daughter and dear friends. We have become family. And for someone who doesn’t see her own family much, that is incredibly important.

The importance of a bolt hole 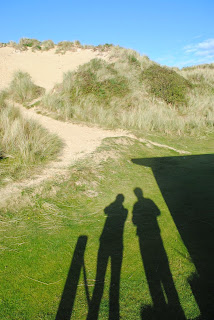 Years ago, in my early twenties, I fell in love for the first time with a fellow who, according to my aunt, looked like Humphrey Bogart. He was incredibly attractive, somewhat insecure, and all my family and friends knew it wouldn’t last. When I found him in bed with one of his clients, I felt as if my world had fallen apart. Well, it had.

It took a long time to get over having my heart broken for the first time, but the best advice was given to me by my grandmother. She was in her 70s, having given birth to my mother in her mid 40s, but nothing phased her. She just gave me a huge hug and said, “Remember, darling, always have a bolt hole.”

I thought she meant a little hideaway - I expect she did - but I have also come to realise that a bolt hole could be inside my head. Writing is one of my bolt holes. Singing is another. Walking and sailing are two others.

A few weekends ago we stayed in a chalet at Gwithian Towans. It was a reasonable size, clean, had everything you’d need for a few days away, and was only 45 minutes from Falmouth - or would have been if we hadn’t had several stops on the way. And that magnificent lighthouse was smiling at us over the dunes.

So I have found another bolt hole, and hope to return there soon.

As stress levels have been mounting with my nearest and dearest, it looks like finding this bolt hole is perfect timing! 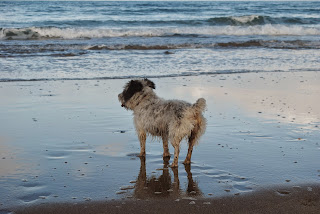 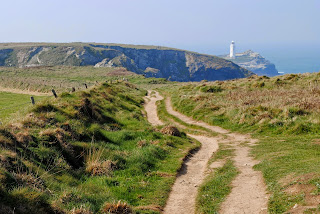 Last week, having spent an exhausting morning in B&Q (the perils of being a landlady), then several hours unloading building materials, we decided, as it was a glorious afternoon and Getting Near the End of Summer, to make the most of the weather.

We headed down to Godrevy, my mum’s favourite beach as a child, to have a scamper along the beach and, as it was low tide, pick mussels. We were so lucky - it was a wonderfully hazy warm afternoon, there was a slight breeze and, not having been there for a while, the lighthouse is always stunning. In fact it’s got to be one of my favourite beaches, too.

There is a certain rock where large mussels grow that is only visible at low tide and we got there just in time, having had a wonderful walk over the dunes and onto the beach. Moll sheds her 9 years and becomes a puppy again, roaring over the golden flat sands with pure joy, ears streaming behind her. We picked several bags of mussels and then decided to stop at the Blue Anchor (a favourite pub) on the way home.

“Shall we have fish and chips?” said Mr B, tummy rumbling.
“We’ve got mussels,” I pointed out.
He was convinced I was going to give him food poisoning (which he’s had before from mussels) but after a pint of Middle was prepared to give it a go. I checked with Mel (my cooking advisor) just to make sure, and we soon made a meal of steamed mussels, with a white wine, garlic and coconut sauce served with noodles, peppers and prawns.

The mussels were so fresh you could taste the sweetness and the sea, and it was one of the more memorable meals I’ve had. And neither of us got food poisoning.

Just as well. I would never have heard the end of it. 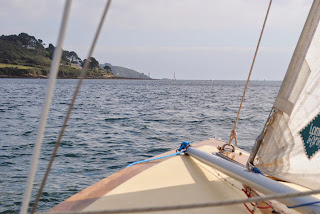 Snap was lifted out for the winter yesterday, so a quick goodbye to sailing on her for this year....

I decided to have a quiet weekend. Al and I had a marvellous sail on Wednesday but it was quite blowy, and the following day my scar hurt like blazes which frightened and frustrated me. I was told I’d just overdone things: not to worry, but i did feel very wobbly for a bit. Since then, the scar has settled down a bit which is a great relief.

But all that crying exhausted me, so I thought I’ll have a few days to myself. So I cancelled lunch with a friend on Saturday, knowing I was singing at a gig that night, and settled down to enjoy a bit of R&R. Good book, sun shining, walks with Moll, time to myself.

At midday a friend who lives upstairs turned up in tears. I won’t go into details but she’s had some really bad news. I gave her a cuddle, dispensed man size hankies and listened. Later, as she clearly needed a change of scene, I suggested she came down to Mylor, so we went down to bail out Echo and take Moll for a walk.

I got back, had an hour or so lie down then went out to the gig. Which was great. Exhausting but great fun.

Sunday I was in Lidls when my phone rang. The above friend’s partner was really worried because she was in agony and did I know a doctor he could ring? I advised to ring the out of hours service at the surgery and said I’d be back ASAP.

I legged it back and upstairs to find the poor thing writhing in agony on the bed. The out of hours people rang back and I said could they get someone to come here as she was in so much pain. He said yes but not for 6 hours. If we could get to Helston she could be seen in half an hour.

As they don’t drive, I said OK, and we legged it down to Helston. Joe was sitting, bend double on a chair in the back of the van with Moll. (My van doesnt have seating in the back) while M, his partner, sat in a lot of pain in the passenger seat, a bowl at her feet for when she wanted to throw up.

I drove, rubbing her back with one hand and driving with the other. Every now and then I would pass the bowl up for when she needed it. From the back Joe asked, "you feeling any better?"

Eventually we got to Helston hospital where they gave her a prescription and Joe tried to straighten his spine and collect it from the massive superstore that is Tesco. It took him about half an hour as it was so busy, and finally we headed back home.

As she was still in so much pain, I said I’d be on call for the rest of the day (what there was left of it), but luckily the very strong painkillers kicked in and by 7pm she was looking a lot more human.

I breathed a sigh of relief, and poured myself a glass of wine.