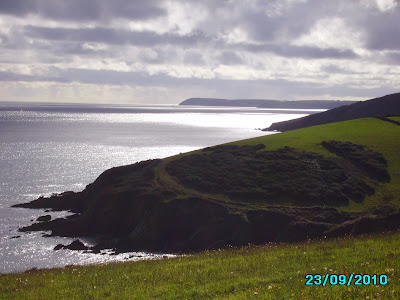 This is one of my favourite walks near Fowey - on the coastal footpath leading towards Gribben. Every time I do it my heart leaps.

I'd forgotten just how difficult it is to settle back into work after a good holiday. And it was fabulous. We had a great weekend with friends when we arrived, which included a trip in the blow up boat (named Inflated Ego) up to Golant, via Cannabis Creek.

Deb and I walked back, exploring Cannabis Creek on the way back – you could see why it was so named (when the Sawmills Studios were first in operation), and Himself did a wonderful job on the catering front.

Altogether we had fabulous weather, and a few days to ourselves, when we had a boat trip up the river to Lerryn, again in amazing weather. Molls and I did a new walk every day, walked miles and then on the Wednesday two more friends came for more walks and general hilarity.

As Himself's breathing isn't too good, hills are difficult (and Fowey is built on a very steep one). Luckily, he found he could walk into town then get the town bus back free courtesy of his bus pass, which gave him quite a thrill. He and John sloped off to the pub just like two schoolboys playing truant, and both were able to come back free on the bus, glowing with alcoholic naughtiness.

We left last Friday and it gave me a real wrench to drive off the Bodinnick Ferry and leave Fowey behind. God knows what I was in my past life but I certainly lived in Fowey.

And now it's back to work. It's chucking it down with rain and, having just transcribed an interview from the way home, I feel I need a lie down. But I have signed Himself up for a photography course and he has to go in today to meet the tutor. The reasoning behind this is that a) I hope he will enjoy it and give him an interest (he takes very good pictures already) and b) I don't have time to go, so he can pass his learnings on to me. DAMN - just had a phone call to say the government have cut the OAP discount so he won't be able to do it. What a shame.

So life returns to normal, whatever that is. Himself is painting the bathroom – for the third time in as many weeks – don't ask. I've told him that I am DEFINITELY having a shower tomorrow, come hell or high water. So don't come and see us till then.
Posted by Flowerpot at 10:58 22 comments: 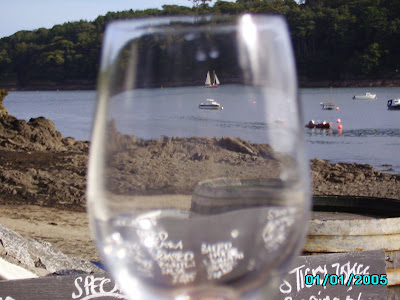 Affairs of the Heart - a 4 CD compilation of Ralph’s love songs with introduction by Rory McGrath
Somewhere Down the Road - pre-order from www.ralphmctell.co.uk
Ralph is performing at Hall for Cornwall on Wednesday 10th November 2010.
Posted by Flowerpot at 09:56 20 comments: 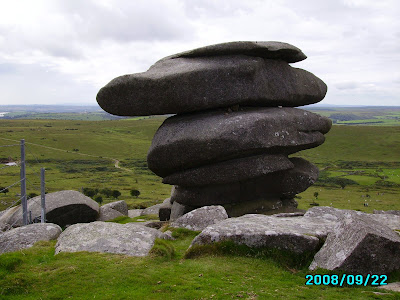 No, I know this doesn't look like Ralph McTell. This is the Cheesewring - see below.

I'm beginning to get that panicky feeling in my guts as I'm interviewing Ralph McTell on Friday. A few nerves are useful before an interview, I find: it means I'm not complacent (not a word in my vocabulary) and ensures that I've done all the research and preparation needed. Ralph is such a consummate musician, poet, song writer – and has been doing it for so long, I really admire him. Also he gave up smoking after 37 years – another point in his favour.

So the reason for my nerves is because I really want to do him justice. By all accounts, he is a lovely, friendly, sensitive man (as well as being hugely talented) with a family and a self deprecating sense of humour, so I'm sure it will be fine. But even so ...I only hope the poor man hasn't got interview tedium – I know he's been doing a lot over the past few weeks.

(Note to self. Do not drink cappuccino while doing interview. When I interviewed Patrick Gale, I rushed to the loo afterwards and noticed I had a chocolate moustache which must have been there throughout the entire interview. Not the kind of impression I really wanted to make.)

And now onto other things. The other week we did a walk for CT round the Cheesewring and the Hurlers on Bodmin Moor where we spent a lot of time getting lost.

Firstly, Viv's navigational skills were a bit off, so we spent a good half an hour driving round in circles before we found Minions village, where we parked. I'd read about a cave where a Mr Gumb (a mathematician and astrologer) lived with his wife and 13 children, but despite asking lots of people, who looked at us in utter comprehension, we couldn't find the cave, and arrived at the bottom of Stowe's Hill cave-less.

Then our directions told us about Rillaton Barrow, and for some reason Viv became fixated on finding it. We asked a couple who turned out to be German, but they hadn't heard of it, neither had anyone else we asked. As we neared the end of the walk, Viv became quite despondent. “I don't want to go to my death bed without having seen this Barrow,” she declared.

No sooner had she spoken, than we passed an old shed with a wheelbarrow sitting outside. “Look, there's my barrow!” she said, and walked on, somewhat mollified. When we finally made it back to the van, we collapsed and fortified ourselves with the last of the sarnies and a flask of tea that Viv had brought and sat in comfortable silence. 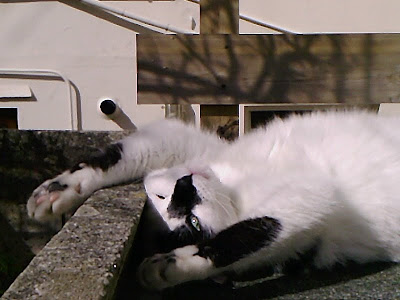 With Tony Blair's autobiography out today, excerpts are splattered all over the papers and one political journalist on breakfast news had read an advance copy – over 700 pages of it – and confessed to TB having “used his usual charm” so that by the end of the book the journalist found he “almost liked” TB.

This got me thinking - what is charm and how is it manifested? Himself and I were discussing it while walking the Molls this morning and, of course, our views differed.

“It's to do with words,” said Himself.

I think he's right but I believe it goes further than that. I think that charm is the ability to make the other person/people believe they are important and special. Which of course is done with words – and actions. A well placed hand on the shoulder. A smile and a hug. Tears maybe. A sense of empathy.

And then comes the difference between CHARM and CHARMING. I think charm is a gift, whereas being charming is something that most of us can learn to a certain extent, though some are better at it than others (mentioning no names of course). For example, a salesman or politican has to persuade people to buy that TV or vote for them. They have to persuade people that they are right. That they know best. Is this learning how to be charming?

When I asked Himself who he could think of who had charm, he replied, without a sliver of hesitation. “Me.”

So who can you think of who has charm? Other than my husband, of course.
Posted by Flowerpot at 09:30 20 comments: