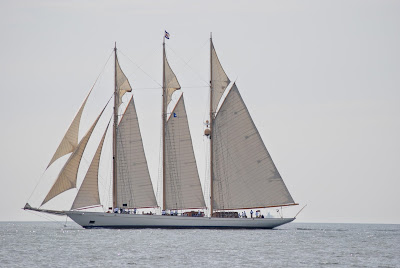 I was lucky enough to be invited on the spectator launch for the Pendennis Cup, yesterday. This is an event where classic super yachts race round Falmouth Bay and they are just awe inspiring in their beauty. The event is held every two years and the yachts - and their crew - come from all over the world to take part. The above picture is of Adix, one of the bigger yachts.

It was a day I will never forget. And I’m wearing my free Pendennis Cup t shirt as I write.

Meanwhile I am preparing a talk for the Penzance Literary Festival and tomorrow I go to interview a boat designer in Lostwithiel. On Saturday I am out on the water on a friend’s boat watching the Red Arrows as they fly over for the last day of the Pendennis Cup. At least - we hope so - last year they cancelled due to low cloud.

Next week I will need a rest….. 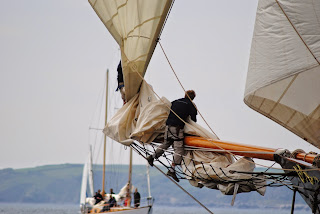 A spot of summer 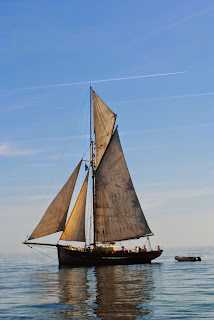 As you can see, this lot were becalmed....

Summer came to Cornwall for about four glorious days last week and we made the most of it. It was actually too hot for Moll to walk in the daytime - she crawled behind the sofa at home and when we went out, panted and lay down in the shade.

But on Thursday I wore my favourite skirt to singing - “Summer’s arrived,” remarked Mr B, and we went out on Echo that afternoon which was fabulous. There was little breeze and we motored out near St Anthony’s Lighthouse where we cut the engines and drifted for a while, savouring the peace of the afternoon. Later we had a picnic at Restronguet Creek and it really was a wonderful day - Cornwall at its best.

Then on Saturday I was lucky enough to go out for the day on the lone sailor’s boat, Brigus, for the first time. I was a bit apprehensive about getting on and off it, and also how Moll would cope but both were achieved with no hassle and there was plenty of shade on board for Moll, which was a relief. We sailed over to Helford and had lunch there, then took Madam for a walk through the woods before sailing out towards the Manacles and back home to Falmouth where I was dropped off around 9pm. Another really fabulous day.

I sincerely hope it’s possible to have more of these trips - Echo has become very dear to me over the years, and when you don’t have children, dogs and boats become even more special. As do their owners, of course. 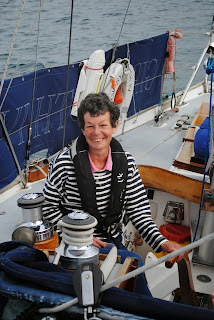 This is the publicity shot I'm going to use for the Penzance Literary Festival - me on Gypsy Moth IV last year.

I’ve just been asked to give a talk at the Penzance Literary Festival in July which has thrown me somewhat. I’m busily writing some words and trying to think how to incorporate pictures into it. There aren’t that many of me sailing so I will have to have a good think about this. Still, it’s great to be asked, and I’m delighted that the Penzance Literary Festival has grown year on year - I have been part of it since the first one so it’s wonderful to see it thriving.

As I write, the sun is blazing outside and I am getting excited. All being well I’m hoping for a trip on Echo in the next few days, and the lone sailor is taking his boat out and has asked me if I’d like to go for a sail on Saturday. Moll is coming too, and I’m not sure how she’ll take to it, but I can take her for a walk before and after, and you never know - she might take to it.

Getting on and off the boat could be a problem but I talked to my specialist nurse who said as long as I’m careful, and don’t pull anything when I’m on board, it will doubtless do me good.

The prospect of one, if not two boat trips in as many days has got me so excited I can’t sleep. I feel just like a child on Christmas Eve. And there’s a high over us so the weather looks set fair till Sunday.

If I was a glass half empty person I’d say that something’s bound to go wrong. As I’m not, I’ll hope for the best and just enjoy begin on the water again. 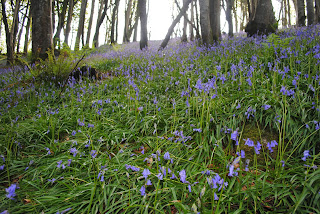 Went to Constantine Woods with the lone sailor - and the bluebells are out!

Publishers don’t like coincidences in novels. Which is strange, given how often they occur in real life.

When I was in hospital, all the staff were fascinated by the fact that I’m a sailing correspondent. I daresay it sounds very glamorous, which it isn’t, but it does mean I get to write about what I love doing, and who wouldn’t want to do that?

The question they all asked was, “have you got your own boat?” The answer is sort of, but I’m promiscuous when it comes to loving boats. I own half a dinghy (Piran) with Mr B. He has a small motor boat called Echo that he calls mine because of the time I’ve spent looking after her while he’s been away.

Last summer we were walking through Mylor harbour car park when we saw someone working on a beautiful wooden boat on a trailer. I said, “we were just admiring your lovely boat”. It turns out it’s a Dragon classic boat called Snap, which he’s kept at Mylor in the summer months for many years but never sailed much as he lives in Derby and doesn’t have crew here. Mr B’s arm shot up. “I’ll crew,” he said. I gulped (we’d only just done our course, but I wasn’t going to be outdone.) “And me,” I said.

I gave Alan my card and he laughed. “Kittow,” he said. “Another Cornish name. I’m Alan Dale. From Redruth. The boat’s going in the water Monday, then I’ll rig her Tuesday. How about a sail on Wednesday?”

We said yes, jumped up and down a bit then went back to the car. “I wonder if he’ll ring,” said Mr B. But the following morning, when I was out with MollieDog, he did. We met Alan on the Wednesday, had the most fabulous day sailing and from then on we became his official crew, and raced with him in Falmouth Week. We met his wife, and they have become dear friends. And we hope to race with Al in Falmouth Week this year.

As if they weren't enough boats, a few months ago I met the lone sailor and we’re going sailing on his 35’ cruiser. Unfortunately we can only go out on spring tides, and I have to wait a few more weeks until I’m fit, but that’s something else to look forward to.

Last year I stopped writing the walks for Cornwall Today, but became sailing correspondent which has opened up all kinds of amazing opportunities.

I don’t know why publishers don’t like coincidences for they happen all the time. Or perhaps I just attract more of them than most.

This time last year, we had booked a sailing course, but I hadn’t been sailing for many years. This year, I can’t wait to get back on the water. Several people have asked me what I hope to do this year, and I say, “get to be a better sailor. And write about it.”