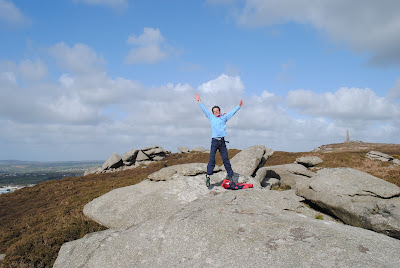 Above picture taken on Sunday during an eventful walk at Carn Brae. Yes we got lost. No surprise there. But at least I wasn't map reading.

And on to other matters. Yesterday I got the following email:-

I am delighted to tell you that you have made the top 20 list of Novelicious Undiscovered 2012. The full list can be found at
http://www.novelicious.com/2012/04/novelicious-undiscovered-the-top-20.html

We will be showcasing each of the entries through out May ready for the public vote at the start of June. You are more than welcome to tweet, facebook and encourage people to vote for you, but we will not accept repeat voting and will have a system in place to prevent this.

Please do get in touch if you have any questions, and WELL DONE!

WELL! As one of my best mates is about to depart for a while, this is good news indeed. So please have a look and vote for FOUR LEFT FEET by Sue Jackson.

I’m also hoping to go on a trip to Scilly – I’ve just written a piece on the Scillonian’s 35th anniversary so have a trip for 2 (well, 3 with Moll) so we’re hoping to head off end of this week. Though given the forecast, this could be a bumpy ride!

And nearer to home, Mum is going to be in a nursing home for a while but has started reading again which is good news. Given her state of mind, she wants cheerful books to read. I’ve ordered some Mary Wesley which she’s read already but always stand re-reading. Anyone got any ideas for other uplifting but interesting novels? 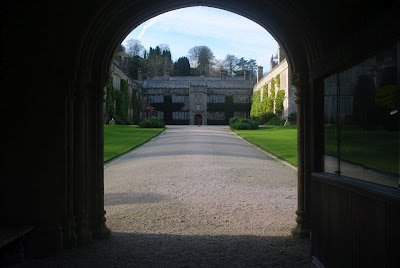 But of course it’s never as simple as that. What do you think?
Posted by Flowerpot at 09:24 14 comments: 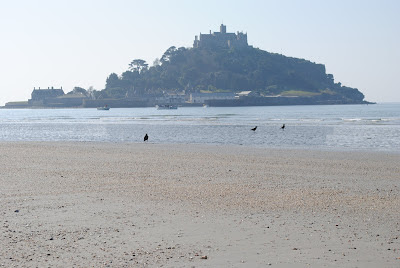 My weekend was full of lovely friends, good music and fun. A welcome interlude in a somewhat stressful time. But life always has its ups and downs, doesn’t it? It’s a question of enjoying the good times, savouring them and holding onto the images for when the bad times come. While the good times may not last, it's encouraging to know that the bad ones don't either.
Posted by Flowerpot at 10:04 10 comments:

The good days - and the bad 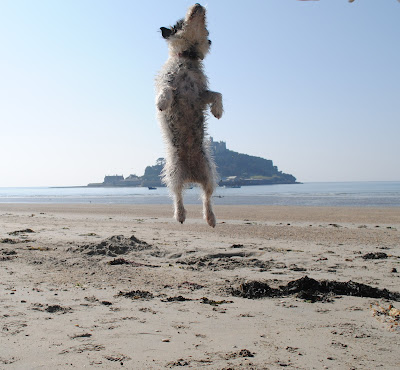 It’s always difficult coming back to work after a holiday, but life has been somewhat of a rollercoaster since then. To start with, the weather was so wonderful last Wednesday that a friend and I decided to go down to Rosudgeon car boot sale. So we set off on a perfect morning with the sun beating down on us like a blessing, got to Rosudgeon to find that the car boot doesn’t start until after Easter. Still, it was so lovely we headed off to Marazion and spent an hour on the beach with Mollie - as you can see above, she had a great time.

From there we went to Penzance for food, then Rinsey Cove for a sunbathe and paddle – sunbathing – in March! A quick trip to the Blue Anchor in Helston, then back home as I was going to meet a dear friend who’s just come back from New Zealand. A perfect day…..

Then, checking my phone, I found a message from one of my brothers to say Mum had had a fall so he and his wife were going down on Wednesday instead of Thursday to see her. The next day he rang to say Mum had fallen in the night and smacked her head on a dresser, had to be taken to hospital. There they found she was severely dehydrated and her sodium and potassium levels had gone haywire leaving her very confused.

To cut a long story short, she’s still there. Luckily she has agreed to go to a nursing home for recuperation, but the phone has been hot between me and my brothers and a poor confused and paranoid Mum.

On Monday, as my brother had returned home we had a phone call to say she’d just dislocated her hip, which would postpone her discharge. I felt I should belt up and see her, and a dear friend offered to come with me. She took one look at me as I arrived at her place. “I’ll drive,” she said. And dear of her, she did. So I was able to spend a couple of hours with Mum and we drove back that evening, feeling decidedly shaken and jetlagged, but glad that I’d seen her.

Life was beginning to feel like the nightmare it had been when Pip was so very ill. Panic fluttered inside me like a trapped bird, and I felt as if someone was trampling on my guts with heavy black boots, dragging me down this long dark familiar tunnel.

Thankfully it seems Mum is recovering well and I’ve just had a call to say she’s being discharged to the nursing home this afternoon. As my Dad died when I was in my twenties, I never had to deal with him getting old. I have a feeling this road with Mum could be a long, difficult and painful one for all of us.
Posted by Flowerpot at 10:14 35 comments: