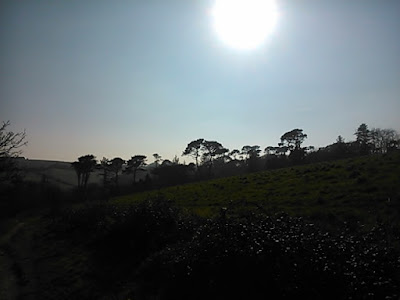 My brain is frazzled. It's known as Deadline Looming Frazzle. I've got all the material together, but the photographs aren't as good as I would have liked, given the fact that we've had 4 months of the wettest winter known for 100 years.

I'm not entirely happy with the directions on one of the walks, so several of us are going to do that again on Friday, when there should be a break in the weather, and I'd like to get better pictures of Caerhays Castle, if possible, which might happen on Sunday or Monday depending on the weather.

Apart from that, the text is all written, collated, edited and proofed and checked. The maps are done, ready for sending. I'm still collating the pictures in Dropbox ready for sending. And I've written the Introduction and the blurb on the back.

As it's Easter, various friends are arriving, and ringing up wanting to meet which is lovely but doesn't fit in with getting this book out. So if I sound fraught - I am, but it's nothing personal!

In amongst all this is the feeling of impending loss looming. I've packed a year's worth of work into six months which has been very rewarding, but leaving it - and sending it off, out of my hands - is terrifying. Think empty nest syndrome.

I tried to explain this to a friend last night who isn't a writer and he looked at me as if I was made. Well, I am, but it's very common for writers. It's just how it is, and one of the difficulties you have to live with. I have to get back to journalism when this is over and earn some much needed money - and that is something I love doing as well - but books are something special. They snuggle into your heart and linger there, and this one is particularly special. Partly because it's Poldark and partly because all the material is new, rather than walks I may have used before.

So think of me on April 1st. My deadline will be over - and met - and I will feel bereft. Ready for new projects.

On a lighter note, last Sunday, we did a flashmob in Lidls in Penzance and the singing really lifted my heart and my spirits. I listen to it when I'm feeling fraught.....

Sorry I have been trying to insert the link but it won't oblige! If you look on my Facebook timeline it's on there....!
Posted by Flowerpot at 11:21 7 comments:

Dartmoor and first walk of spring 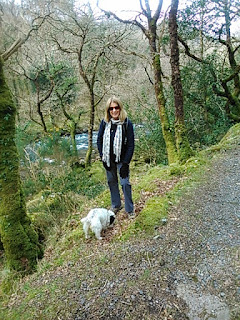 Last weekend saw an overdue visit to my mum, and some Dartmoor walks with my dear mate Av. After months of really horrible weather, it was a joy to wake up, several mornings running, to a sun drenched garden with birds singing their heads off.

We explored Ashburton, had some lovely grub and walked miles. All in all, a lovely weekend, so I daresay we will return... 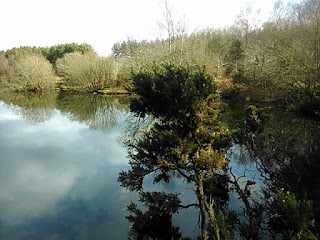 In the meantime, I've got steam coming out of my ears trying to finish the book before the end of the month so excuse me, must dash... 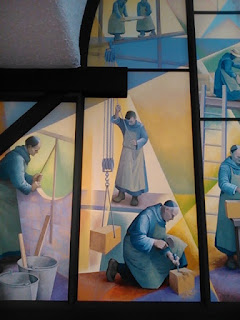 Part of the amazing mural at Buckfast Abbey, where we had a coffee to revive drooping energy levels.
Posted by Flowerpot at 18:36 4 comments:

Vole hunting and teeth out 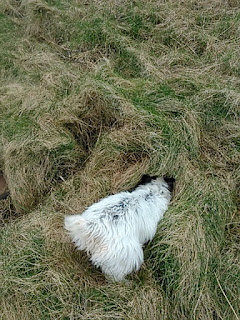 This was taken on Sunday when we went down to Gunwalloe and walked along the cliffs to Church Cove and Dollar Cove, on the Lizard. As you can see, Moll was busy vole hunting and enjoyed her last day of teeth before having to go to the vet on Monday to have some removed - they weren't quite sure how many till they got her there, as she doesn't like having her mouth looked at.

For anyone who doesn't know, gum disease is just as prevalent in dogs as humans, particularly with increasing age, and tooth brushing is ideal. However, if you have a dog like Moll who hates having her teeth brushed, you have a problem, which turns into gum disease, which means having teeth out.

We picked her up on Monday afternoon, all groggy from the anaesthetic. Poor love was really confused and couldn't settle, spent all evening and that night whimpering (that was a long night) but by the morning she'd settled a bit. This afternoon she'll be able to go for walks again and her appetite doesn't seem to have been affected (mind you, nothing affects her stomach).

As from tomorrow it's all change again. I'm off to Devon to see my mum and my dear mate Av for a few days, then I have another trip to Penzance next weekend, while Mr B departs to Lanzarote for his annual trip for two weeks.

The book is nearly finished. I'm going through final edits, we're trying out ideas for the cover, and I have this horrible sense of impending loss. You know when you get really stuck into a book, and feel really bereft when it finishes? Well, magnify that feeling about a hundred times and you get some sense of what it's like when you finish writing a book. So I shall be quietly (or loudly) bawling my eyes out and working on my next project - which is finding more journalism to pay some bills.

There is an idea in the pipeline for another book but I don't know what my publishers will think. They will probably want to see how this one goes. But we will see..... 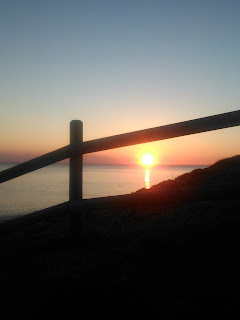 Sunset at Burton Bradstock a few weeks ago.... seems like yesterday...
Posted by Flowerpot at 11:17 9 comments: 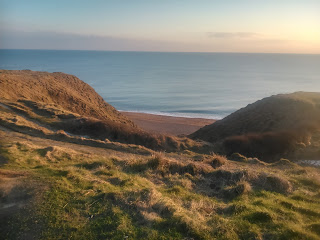 Dorset was a really lovely break - so good we didn't want to come home. The weather was kind to us - it only rained twice I think - and despite a few health hiccups, it was just what was needed.

I also saw my dear friend Av which was a bonus, and drove home in torrential rain which made me value the good weather all the more.

It was my birthday on Sunday and, not having expected anything, I had a wonderful day. C took me out for breakfast, then Fiona and I did the last walk for the Poldark book, stopping at Charlestown for a drink, where we bumped into Av and her husband again! That was followed by a lovely meal cooked by friends, so I felt truly lucky.

Now of course it's back to work with a vengeance - I have two weeks to finish the book in. And I left my brain in Dorset. Come back please all is forgiven, and I need you....... 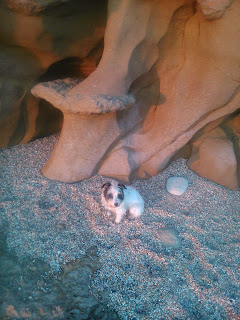